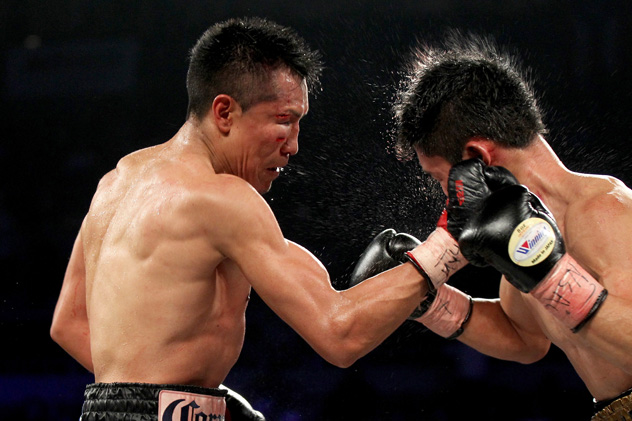 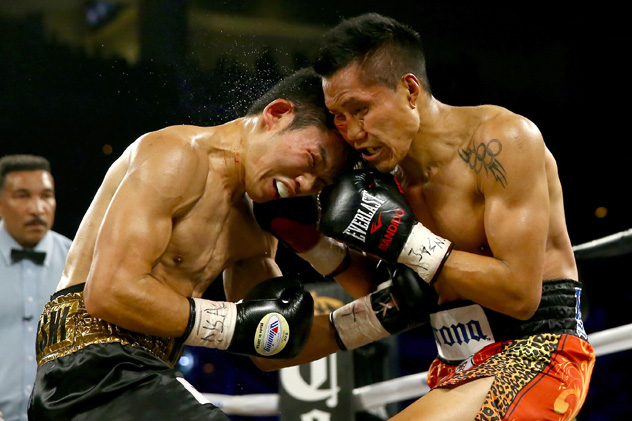 LAS VEGAS – If the minimalist artistry of Guillermo Rigondeaux put you to sleep and the mini-concert by Puerto Rican reggaeton singer Yandel made you wonder if you tuned into the right pay-per-view show, the slugfest between Takashi Miura and Francisco Vargas woke you up and reminded you that you’re watching boxing.

It also reminded you that when boxing is good it produces the highest drama in professional sports.

Vargas rallied to stop Miura in Round 9 of a Fight of the Year candidate in the co-featured bout to the Miguel Cotto-Canelo Alvarez HBO Pay-Per-View event. The unbeaten technician from Mexico City had to get up from a knockdown, fight with a badly swollen right eye and miraculously recover from being badly rocked at the end of Round 8 to win his first world title, the WBC 130-pound belt that the Japanese puncher had defended four times.

“This is a dream come true for me, something I have been fighting for my whole life,” Vargas said after the fight. “I knew Takashi was going to be a tough opponent, that’s why he is the champion, so I had to make sure I was prepared to face a fighter like him. I feel that my preparation paid off for this fight.”

Miura (29-3-2, 22 knockouts), who made three defenses against Mexican challengers (and won his title by knocking out a Mexican national), earned the “Mexican Assassin” moniker. However, that nickname looked like a lot of hardcore fan hype in the opening round when Vargas badly wobbled Miura and pummeled the Japanese champ until the bell.

Vargas (23-0-1, 17 KOs) continued to punish Miura with lead rights and body shots in Round 2, but the 31-year-old southpaw began to land his vaunted left by the end of Round 3. Miura took firm control of the shootout when straight left put Vargas down in a neutral corner at the end of Round 4.

Miura continued to land his left (along with hard rights to the body) as Vargas’ left eye rapidly swelled in Rounds 5 and 6. Vargas began to work his way back into the fight with a brutal body attack in Rounds 7 and 8, but in the final seconds of the eighth Mirua rocked the 30-year-old Olympian from Mexico City.

As Vargas stumbled back to his corner, his right bleeding and eye nearly shut, most thought it was over for the Mexican fighter. Sitting on his stool, Vargas must have of known the fight was close to being stopped due to the condition of his eye, so he did what real fighters do in that situation: he stormed out of his corner at the start of the next round and tried to kick some ass.

“I knew I had to be very aggressive, and I showed that in the first round so he knew that I would not be bullied,” Vargas said. “When I was knocked down in the fourth round, I felt even more motivated to win this fight.

Vargas dropped Miura with a vicious left uppercut early in Round 9. The brave Japanese fighter got up on wobbly legs but let referee Tony Weeks know that he was willing to fight back by throwing his arms out and nodding his head.

Miura was willing but he was no longer able, as Vargas pounced on him like a mad man with thousands of fans chanting “Mex-i-co!”

Weeks did the right thing and stopped the bout at 1:31 of Round 9.

“I made sure to fight the way I wanted, how I wanted and my style and now I’m the champion of the world,” Vargas said. “I hope all the fans enjoyed themselves tonight with my performance.”

Vargas’ come-from-behind victory whipped the Mexican fans into a frenzy, serving as the perfect appetizer for Cotto-Alvarez. Actually, since the fight surpassed the main event in terms of action and drama, maybe it serves as a set-up for an anticipated rematch. That’s what Mirua wants.

“I’m very disappointed and upset I got caught in the first round,” he said. “I recovered and after that I thought I was winning the fight.

“I think if I could have clenched better (I could have survived). I would definitely like a rematch.”