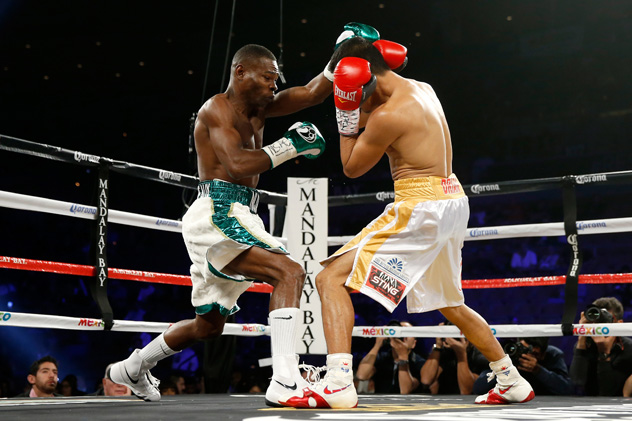 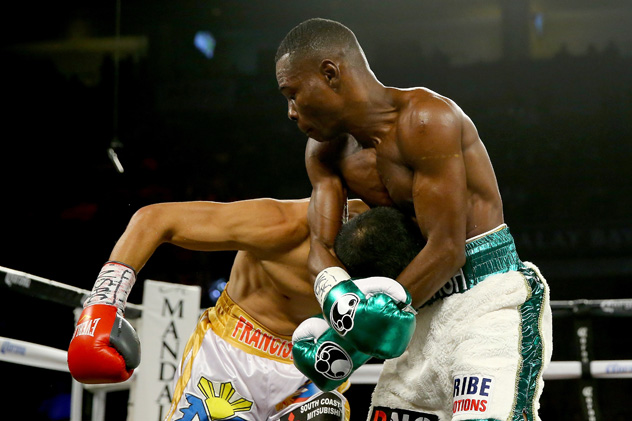 Guillermo Rigondeaux (R) puts Drian Francisco in a headlock during their 10-round fight on Saturday in Las Vegas. Photo by Isaac Brekken – Getty Images.

The return of Guillermo Rigondeaux was not very warmly received by anyone watching boxing, much less an incensed crowd at the Mandalay Bay Events Center who arrived for what was expected to be a fight of the year candidate with Miguel Cotto and Saul “Canelo” Alvarez squaring off later in the evening.

Rigondeaux did next to nothing but pulled out a unanimous decision victory over Drian Francisco in his first fight since last December.

And if this is any indication of the future, Roc Nation Sports had better figure out something fast because the great Cuban fighter has become a fighter nobody wants to see. This was the perfect stage and perfect opponent for Rigondeaux to showcase his talent and he did little to nothing with it. The bloodthirsty crowd wasted no time showering the arena with boos as Rigondeaux backed up and waited for his opportunity to counter. However, Francisco wouldn’t give him many opportunities, as he was wary of the Cuban’s lauded counterpunching ability.

There were few exchanges and even fewer punches landed. And for a talent like Rigondeaux, that is unacceptable. Even worse considering that he was fighting on a pay-per-view with more eyeballs on him than before.

This all amounted to a lot of posturing and staring as Rigondeaux landed only 72 of 347 punches while Francisco could only muster up 42 punches landed out of 228. Rigondeaux never attempted to put his foot on the gas. Meanwhile, Francisco was flustered and unable to get to the two-time Olympic gold medalist.

It was ultimately a 10-round snorer that saw Rigondeaux earn the 100-90, 100-90 and 97-93 scores from the judges. He may have won the fight, but winning over fans will be a far tougher challenge. 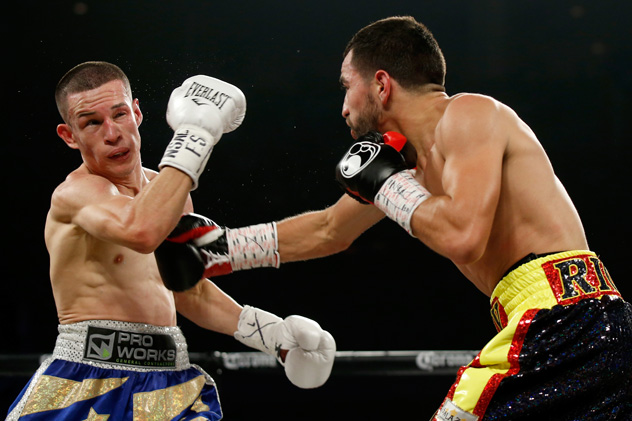 In a bit of an upset, featherweight Ronny Rios (25-1) and his disciplined work to the body helped him earn a unanimous decision victory over previously undefeated Jayson Velez (23-1-1).

Velez started fast out of the gate with crisp combination punching in the early rounds but Rios refused to be deterred and committed his attack to the body. However, that commitment nearly cost him as referee Jay Nady took a point away from Rios for low blows in the fifth round. But that only incensed Rios as he and Velez engaged in a battle of hooks that got a rise out of the crowd. Undeterred by the point deduction, Rios continued to run down Velez and eventually it paid off as the bodywork slowed his Puerto Rican opponent down in the later rounds. With Velez fading, Rios kept pounding away and took home the decision with scores of 97-92, 95-94 and 96-93.

In lightweight action, Alberto Machado made short work of Tyrone Luckey with a first-round TKO. After sending Luckey (8-5-2) down with a left hand earlier in the round, a left-right combination from the Puerto Rican dropped Luckey a second time. Smelling blood in the water, Machado (12-0) finished the job and collect his 10th knockout with a barrage that forced the referee to step in and call a halt to the 2:44 mark.

In a pretty entertaining battle of unbeaten junior bantamweights, Jose Martinez (16-0) kept his goose egg in the loss column intact by handing Oscar Mojica (8-1) his first defeat via 8-round unanimous decision. Despite having a height and reach advantage, Mojica decided to keep the fight in the phone booth but ended up being outworked and eventually outpointed by the more accurate and busier Martines. Scores were 78-74 across the board.