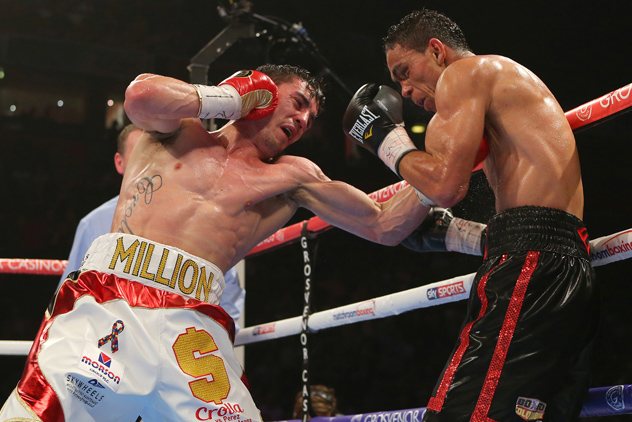 There were scenes of wild celebration in Manchester, England, on Saturday, as local hero Anthony Crolla scored a superb fifth-round body shot knockout over Columbian Darleys Perez to snatch the WBA lightweight title in a rematch of their July encounter.

The first bout, also staged in Manchester, ended in a controversial majority draw and a return fight was quickly negotiated. Crolla, who performed brilliantly last time, upped his game once again and a perfect left hook to the liver sucked the oxygen from the visitor’s lungs and he was never beating the count.

“I’ve dreamed of this since I was 10 years old,” said Crolla, who is currently rated No. 10 by THE RING at 135 pounds. “I was confident that I would get him out of there but I thought it would be a head shot. Still, I’ll take that body shot any day of the week.

“I’ve worked so hard and I want to thank my team. My trainer, Joe Gallagher, has turned my career around when most people wrote me off. I’m looking forward to more nights like this in Manchester.”

Perez appeared to be far sharper this time around and was finding some nifty counters although, by a shade, Crolla still enjoyed tactical superiority. He was busier than Perez and the versatility in his game, as it did in fight one, seemed to frustrate and annoy the crafty Columbian.

There are few people who would begrudge the new champion his moment in the sun. Three years ago, Crolla wouldn’t have been your first choice as a future world champion but his success is a workman’s compensation, mixed with a minor miracle. Overcoming a brutal assault that left him with a fractured skull, a fractured ankle, and a fractured future, the affable 29-year-old has bounced back from a heartbreaking draw to fulfill his dreams.

Perez, despite retaining his title in controversial circumstances last time, must be commended for travelling to the U.K. twice in the space of four months. The 32-year-old is a game operator but, for the second time of asking, was unable to impose his authority on the Englishman and this stoppage will be hard to take.

All three are trained by Joe Gallagher, who is coming to the end of a wonderful year in the sport.

Both fighters weighed in at 134 pounds.