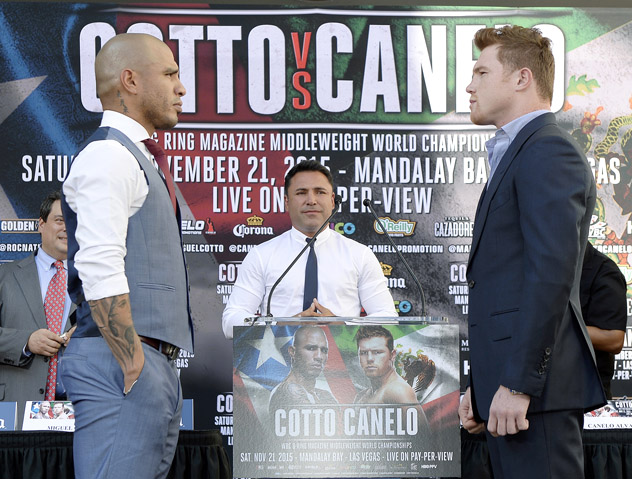 There has been this lingering suggestion that Saturday night’s showdown between Miguel Cotto and Saul “Canelo” Alvarez is missing a certain buzz to bring in the casual fight fan. Although it is an almost guaranteed barnburner that will only be heightened due to the heated rivalry between Mexico and Puerto Rico, it’s difficult to gauge whether the pay-per-view buys will justify the hefty purses that Cotto and Canelo are set to earn (reports suggest between $15-17 million for Cotto and roughly $10-12 million for Canelo).

Maybe it’s because Cotto isn’t such a great interview subject and Canelo is limited because of his English. Or, perhaps the casual fan is still suffering from the hangover of Ronda Rousey losing to Holly Holm and is strapped for cash with the holiday season nearing. If you ask Oscar De La Hoya, it has less to do with either of those things and all because of Floyd Mayweather Jr.

“The casual fan has shied away from the sport because of the Mayweather-Pacquiao fight,” the Golden Boy Promotions CEO told RingTV.com. “The fight was dull and the casual fan was expecting a war. When you think boxing, you think Hagler-Hearns; you think action. It was a Mayweather fight and that’s what he does. He’s a master boxer but that’s not what the fans wanted to see. Now it’s our job to bring them back.”

De La Hoya believes that this is the perfect fight for anybody who is remotely interested in boxing to watch. However, he understands that getting people to cough up $70 after they were burned by the far from exciting bout between Mayweather and Pacquiao is going to be difficult. As a matter of fact, he believes this fight would have done much better had it taken place before Mayweather-Pacquiao.

“This fight probably would have done the same as my fight with Mayweather with around 2.5 million buys,” De La Hoya said. “Nevertheless, this fight has an uphill battle to climb in hopes of eclipsing the million mark or coming close to the 1.5 million buys that De La Hoya has predicted. He warns that if fight fans skip out on this fight, they’ll surely regret it.

“I think this fight can be better than Trinidad-Vargas,” De La Hoya said in reference to the knock down, drag out brawl 15 years ago between Mexico and Puerto Rico that was both highly anticipated and wildly entertaining. “There’s way too much pride at stake to not have action. Don’t miss out!”