Guillermo Rigondeaux ready to prove he’s best in the world 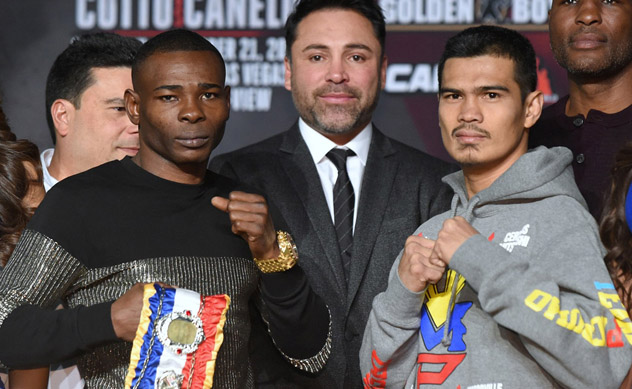 LAS VEGAS – Even at the age of 35, Guillermo Rigondeaux believes that his boxing career can have a new life. The man who is known as one of the greatest amateur fighters of all-time has been waiting patiently to prove that he can translate those two Olympic gold medals he collected back in 2000 and 2004 into professional success.

Last year should have been the year that the Cuban sensation broke out. Instead, he’s been sidelined, rejected and stripped of his 122-pound world titles (except for his RING belt). That’s not the way a two-time Olympic gold medalist should be treated.

But now Rigondeaux finds himself in a new situation as he has left Top Rank for Jay Z’s Roc Nation while splitting with manager Gary Hyde. The move has found him in a prime position, as he will compete for the first time in 11 months on the undercard of the highly anticipated Miguel Cotto vs. Saul “Canelo” Alvarez pay per view at Mandalay Bay on Saturday.

Like his new promoter said in his song “Public Service Announcement,” Rigondeaux would like you to allow him to reintroduce himself.

“Roc Nation is a company that I’m very happy to be signed with and they have the potential to take me to where my career needs to be,” Rigondeaux told RingTV.com as he prepares to face Drian Francisco. “Top Rank had me on the shelf and they didn’t do their job. I’m going to leave that in the past though and look forward to fighting two or three times next year.”

Although he is unbeaten and recognized by Ring as the No. 5-rated pound-for-pound fighter in the world, he’s yet to become a household name due to inactivity. Some have called Rigondeaux boring due to his style that is more calculating than full on brawler, but he’s no more boring than Floyd Mayweather Jr. Bob Arum stated that he was HBO wanted nothing to do with him, regardless of his remarkable talent. But Rigondeaux believes he ended up being a sacrificial lamb for the promotion after Arum’s plans to build a certain Filipino star off of the Cuban’s name went horribly wrong.

“It was more Top Rank’s fault for keeping me off the network than HBO,” he said. “Top Rank was upset because I beat Nonito Donaire. I beat everyone they put in front of me. They sign them to fight me, I beat the s__t out of them and then they throw me off HBO.”

Rigondeaux took Donaire to school when the two met in 2013. Donaire, then primed to become the heir apparent to Manny Pacquiao, was completely dismantled by Rigondeaux in a surgical performance that should have led him to bigger fights. However, that certainly wasn’t the case. Let Rigondeaux tell it, he spoiled Arum’s plans and paid the price with his career. He has only fought three times since then and realized after his last fight on New Year’s Eve that changes needed to be made.

He has joined a stable of fighters over at Roc Nation that includes Cotto and fellow Olympic gold medalist Andre Ward in hopes that he can put himself in line to retrieve the world titles he was stripped of and lures the best fighters in the world to face him.

“It’s more important for him to win on Saturday night than to go for the knockout,” Rigondeaux’s trainer Jorge Rubio explained. “He was out one year so once he gets the win it will be time to look at fights with Abner Mares, Leo Santa Cruz and Vasyl Lomachenko.”

Rigondeaux is currently campaigning at junior featherweight (122 pounds) and says that his first goal is to regain his titles but isn’t against facing some of the bigger names if “the money is right.” But in the end, it’s all about staying busy, being visible and proving to the world that he’s the best fighter on the planet.

“I’m a winner and I want to win so I have to be more active so people can see me win,” Rigondeaux said while pointing out that he expects to fight again in February or March. “Who is better than me?”

It appears that we’ll have to wait and see.