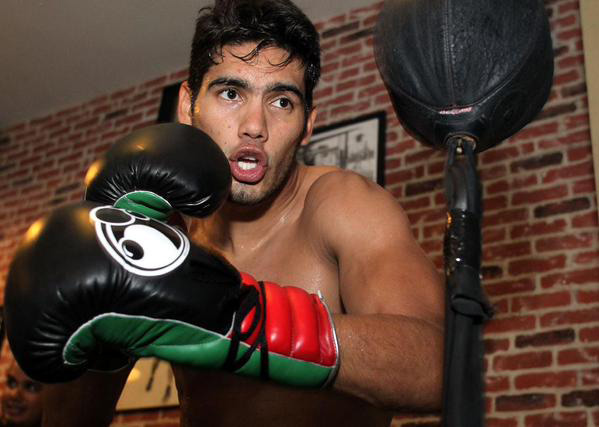 If he really wanted to, Gilberto Ramirez would not need to fight.

He would wait until it was time to cash in on facing WBO super middleweight champion Arthur Abraham.

But that is not who Ramirez is. The 24-year-old wants to remain active, fighting often and perfecting his craft in the gym.

The results have been impressive: an unbeaten record and becoming a mandatory challenger to fight for the WBO title. While Abraham defends the WBO title against Martin Murray this Saturday, Ramirez will be in action on tonight.

Ramirez will fight Gevorg Khatchikian inside the Chelsea Ballroom at The Cosmopolitan of Las Vegas, Nev. The 10-round bout will headline a ‘MetroPCS Friday Night Knockout’ telecast on truTV, beginning at 10 p.m. ET/ 7 p.m. PT.

Aside from being the mandatory challenger to the WBO super middleweight title, Ramirez is ranked No. 4 in the division by THE RING magazine. He is also ranked No. 2 by the WBC and the WBA.

In his last bout on June 26, Ramirez pounded out a one-sided victory over Derek Edwards in Hidalgo, Texas.

Ramirez (32-0, 24 knockouts), who hails from the boxing hotbed of Mazatlan, Sinaloa, Mexico, will face Khatchikian, a fighter from the Netherlands who has won his last three bouts in a row. Khatchikian’s only defeat was at the hands of James DeGale in March of last year.

While Ramirez is favored to win tonight, he is not overlooking Khatchikian (23-1, 11 KOs), especially with an opportunity to fight early next year for the WBO title.

“Aside from his record, I do not know a whole lot about my opponent,” Ramirez told RingTV in an interview over the phone. “He may seem like a dangerous fighter but we’ve trained for any style my opponent brings. We don’t want any surprises.

“Every fight is important and I’m grateful for my team for the work we did in camp.”

Like most young kids who take up the sport in Mexico, Ramirez looked up to Julio Cesar Chavez Sr. While Ramirez is a southpaw (his nickname is ‘Zurdo,’ which means ‘lefty’ in Spanish), that did not stop him from picking up the fight game.

Before formally entering a boxing gym, Ramirez was getting into fights on the streets of Mazatlan at the age of 12.

“I would watch boxing with my father every Saturday,” said Ramirez, who is promoted by Top Rank Promotions. “There were times I would fight in the streets, sometimes two or three times every day. We would use gloves or, sometimes, we wouldn’t use gloves.”

Ramirez stopped fighting in the streets once those in the gym began taking notice he was outboxing and beating others during sparring sessions. After turning pro as an 18-year-old, Ramirez has made a name for himself as a contender over the last year.

While most people in boxing have asked, “when” instead of “if,” when it comes to Ramirez fighting for a world title, he does not want to get ahead of himself.

“Fighting for a world title would be great but I have an obligation in front of me on Friday. The work and dedication I have demonstrated in the gym as a pro has paid off. The fights in and out of the ring have prepared me for where I am now. I want to get better with every fight.

“I want to continue to work hard and improve as a fighter. I’m grateful what I’ve accomplished has been recognized by those, especially boxing fans. I actually do not want to disappoint them.”