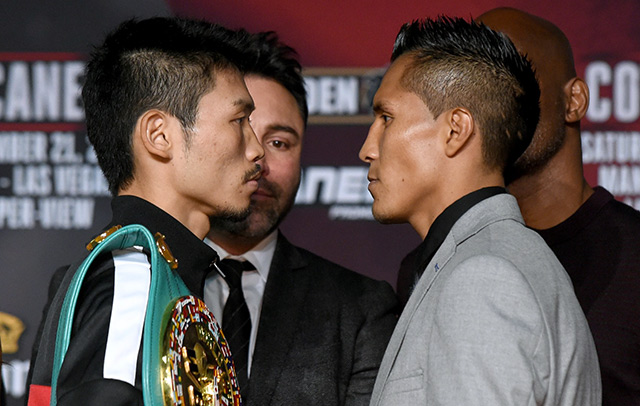 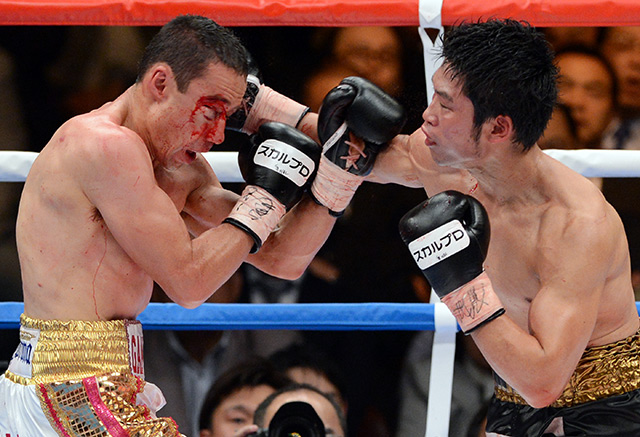 LAS VEGAS – One of the key story lines of the Miguel Cotto-Canelo Alvarez fight is the storied boxing rivalry between Puerto Rico and Mexico.

However, another national rivalry will be on display in the co-featured bout to Saturday’s HBO Pay Per View main event when Takashi Miura, of Akita, Japan, defends his WBC 130-pound title against Mexico City’s unbeaten Francisco Vargas.

Japan vs. Mexico isn’t nearly as personal or celebrated as the Mexico vs. Puerto Rico rivalry is among fans, but it’s almost as fierce once the fighters are in the ring.

Hardcore boxing fans familiar with Miura and Vargas expect just as much action from the junior lightweight co-feature as they do from Cotto-Alvarez, maybe even more.

“I’m honored to be fighting on this great undercard,” Miura (29-2-2, 22 knockouts), THE RING’s No. 2-rated junior lightweight, said during the undercard press conference on Thursday.

“This is my first time fighting in Las Vegas and I’m going to make a statement. I’m going to win by knockout and defend my title.”

Miura has reason to be confident. The 31-year-old beltholder has won nine consecutive bouts, six by knockout, since losing a WBA 130-pound title bid against countryman Takashi Uchiyama in January 2011. The heavy handed southpaw dropped Uchiyama (THE RING’s No. 1-rated junior lightweight) in the third round before being stopped after eight rounds. 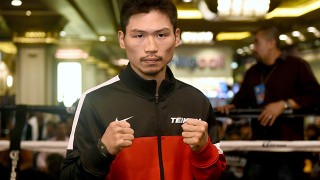 Miura’s win streak includes a ninth-round stoppage of Gamaliel Diaz (to win the WBC belt) in Tokyo in April 2013 and impressive title defenses against Sergio “Yeyo” Thompson, Dante Jardon and Edgar Puerta. All four opponents are from Mexico. Miura’s unanimous decision over Thompson (in YeYo’s native Cancun) in August 2013 was a savage fight in which both fighters were knocked down and battered. The Fight of the Year candidate vs. Thompson, as well as his stoppage victories over Jardon and Puerta, have earned Miura the “Mexican Assassin” moniker in Mexico and Japan.

“The nickname was not my idea,” Miura told RingTV.com through translator Nubo Ikushima, of Teiken Promotions, on Wednesday, “but I’m happy people think of me that way.”

Miura, who is promoted by Teiken, says he wants to follow in the footsteps of recent Japanese titleholders who have defended their belts against respected Mexican fighters.

“I want to be like Toshiaki Nishioka, who defended his (WBC 122-pound) title against Jhonny Gonzalez in Mexico and Rafael Marquez here in Las Vegas,” he said.

It’s not uncommon for top Japanese and Mexican boxers to lock horns in lighter-weight class title bouts. Both countries have a history of producing outstanding fighters in the sub-135-pound divisions. In recent decades, Mexican fighters ranked from 118-to-126 pounds have traveled to Japan where they could vie for world titles and make healthy paydays. 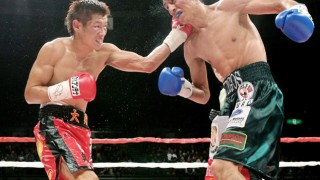 Hozumi Hasegawa (left) slugs it out with Juan Carlos Burgos.

In the 1990s, hall of famer Daniel Zaragoza traveled to Japan to regain the WBC 122-pound belt against Kiyoshi Hatanaka. He defended that title in Japan against Tsuyoshi Harada and popular slugger Joichiro Tatsuyoshi (twice).

In the 2000s, Oscar Larios (a Guadalajara native and longtime member of Alvarez’s team) defended that same WBC 122-pound belt against Manabu Fukushima and Shigeru Nakazato on the challengers’ home turf. He closed out his underrated career splitting 12-round decisions (in WBC featherweight bouts) with Takahiro Ao in Japan.

It first became common to see Japanese and Mexican fighters duking it out in a boxing ring in the late 1960s and early 1970s, when the rivalry often took place in Mexico or the greater Los Angeles area.

Mexican legend Ruben Olivares defeated Takao Sakurai at The Forum in Inglewood in 1969 to earn his shot at the bantamweight title held by Lionel Rose. Olivares was just as popular in Southern California as he was in Mexico, but more than a few Japanese fighters made names for themselves slugging it out in front of Los Angeles fans during his era. 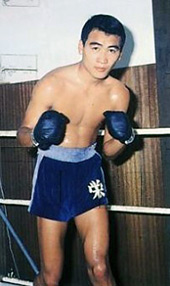 “They were never in bad fights,” said hall-of-fame matchmaker Don Chargin, who made many of their bouts (often against Mexican nationals) that took place at the Olympic and other Los Angeles venues.

“Saijo beat (WBA) featherweight champ Raul Rojas in a non-title 10 rounder and then beat him over 15 rounds for the title. Both fights were in L.A. The first was at the Olympic, the second was at the (Memorial) Coliseum.

“Another Japanese fighter who was never in a bad fight was (Shinichi) ‘Buzzsaw’ Yamabe. He was a lightweight and Mexican fans loved him at the Olympic. We often used Japanese fighters on cards in the Sacramento area where there’s a Japanese community.”

Miura’s style is much like that of Yamabe, a left-handed brawler who lived up to his nickname.

“I’m an aggressive fighter that goes for the knockout,” Miura told RingTV.com. “I think Vargas is similar. He’s got power and he throws a lot of punches. I’ve seen him. He can fight. He’s got enough experience to deserve a shot at the title.”

If both fighters uphold their nation’s rich boxing history their co-feature will live up to expectations.