Cotto: Real or Illusion – From THE RING Magazine 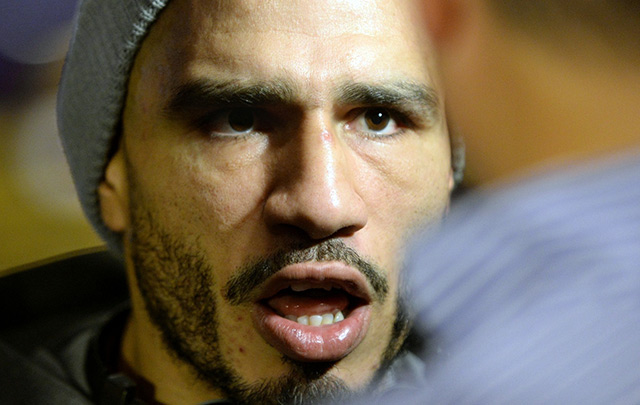 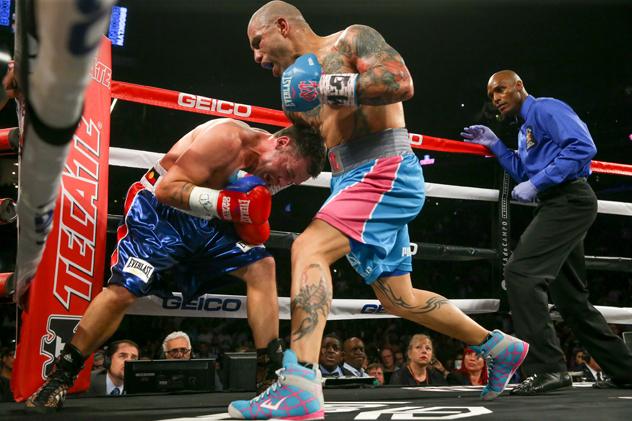 Note: This feature originally appeared in the December 2015 issue of THE RING Magazine

SOME BELIEVE FREDDIE ROACH IS THE REASON BEHIND MIGUEL COTTO’S RESURGENCE, SOME DON’T!

Casey Stengel is enshrined in the National Baseball Hall of Fame for having managed the New York Yankees to 10 American League pennants and seven World Series championships, including a record five in a row from 1949 to 1953.

Yes, that would be the same Casey Stengel who in 1962 guided the expansion New York Mets to an historically awful 40-120 record in which they finished 60¾ games behind the pennant-winning San Francisco Giants. If he were still around, it would be reasonable to assume that the “Old Perfessor” would say it makes a big difference being able to write Mickey Mantle’s name onto a lineup card instead of Marv Throneberry’s.

It is much the same with boxing trainers. An astute, knowledgeable trainer can help a talented but perhaps underperforming fighter go to the next level, but even Hall of Fame cornermen can’t make pugilistic Throneberrys into Mantles. There has to have been some good material to begin with for any celebrated trainer to work his magic.

There are only two absolute certainties regarding the Nov. 21 title bout at Las Vegas’ Mandalay Bay between 35-year-old Miguel Cotto, THE RING middleweight champion, and 10-years-younger Canelo Alvarez. One is that Cotto’s celebrated trainer, Freddie Roach, the only man ever to win Trainer of the Year from the Boxing Writers Association of America seven times, has worked with more than 20 world champions and is already in the International Boxing Hall of Fame. The other is that Cotto, the only Puerto Rican fighter ever to have won world titles in four weight classes, also will be inducted regardless of the outcome of his showdown with Alvarez.

If the reputations of the respective trainers were the sole determining factor of who wins this much-anticipated matchup, Cotto would probably be the pronounced favorite. The resume of Alvarez’s trainer, Jose “Chepo” Reynoso, includes Canelo but no one else of note.

It should be noted, however, that Reynoso has been with Alvarez since the red-haired Mexican turned pro at the improbably tender age of 15, and that Roach, more of a troubleshooter who takes on established fighters at various stages of their careers, will be the chief second for Cotto for only the fourth time. In his three fights with Roach, Cotto – who had lost back-to-back decisions to Floyd Mayweather Jr. and Austin Trout with then-trainer Pedro Diaz – has been almost spectacularly impressive in dispatching Delvin Rodriguez, Sergio Martinez and Daniel Geale.

All of which begs a question: Has Cotto’s seeming career revival owed at least in part to astute matchmaking as much as to Roach’s ministrations? It has been suggested that Cotto’s current winning streak has been crafted against opponents it would have been difficult for him to not look good against.

Opinions will differ, of course, and THE RING sought input from trainers Teddy Atlas, Ken Adams, Naazim Richardson and Tommy Brooks, as well as from former heavyweight champions Evander Holyfield and Larry Holmes, all of whom have their own thoughts on the matter.

Count Adams and Brooks among those who believe Cotto’s recent resurgence owes in large part to Roach’s keen eye for making the proper adjustments and refinements, both technically and psychologically.

“If a trainer knows his stuff, it’s very possible to (have a major positive influence),” said Adams, a 30-year veteran of the United States Army who coached the 1988 USA boxing team and later worked with six fighters who won world titles in the pros. “You have to be repetitious about doing things. You have to drill those things into your fighter until they become second nature. If you can do that, you can turn a guy around. It all comes down to how willing a fighter is to listen to what you’re telling him.

“Freddie Roach has turned other fighters around and it looks to me that he’s helped turn Cotto around too. A lot of it is because the guys he has worked with had faith in him when he got them. His reputation, which is deserved, was such that they believed he was capable of taking them to that next level. Half the battle is a fighter being receptive to what you’re trying to convey to him. Cotto is smart enough to know that what he’d been doing wasn’t working as well as it once did. He went to Freddie and, well, you can see the results.”

Brooks is even more resolute in saying that Roach has had a positive effect on Cotto’s career uptick.

“In my opinion, Freddie should get most if not all of the credit because he brought Cotto back to the basic fundamentals,” said Brooks, who has worked with, among others, Holyfield, Tyson and Meldrick Taylor. “I mean, what did Pernell Whitaker and Mike Tyson have in common? Well, both were very talented but they had different kinds of talent. Whitaker was a master boxer and Tyson could knock a guy out with one shot.

“If you have that kind of power, it becomes easy to get dependent on it. Cotto, I think, had gotten used to just knocking guys out. He had forgotten about how to use his boxing skills to set his man up for the knockout. Freddie got Cotto back to those fundamentals.”

Less convinced are Atlas, Richardson, Holyfield and Holmes, all of whom said it takes more than a new trainer’s dictated shift in direction to instantly improve any fighter.

“The first thing you have to look at is who has (Cotto) been fighting,” said Atlas, now an analyst for Premier Boxing Champions on ESPN and a bit of a contrarian by nature. “It’s easy for any trainer to become the flavor of the month or the flavor of the year of whatever if he’s working with a fighter who already has a substantial body of work. Some fighters might have gone stale for a while. But if you match them up right, they’re going to look good no matter who’s training them. That’s not the answer some people want to hear but it’s the truth.

“I’m not sure what Freddie has done with Cotto just yet. I don’t know if it’s a mirage. Cotto knocked out a shot Delvin Rodriguez who was an older guy and who was never an elite-type fighter. He knocked out a completely shot Sergio Martinez who was, like, 42 years old (actually 39) and coming off knee surgery. In his last fight, he knocked out (Daniel) Geale, who’s in his mid-30s, was forced to come down in weight and has been known to quit. He quit against (Gennady) Golovkin. These are the guys that Cotto dispatched since he’s been with Freddie.

“Look, Freddie is touted as one of the top guys in the business and he is. Being able to make necessary adjustments is part of his makeup. I consider myself to be one of the trainers who can do that. But, really, this next fight against Alvarez will be more of an accurate barometer of where Cotto is now.”

Richardson, best known for his work with Hopkins, said that “Freddie Roach is an outstanding coach but I think we have to question the quality of the opponents Miguel has been beating since he’s been with Freddie. Miguel looked great against Sergio Martinez but how much of that was Miguel being good or Sergio being bad? And I don’t think Miguel should get too much credit for the Geale fight.

“I’m not doubting Freddie but I just don’t know what Miguel has left off of those three fights. But we’ll find out against Canelo. Canelo is a young, strong bull. He’s for real.”

Holyfield was one of boxing’s most persistent tinkerers, having worked with trainers Georgie Benton, Lou Duva, Don Turner, Emanuel Steward, Brooks and Ronnie Shields. He also employed at various times conditioning coach Tim Hallmark, ballet instructor Marya Kennett, strength coach Chasee Jordan and computer analysts Logan Hobson and Bob Canobbio. But Holyfield said anyone who has fought as long and as well as Cotto probably already knows all he could ever learn from any late addition to his corner team.

“If enough time has gone by, you already know what you know, especially if you’ve made a connection with the people you’ve worked with in the past,” Holyfield said. “If somebody new comes in and tells you to do something you don’t know, you might hesitate. And if you hesitate, you’re going to get hit because you’re trying to figure out what to do instead of just doing what you already know and do well.

“I’m not going to say Freddie Roach hasn’t helped Cotto. Freddie has something that resonates with certain individuals. It’s not just Cotto; he’s done it with other fighters. But it don’t make no difference what kind of coach you are if the fighter don’t believe in you, don’t trust you and don’t do what you ask him to do. If that’s the kind of relationship you have, it don’t matter how much the trainer knows. It’s a situation that won’t work.”

Holmes more or less is of the same opinion but perhaps more stridently so.

“It’s mind over matter,” Holmes said. “If Cotto don’t mind, it don’t matter (who trains him). The man can fight. I don’t think there’s too many trainers who can teach you to fight better if you’ve been fighting all your life and fighting successfully.

“A lot of trainers, they don’t know s–t. I watch all these guys fight. There’s only a couple that know how to jab. They throw roundhouse punches. Cotto does too. How is Freddie Roach going to teach him the right way to jab when he wasn’t a jabber himself? I’m not going to give too much credit to any trainer. If a fighter don’t have it in him he’s not going to do it unless he wants to do it.”