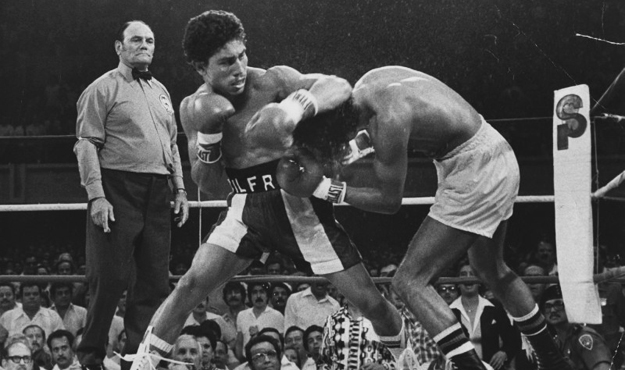 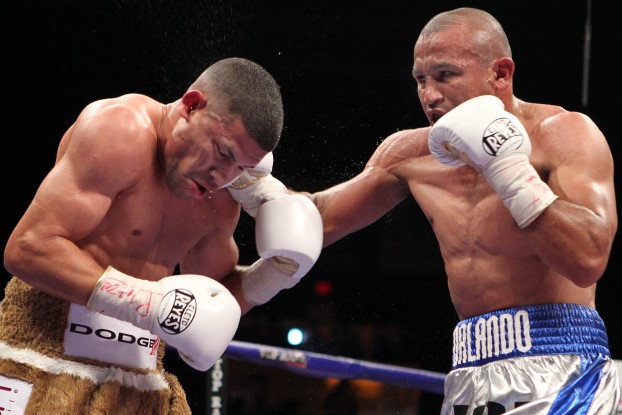 This article originally appeared in the December 2015 issue of THE RING, a special double-cover collector’s edition that includes a Cotto vs. Canelo poster which is still on sale and can be purchased here.

The Mexico-Puerto Rico rivalry is the fiercest and most celebrated in boxing. When Puerto Rico’s Miguel Cotto defends his RING magazine and WBC middleweight titles against Mexico’s Canelo Alvarez on Saturday in Las Vegas the proud representatives of each nation will continue a decades-old tradition.

Background: Ortiz made the first defense of his junior welterweight belt against Torres, an undefeated Mexican knockout artist known as “The Reynosa Rattlesnake.” Torres was game but Ortiz used his superior skills to stop him at 2:56 of the 10th. Torres was never quite the same. He’d lose by KO eight times during the next seven years, as if Ortiz had fatally exposed the glass in his jaw.

Background: With a left hook that could shake the walls of a city, 18-year-old Cuevas won the WBA welterweight title by dropping Espada thrice in the second round. The bout served as Cuevas’ dramatic introduction to the boxing world – he was the youngest fighter to win a 147-pound title – and began an impressive welterweight title reign that would include 11 defenses. Cuevas would beat Espada twice more by KO, first in 1977 and then again in 1979.

Background: Undaunted by Zarate’s fierce reputation as a knockout puncher, Gomez flattened Zarate twice in the fourth and once more in the fifth. Zarate’s corner realized their man was done and threw in the towel. The bout, which featured everything from punches thrown after the bell to deliriously screaming Puerto Rican fans storming the ring, shot Gomez to stardom in his homeland.

Background: Sanchez started the show early, dropping Gomez in the first and fracturing his cheekbone. The Puerto Rican hero showed his mettle by surviving the onslaught and rumbling on even terms with Sanchez during the next few rounds. Still, this was Sanchez’s night and nothing would deny him his chance at greatness. He put Gomez on the canvas again in the eighth and though Gomez was willing to continue, referee Carlos Padilla had seen enough. The victory earned Sanchez major acclaim.

Background: Gomez was making a record 17th defense of his junior featherweight title while bantamweight champ Pintor was moving up in weight. The bout was a Fight of the Year candidate, with Pintor bravely absorbing all Gomez threw at him and tossing back his own bombs. Gomez’s firepower proved too much, though. After Pintor suffered the second of two knockdowns in the 14th, referee Arthur Mercante didn’t bother counting him out.

Background: Rosario had previously scored a decision win over Ramirez for the vacant WBC lightweight belt. Rosario, known as “Chapo,” looked to be on his way to another victory by jumping on Ramirez at the start of the rematch. Showing incredible guts, Mexico’s Ramirez survived knockdowns in the first and second rounds to come wailing back in the third. In the fourth, after trapping a dazed Rosario in a corner, Ramirez threw more than 30 unanswered punches before referee Steve Crosson waved the fight over. The intensity of this bout, which was THE RING’s Fight of the Year, seemed to seep right through our TV sets.

Background: Not all of Chavez’s Puerto Rican opponents succumbed easily. Laporte, a former featherweight titleholder, gave Chavez several rough moments, fighting him at close quarters for much of the bout. In fact, Laporte had such a strong 12th round that many of the Puerto Rican’s supporters felt he’d done enough to win. Still, Chavez retained his WBC junior lightweight title and walked out of Madison Square Garden with a unanimous decision win. The scores were 117-112, 115-114, and 114-113.

IVAN CALDERON VS. HUGO CAZARES I

Background: Puerto Rico’s Calderon moved up to 108 pounds after a four-year reign as WBO strawweight boss. Junior flyweight champ Cazares struggled to make weight, but the bout was a 12-round rumble nonetheless. The stronger, harder-punching Cazares found himself cut from a butt in the eighth, which seemed to spur him on. He sent Calderon to the canvas in that round but the slick-boxing “Iron Boy” survived the knockdown, endured a tough ninth and rallied down the stretch to pull out a split decision.

Background: Memories of this bout have been marred by unproven speculation that Margarito fought with loaded gloves. At the time it was revered as one of the best Mexico-Puerto Rico contests ever, with lots of back and forth action before Margarito came on strong to score a late-round stoppage. Margarito enjoyed brief stardom after the bout but a glove scandal going into his fight against Shane Mosley (for which he was suspended), an eye injury and losses to Mosley, Manny Pacquiao and finally Cotto sent him straight to boxing’s junkyard. He has talked about returning to the business, perhaps hoping for a rubber match with Cotto.

Background: This was supposed to be just another day at the office for budding Puerto Rican superstar Lopez but Mexican journeyman Salido withstood all of the heavy leather thrown by the younger man to score a shocking KO in the eighth. Lopez had shown a shaky chin before but few expected him to crumble so dramatically in this bout. The loss put Lopez on an irreversible downhill skid. Along with losing to Salido by KO in their rematch, Lopez suffered three other losses until he finally announced his retirement in 2014.