Ronda Rousey-Holly Holm: What It Means 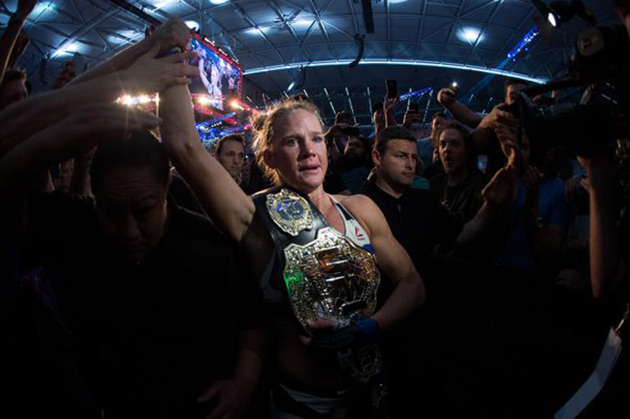 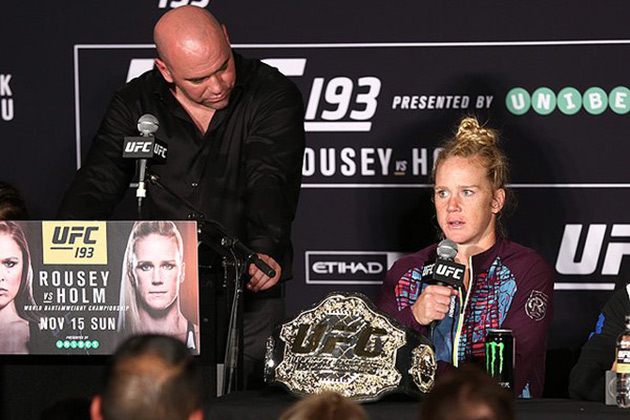 Sports, unlike most forms of entertainment, have no script. Sometimes the narrative unfolds as expected. Sometimes it doesn’t. Once the competition begins, what an athlete has done in the past isn’t outcome determinative. Athletes have to prove themselves anew every time.

Ronda Rousey, age 28, was at the apex of mixed martial arts. Sports Illustrated called her the most dominant athlete in the world today. She’d been on the cover of magazines running the gamut from Maxim to THE RING and verbally outsparred Floyd Mayweather. People piled their expectations onto her shoulders.

Rousey’s arm bar was the equivalent of Mike Tyson’s one-punch knockout power. Iron Mike devastated his opponents. Always. Until the night he didn’t.

Tyson was invincible before Buster Douglas. The invincible Sonny Liston was stopped by Cassius Clay. The unbeatable Joe Louis was knocked out in his first encounter with Max Schmeling.

On Sunday afternoon in Melbourne, Rousey was knocked out in the second round by Holly Holm. Now, once again, combat sports is experiencing the shock of a seemingly invincible fighter losing.

Holm, age 34, turned to professional boxing in 2002 after an early stint as a kickboxer and compiled a 33-2-3 record in the sweet science. During that time, she scored only nine knockouts, which speaks to a lack of punching power. But “power” is a relative term when talking about professional boxers.

In 2011, Holm suffered a brutal beating in a seventh-round knockout loss to Anne Sophie Mathis. She figured out what she did wrong and, six months later, fought Mathis again, winning a clear-cut unanimous decision. Holm is a fighter.

Rousey-Holm was fought on Holm’s terms. She controlled the distance between Rousey and herself with deft footwork and a stiff jab. That and her southpaw stance enabled her to strike effectively when the combatants were on their feet. And she knew enough MMA to blunt Rousey’s counter-maneuvers.

Holm also seemed physically stronger that Rousey; if not at the start of the match, then certainly once Ronda had taken some jabs to the face. As the match progressed, Rousey was reduced to following Holm ineffectively around the ring and walking into more jabs. Holm made Rousey look like an amateur.

Two minutes, 10 seconds into the fight, Holm scored big with a move that’s illegal in boxing. With both fighters in striking position, Holm threw what appeared to be a straight left that fell short by design so her elbow landed flush on Rousey’s mouth. It might have been the most damaging blow that Ronda has been hit with in her life. The elbow split her lip. She wobbled, held on and managed to drag Holm to the canvas. Holm escaped.

Fifty-two seconds into the second round, a straight left deposited Rousey on the canvas. She jumped to her feet and Holm measured her for a left leg kick that landed flush on the neck. That put Rousey down for good, on the verge of unconsciousness and defenseless. Holm jumped on her, landed two more punches to the face and the referee stopped it.

A dazed Rousey needed help getting to her feet and was taken to the hospital for observation. She got beaten up.

How did it happen?

For starters, Rousey’s body looked a bit soft when she entered the ring and she seemed exhausted at the end of the first round. Fighting is a fulltime job. It’s possible that Rousey’s preparation for the fight was hampered by too many outside interests. During the past year, she has modeled, acted in movies and lived the celebrity life interspersed with the seemingly never-ending drama of her personal relationships with her boyfriend of the moment and mother.

Muhammad Ali thrived on chaos. But for most athletes, multiple distractions take away from training and cause them to lose focus. It’s an old story. The popular champion gets a bit lazy in the gym and cuts a few corners. The old intensity isn’t quite there.

Also, one of the biggest mistakes a fighter can make is to buy into the myth of his, or her, own invincibility. Rousey seemed to have become a believer.

When Tyson comes to the gym and tells you what a good boxer you are and Oscar De La Hoya wants to promote your boxing career, and you’re on the cover of THE RING, it’s easy to lose sight of reality with regard to the true level of your boxing skills. You start to believe what people are telling you; especially if the boxers you’re sparring with aren’t well-trained in the art of hurting and aren’t trying to hurt you.

On top of that, Rousey had a lousy game plan for Holm and fought badly, while Holm had a good game plan and fought well. In the past, Rousey succeeded by bum-rushing opponents, getting them on the canvas quickly and ending matters with her arm bar. Here, because Holm was able to master the distance between them and jab effectively, the bum-rush didn’t work.

Rousey started in MMA as an amateur in 2010 after a successful career in judo. She turned pro in 2011. Holm began kickboxing in her teens and took up MMA in 2011. Significantly, the two most damaging blows that Holm delivered during the fight – an elbow to the face in the first round and the finishing leg kick in Round 2 – were MMA moves.

As for what comes next ÔÇª fighters lose. The question now is how will Rousey react to the loss? Will she come back strong as Louis and Ali did after their first defeat? Or will she be forever diminished as a fighter, as happened with Tyson after his loss to Douglas?

Most likely, Rousey is feeling tortured now. Her life has always been marked by emotional ups and downs. An emotional roller-coaster ride lies ahead.

A rematch between Rousey and Holm would be the most lucrative event in MMA history. The current plan is for it to be contested in Las Vegas at UFC 200 in July 2016.

What will be different the next time around? Rousey can’t beat Holm on her feet. The notion that Rousey had somehow become a world-class boxer in addition to her grappling skills was never realistic. In a rematch, she will have to find a way to take the fight to the ground.

Meanwhile, UFC’s biggest star has been defeated. But beating “The Woman” doesn’t make Holm “The Woman.” Like their first encounter, Rousey-Holm II will be largely about Rousey.

Thomas Hauser can be reached by email at [email protected] His most recent book – A Hurting Sport – has just been published by the University of Arkansas Press.