Commentary: Holm’s upset of Rousey is her victory, not boxing’s 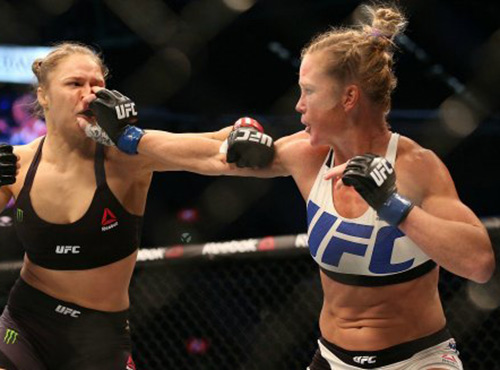 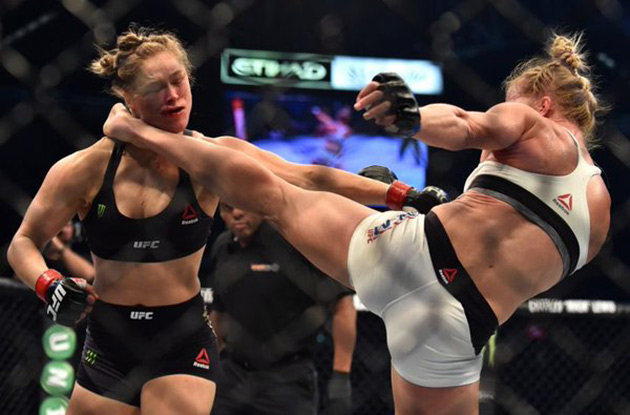 Two days later, we have an answer, and it’s likely that if you didn’t watch the fight yourself, one trip to the internet or a phone call from your non-fight watching mother would have filled you in on the result: a second-round knockout scored by Holm at Etihad Stadium in Melbourne, Australia.

MMA fans and pundits immediately dubbed it the biggest upset in the sport’s history, and the only fight that may come close to matching it was Matt Serra’s knockout of Georges St-Pierre in 2007. St-Pierre bounced back to avenge the loss and become the most dominant welterweight ever seen in the UFC. That’s the good news for Rousey. The bad news is that if Mike Tyson is the parallel, “Iron Mike” was never the same after losing to Douglas in 1990.

And like Tyson’s defeat to Douglas, this one wasn’t pretty. In fact, while Tyson briefly saw daylight when he dropped the challenger in the eighth round. Rousey had no such luck, no moments where it looked like she was turning the tide. Simply put, it was a master class by Albuquerque’s Holm, who avoided Rousey’s vaunted ground game, peppered her with punches behind a stick and move strategy, and then lowered the boom in round two with a flush kick to the head.

But despite Holm’s status as a former three-division world champion and one of the best women to ever lace up the gloves in the ring, this was no victory for boxing. This was a victory for Holm, her team, and her family; a well-deserved one for one of the classiest athletes in combat sports.

As soon as the announcement “And newÔÇª” was made though, social media blew up with the comments of boxers, boxing fans and boxing media members declaring that they knew this was going to happen all along, that a world-class boxer would always win a striking-based fight with a mixed martial artist. Oddly, these folks were nowhere to be found before the fight, with more than a few telling this MMA/boxing scribe that Holm had no business being in the Octagon with Rousey and that this fight would resemble one of the former Olympian’s sub-minute wins.

And sadly, as everyone from Rousey and UFC president Dana White to THE RING were thrown under the bus with refrains of “I told you so,” it wasn’t necessarily to bask in Holm’s victory, but to place blame for the woes of women’s boxing everywhere but where they belong.

Ranting to THE RING about Rousey being on the cover of the January issue doesn’t put a light on the sport and, for the record, the magazine is still the only one in the boxing world to feature women’s boxing every month (full disclosure – written by me). No one in the sport is promoting that.

Want to get a light on women’s boxing? Rant to the promoters and networks who are not giving women a chance to show their skills on major fight cards or on television, not White, who opened the door for Rousey, Holm and their MMA peers.

What about the sponsors who have practically ignored the United States’ lone Olympic Gold medalist in 2012, Claressa Shields? They could use some Tweets and Facebook posts, don’t you think?

Instead, it’s silence when it comes to the real issues facing the sport, followed by the usual process of building stars up but enjoying it more to tear them down. So it’s Rousey’s turn in the firing line. And I get it, her confidence has turned some off, but when you’ve finished every one of your victories, 11 of 12 in the first round, and ended your last three fights in a combined 64 seconds, you can be excused for feeling invincible.

No one is invincible in combat sports though, and as the old adage goes, that’s why they fight the fights. And Holm may have thrown a no-hitter Saturday night. Using her length, distance and movement, “The Preacher’s Daughter” was in control from the start, and though a trip to the canvas midway through the opening round provided some tense moments for her as Rousey searched for a submission, once Holm got loose and back to her feet, it was back to executing a well thought out game plan while Rousey, tired by the end of the round, was left to chase the challenger until that challenger became a champion with a kick to the head in the second.

For Holm, who became the first fighter to win major world titles in boxing and MMA, it wasn’t a boxing match; it was a mixed martial arts match, with her defensive grappling and kicks her primary weapons. That’s no surprise, since she has been kickboxing from when she was a teenager, and has been around the sport in the Jackson-Wink MMA gym throughout. She also turned pro in MMA the same year Rousey did, so the “experts” giving her no chance of winning were far off the mark, at least until Sunday morning, when they all knew that Holm was going to win.

All that aside, Holm’s win opens up the women’s bantamweight division and sets up a whole new set of intriguing matchups for her with contenders Rousey had already defeated. As for the former champion, she will likely get a rematch, but that may not come until next July, when she said she planned on coming back for the promotion’s UFC 200 event. In the meantime, she will return to Hollywood for film projects and will have time to evaluate the loss and make changes if she deems them necessary.

But she will be back. That was evident to me even when the result of the fight seemed to be a forgone conclusion. Holm had taken over in round two and it was clear that she was one strike away from ending Rousey’s reign. Yet the Californian, mouth wide open from fatigue and a split lip, didn’t stop moving forward, didn’t stop chasing Holm, didn’t stop trying to find a way to win in a losing battle. She was no cover girl or Hollywood star; she was a fighter. And this fighter fought until she went out on her shield.

Some never recover from a knockout like that. I’ve got a feeling Ronda Rousey will, making the prospect of a rematch with Holm even bigger. Until then, celebrate Holm’s night AND Rousey’s will to fight. It’s what combat sports – boxing or MMA – are all about.