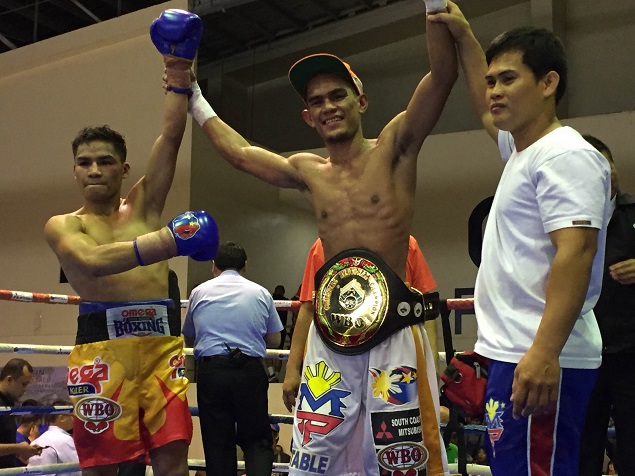 The 24-year-old Palicte seemed on pace for an early knockout after dropping Silvano in rounds one and four, set up by hard uppercuts and body shots that split the southpaw’s defense. Silvano, who is best known for his competent challenge of then-IBF strawweight titleholder Katsunari Takayama in 2013, wouldn’t go away easily, getting through with straight lefts to Palicte’s face in round five.

Palicte began dialing back his attack in the middle rounds to prepare for what could be a long night. Palicte later told THE RING he had hurt his right hand in the fifth or sixth stanza and later resorted to sticking and moving to pile up points and protect his early lead.

The former Philippine national amateur team member Palicte had won all of his bouts by knockout following a fourth round knockout loss to Romnick Magos in 2012. Palicte says he had no trainer at that time; now he’s hooked up full-time with Nonoy Neri, a longtime Manny Pacquiao assistant, while living in Davao City where he trains out of of the MP Boxing Gym.

The night was much shorter for Palicte’s stablemate Jerwin Ancajas (24-1-1, 16 KOs), who scored his 11th straight knockout win, stretching out Paul Apolinario (10-16-3, 6 KOs) with a single right hook for a stoppage at the 31-second mark.

Ancajas, 23, is rated No. 3 by the IBF and No. 11 by the WBO at 115 pounds. The Panabo City, Philippines native has stopped all of his opponents since his lone loss, a majority decision defeat to Mark Anthony Geraldo in 2012.

Friday the 13th wasn’t as lucky for Adones Cabalquinto (21-1, 14 KOs), the previously unbeaten junior welterweight, who suffered his first career loss by first round knockout to Al Rivera (14-2, 12 KOs). 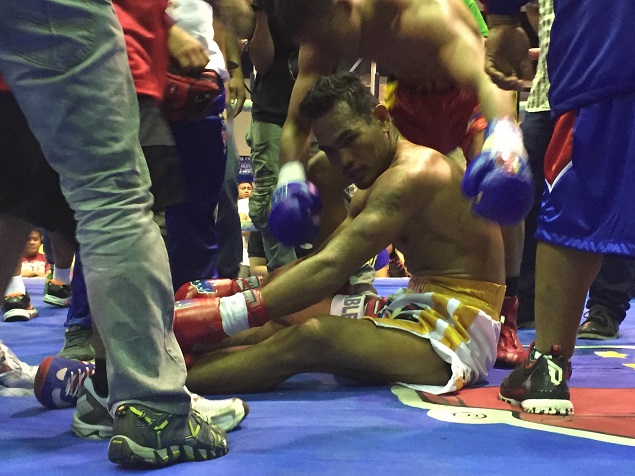 The fight wasn’t without controversy. As the southpaw Cabalquinto and orthodox Rivera came together early, their heads clashed. The butt created a cut on the top of Rivera’s head but Cabalquinto appeared stunned.

Before referee Virgilio Garcia could step in to assess the damage, Rivera landed a bomb of a right hand that left Cabalquinto unconscious on the canvas.

“Boxing is like that sometimes,” Garcia said as he left the ring.

Cabalquinto, who is rated No. 12 at 140 pounds by the WBO, remained on the canvas for several minutes as oxygen was administered to him. As he sat on his stool in the corner, he motioned to his head to protest the headbutt, to no avail.

In earlier action, lightweight Jay-Ar Inson (10-0, 7 KOs) of Davao City closed the show with one left cross, knocking down a game Bryan Macamay (9-4, 5 KOs) in the closing seconds of the 10th and final round to score a technical knockout at the 2:59 mark.

Macamay, who was down in the second round as well, rose to his feet but turned his back, unable to continue.

The 25-year-old Inson is a rangy but aggressive fighter, standing 5-foot-10 while boxing out of a southpaw stance.

The show was promoted by Manny Pacquiao’s MP Promotions.