From the pay-per-view card to the race card: Mayweather speaks 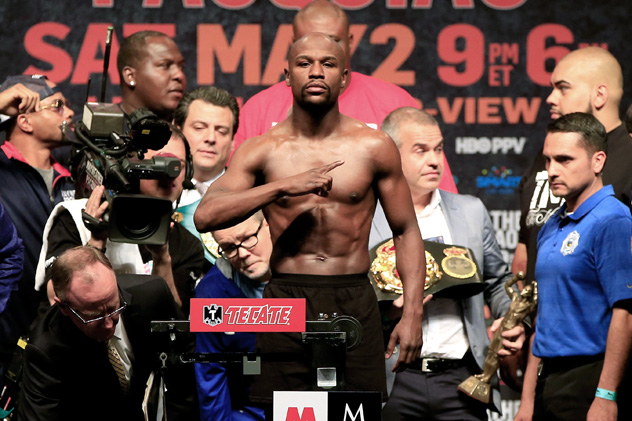 Floyd Mayweather Jr. may be retired but his mouth still works and he can still generate buzz, even when not an active fighter.

Exhibit A: Floyd spoke to FightHype.com and touched on a few subjects, including the man many fans believe is currently one of the best fighters in the world, IBF/WBA middleweight titleholder Gennady Golovkin.

Mayweather was asked about “GGG’s” place in the sport and if he thinks Golovkin could do Floyd-type pay-per-view numbers. “I took risks,” Mayweather responded. “I took chances. I’m just waiting to see if Triple G is going to go up and fight Andre Ward. I’m going to be convinced when he can go up and beat Andre Ward. Until then, I’m not convinced.”

Those not members of the Mayweather Fan Club will likely take issue with him perceiving himself as a risk taker…and would be perturbed by setting a win over Ward, now a light heavyweight, as definitive proof of GGG’s skills.

Then, Mayweather went there, to a zone guaranteed to get the press chattering.

“And I honestly feel it’s not a black thing; it’s not a white thing. It’s the right thing but, like I said before, racism still exists in boxing,” he said, leaving me to wonder what sort of contract he might have signed with Showtime if this “racism” had been eradicated. “They had Hispanics and black fighters only that was dominating the sport for years. An Asian fighter comes along and makes a lot of noise, which is Manny Pacquiao. For years, they said I was a coward; I was scared or I was ducking this guy. All I said is, ‘Random blood and urine testing and let’s make it happen.’ Eventually, we got to a certain point; we negotiated the fight. It happened; it is what it is. So what I’m saying is this: They were so adamant about that fight (Mayweather vs. Pacquiao), you know, but they’re not adamant about Triple G fighting Andre Ward? Whoever is forcing Andre Ward to go up to (light) heavyweight, that’s not cool at all. They’re trying to get him beat. From the looks of things, what’s going on in the sport of boxing, they want their superstar to be Caucasian. It’s obvious and this has been going on for a very long time. They wanted me to lose to Pacquiao but that didn’t happen.”

Lots of stuff to parse there…Now does Mayweather know Ward is being FORCED to go to 175? I haven’t heard that from Ward. I’d be curious to know if he feels the same. He doesn’t strike me as the sort of guy who can be forced to do anything.

That the powers that be would prefer a Caucasian to be the face of the sport, that’s up for debate. I think Mayweather was compensated mightily and I don’t see that he has a firm a leg to stand on with that argument, being that he signed the richest personal deal of all time, in any sport. And some would argue that more important than color is character, charisma…People took to his charisma, such as it is, and debated his character and found him to be enthralling to the point that he became a potent PPV draw. Let’s not forget, though, money wasn’t made as hand-over-fist for many of his fights with Showtime as it was for his one mega-bout against Pacquiao. So, at times, fans showed they were not hugely enthused with his act and, unless we poll them all, we can’t know what – if anything – that had to do with race.

Really, I’m curious to hear from you fans on the subject…I agree with Floyd in that racism exists in boxing. It exists everywhere, in pockets. Do I think, at times, the powers that be want the sport’s faces to maybe reflect their own cultural norms and behaviors because they are more comfortable with that dynamic? Sure thing…But this Floyd-decrying-racism thing, it is hard for me to wrap my brain around, what with all the clear, deliberate and disgraceful examples of repulsive racism, of values directed at “fringe” or “lower-tier” persons in our nation, making the rounds in the news, on videos taken by bystanders. So…I find myself provoked to think, by Floyd’s statements, and wanting to delve in deeper, with your help. Talk to me, readers…

Pay-per-view card, race card…who cares? I think we can all agree that Michael Woods is a card, period.