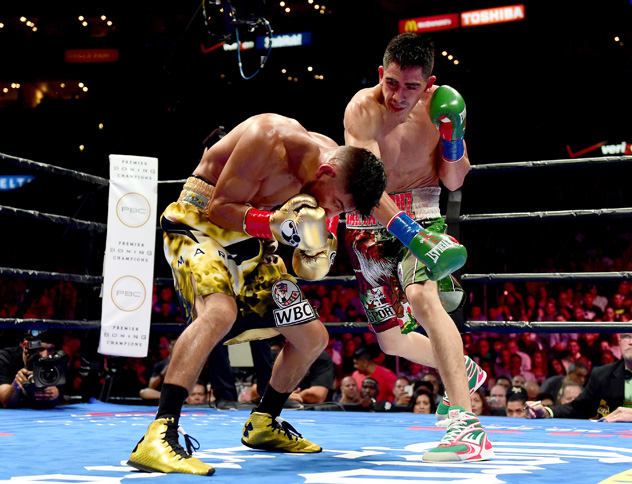 LOS ANGELES, CA – AUGUST 29: Leo Santa Cruz punches Abner Mares of Mexico during the sixth round of the WBC diamond featherweight and WBA featherweight championship bout at Staples Center on August 29, 2015 in Los Angeles, California. Santa Cruz would win in a 12 round decision. (Photo by Harry How/Getty Images)

Leo Santa Cruz has received a lot of criticism over the past couple of years. However, the 27-year-old three-division champion hopes his August win over crosstown rival Abner Mares goes some way to proving his critics wrong.

“Ever since that fight, everything has been going great,” Santa Cruz told RingTV.com last week in Kunming, China at the WBC convention. “Before, (the fans) used to put cherries on my Instagram and Twitter (signifying he was cherry-picking his opponents) and now they’re saying I’m really good. I showed a lot of people that I deserve to be up there. I shut their mouth.”

Santa Cruz moved his record to 31-0-1 (17 knockouts) with the majority decision over Mares.

“It was a great fight, what I expected,” said the California-based boxer-puncher. “We were both well-prepared do go give a war and that’s what we did. We gave the fans a great show. We’re willing to give the fans another great show, maybe a rematch in the future.”

A rematch with Mares had been mentioned and Santa Cruz is happy to face him again but doesn’t expect it to be next.

“I heard that I’m going to fight in January,” he said. “I think Mares is down the road, If it was him (next), they would have told me. I think it’s maybe a stay-busy fight, then a hard fight against a champion. I’ll probably wait for the winner of (Carl) Frampton-(Scott) Quigg.

At the 53rd annual WBC convention, Santa Cruz officially abdicated his 122-pound throne: “We’re vacating at 122; we feel better at 126. There’s great fights there and I think we’re gonna stay there for awhile.”

He has big plans further down the road.

“I’m still young. Those fights the fans want me to fight, I think there’s still time,” he explained. “I think I could fight each of them. If we win them, I can continue fighting the best because we want to be known as the best, pound-for-pound.