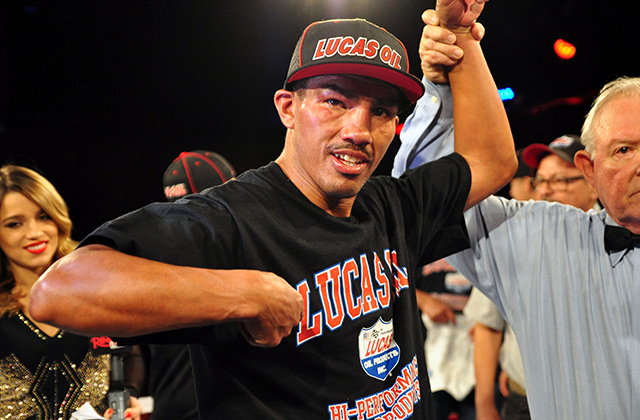 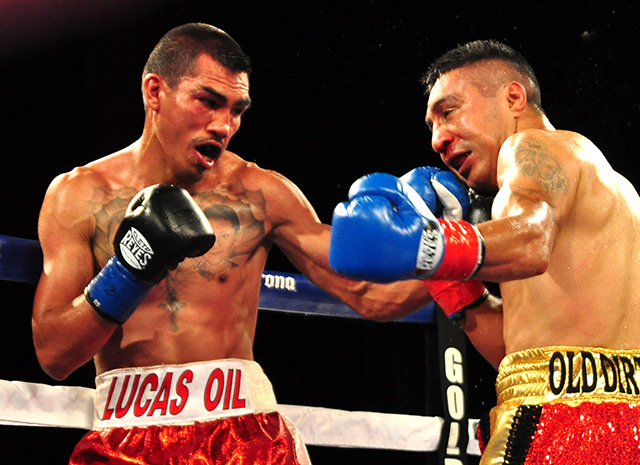 Martin Honorio connects with a left hook en route to a 10-round decision over fellow gatekeeper Miguel A. Huerta on Nov. 6, 2015, in Los Angeles. Photo by German Villasenor

In a battle of junior welterweight gatekeepers, Martin Honorio had enough left in the tank to avenge a defeat over 13 years ago. Honorio defeated Miguel Angel Huerta by unanimous decision over 10 rounds on Friday at the Belasco Theatre in Los Angeles, Calif.
With the win, Honorio improves to 33-9, 16 knockouts. Huerta falls to 28-14-1, 18 KOs.
While both fighters gave their best effort in the ring during their “LA Fight Club” headliner, their best days as fringe contenders are long behind them.
Before Honorio and Huerta fought world titleholders, contenders, and prospects, they squared off in April of 2002. Huerta did enough to win a 10-round unanimous decision.
Both fighters had their moments during the first half of the fight. As the bout progressed, Honorio began to assert himself in the middle of the ring, beating Huerta to the punch. Huerta’s punch output seemed to drop with each round, allowing Honorio to easily win rounds up until the final bell.
All three judges scored the bout in favor of Honorio by scores of 99-91, 98-92, and 97-93.
The win snaps a three-bout losing streak for Honorio. He had not fought since losing a one-sided 10-round decision to Antonio Orozco in May of last year.
Gonzalez too much for Rios 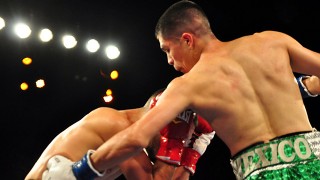 In a battle of unbeaten featherweights, Joet Gonzalez scored an impressive third round knockout over Marcos Rios.
Gonzalez improves to 12-0, 6 KOs, while Rios drops to 12-1-1, 8 KOs.
It was all Gonzalez from the opening bell, as he consistently beat Rios to the punch. He scored a knockdown about midway through the first round with a right hand to the chin of Rios.
Gonzalez continued working from the center of the ring, dictating the pace and keeping Rios, who was fighting for the first time in the United States, at the end of his punches.
Late in the third round, Gonzalez dropped Rios with a left hook to the body. Rios got up and tried to fight back, but Gonzalez landed a vicious left hook, dropping him again to the canvas. Referee Jerry Cantu waved the fight over at 2:50.
Gonzalez is promoted by Golden Boy Promotions and managed by Frank Espinoza.
Navarro KOs Henson
In the opening bout of the ‘Boxeo Estelar’ telecast on Estrella TV, welterweight Jonathan Navarro (3-0, 2 KOs) knocked out Shaun Henson (2-3, 2 KOs) in the fourth round.
Henson was dropped twice in the fourth round, courtesy of hard body shots by Navarro. Referee Zac Young saw enough and waved the fight over after the second knockdown at 2:20.
The next fight card at the Belasco Theatre in Los Angeles will take place on Dec. 4.
A replay of the entire Nov. 6 “LA Fight Club” show, including three non-televised undercard bouts, is currently available at RingTVLive.com.
Francisco A. Salazar has written for RingTV since October of 2013 and has covered boxing in Southern California and abroad since 2000. Francisco also covers boxing for the Ventura County (CA) Star newspaper, Boxingscene.com, and Knockout Nation. He can be reached by email at [email protected] or on Twitter at FSalazarBoxing