Looking back at George Foreman-Michael Moorer 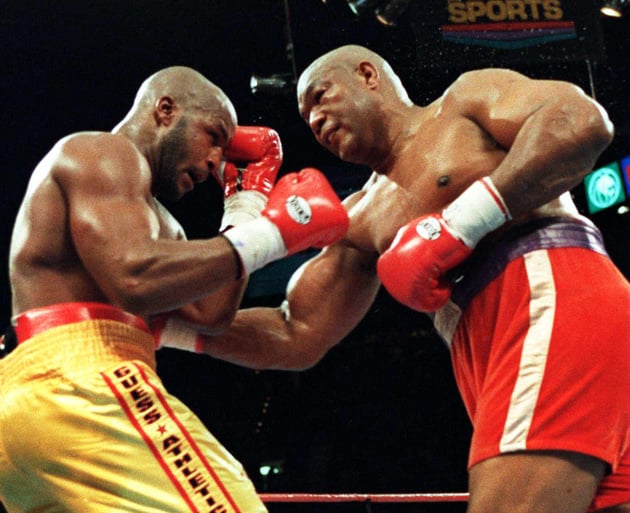 Not feeling spry today? Joints in organized rebellion against you? Investigation finding proof of new batch of gray hairs? Feeling like your best laid plans have been sidetracked by vagaries of fate and a subpar arsenal of tools at your disposal? Buck up, champ; it was 21 years ago today when a 45-year-old cheeseburger addict proved that experience can trump youth and reputation and, by extension, told all of us increasingly creakily-jointed sorts that we can bounce back from the hernias and the blows to ego and such, and continue to thrive, and enjoy periodic trips to the mountain’s peaks.

On this day in 1994, George Foreman stopped 27-year-old Michael Moorer, then 35-0 and holding the IBF and WBA heavyweight titles, and kicked Father Time in the groin. Young Moorer wrested those belts from Evander Holyfield nearly seven months prior.

Cheeseburgers, no, it was Moorer launches that Foreman, with aged sage Angelo Dundee in his corner, chewed on at the MGM Grand Garden Arena.

But he bided his time, looked to time something to perfection. And that he did…

In round 10, an obscuring jab, then a right hand had Moorer discombobulated. Down went the boxer seconded by Teddy Atlas, only the second man at the time to snag the light heavy and then heavyweight crown, and he didn’t beat the count.

Foreman recalled the evening to me. “Moorer was a dangerous puncher; he really believed in his power hand,” the Texas resident said. “I had to be careful not to lean or bow into his power.”

And going in, did you KNOW you would win? Or did you think maybe Moorer was too young, too sharp? “Being careful cost me an early KO,” said Foreman, who, by the way, was wearing the same trunks he wore when he met Muhammad Ali in Zaire. “I stood tall to avoid any hard shots and, by the 10th round, I knew I had the punches I could knock him out with. But not before the ninth or 10th round.”

In round one, Foreman’s left eye had already started swelling but he wasn’t going to get into worry mode. He’s been to many a rodeo, broke more stubborn steer than Moorer. So stubborn, though…

Foreman ate clean shots, intermittently, and a right uppercut blasted the big fella in round eight and rattled his brain pan, to close the round. But not his composure, his focus, stuff that can improve with the onset of those pesky grays…

And in round eight, round nine, observers noted George was slowing down. Stamina woes, inevitable, was the thinking. But while his volume waned, his plan didn’t deviate…

That understanding came from going through trials, knowing the world would keep turning. It came with age, with experience.

“Our sparring partners were better,” Atlas told Moorer after round one. Oh maybe so…but they weren’t as crafty, weren’t as seasoned.

Round 10, soon after color man Gil Clancy called him “a 45-year-old man in a young man’s game,” a one-two – short, sweet, brutal – was delivered. Possessor of wisdom and a destructive right hand… 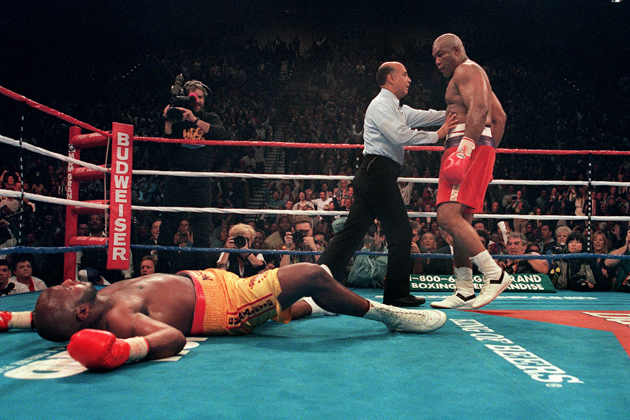 Referee Joe Cortez counted; Moorer couldn’t collect his senses, couldn’t roll from his back to his feet. One minute 17 seconds remaining in the 10th, the point of the chin shattered, the old man sent a message that Botox and hair dye and the like couldn’t match.

Foreman could stay chill while dealing with incoming fire, keep breathing instead of expending energy by worrying…his brain was better and helped propel his body to a place where he became the oldest man to win a world heavyweight title.

A young man’s game, usually, but not always. Twenty-one years ago, George Foreman reminded us of that.

Thanks, champ, for putting those new batch of grays in perspective.

Sure, the heavyweight title bout between George Foreman and Michael Moorer may now be legally old enough to drink but that hasn’t stopped Michael Woods from kicking Father Timer in the groin. Shaved head, no grays. Backwards ball cap, no problem.