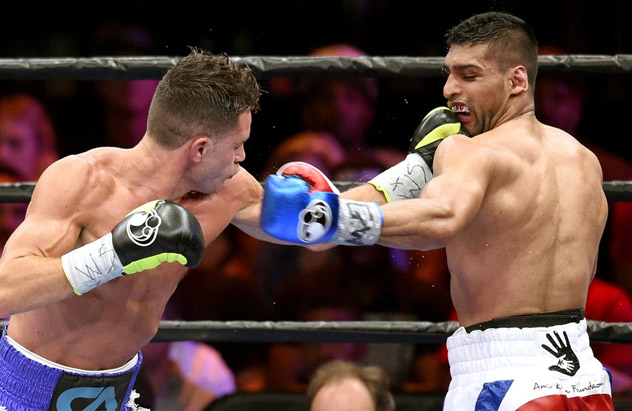 NYC-area boxing fans are looking forward to the Dec. 5 headliner clash between Peter Quillin and Danny Jacobs at Barclays Center on a Premier Boxing Champions/Lou DiBella card with a strong measure of interest.

That matchup of explosive, middleweight young guns figures to see a knockdown or two and one man’s stock getting a nice bump…with the other man tasked with some taking-stock time on where he stands in the sport.

The undercard is also shaping up nicely; one tangle which has some decent buzz attached to it is the welterweight showdown featuring Chris Algieri (20-2, 8 knockouts), the Long Islander who impressed mightily in a win over Ruslan Provodnikov in that same building, and also sustained a narrow loss to Brit ace Amir Khan in the same barn. He meets an under-the-radar but not untalented type in Erick Bone (age 26, 16-2 with 8 KOs, born in Ecuador); Bone popped up on screens when he gave Shawn Porter good work as a late fill-in for his last outing in March. On that day, he hurt a knee, fought on and was stopped in round five.

I touched base with Eli Mackay, who manages the Ecuadorean. How, sir, does Bone figure to beat Algieri?

“With ease,” Mackay told me, with a chuckle. “No, we don’t want to be judged on the Shawn Porter fight alone. Let Erick tell you.”

Bone weighed in, “I know it’s the only time the fans have seen me fight but they don’t realize I fought hurt from the second round on. I had to wear a cast for two months after that. Don’t judge me on that fight alone because Dec. 5th, I’m coming in 100 percent! Judge me on THAT fight!”

He explains that, as a late fill-in, he had to scramble to Cali to fight the muscle-y Ohioan Porter. “On a day’s notice, I went from NY to LA,” Bone told me, “to fight at a weight I never fought at before (he came in officially at 149 pounds). I believe I would have beat Porter if I had at least a week’s notice and didn’t get injured. I’m training very hard for this fight and I know Algieri is too – and I expect him to. But I believe I can get this done and show the fans great boxing!”

Algieri is promoted by Star Boxing; its matchmaker, Ron Katz, has 40 years in the business and knows what he sees in a ring. How does he see Algieri-Bone? “I love the match for Algieri,” Katz told me. “He’s too big, too fast. Bone is a tough kid who will try but is very one-dimensional. Being with trainer John David Jackson for the second time will have a great effect on Algieri. I wouldn’t be surprised if he stops (Bone) late.”

Readers, talk to me; if Algieri wins, what is his route from there? Does he get a title crack? Could Bone be a spoiler in Brooklyn?

Michael Woods pops up on screens occasionally too – offering blow-by-blow boxing analysis and invading Twitter timelines. And unlike a subtle “Bone popped up” undertone, Woodsy is safe for work viewing.