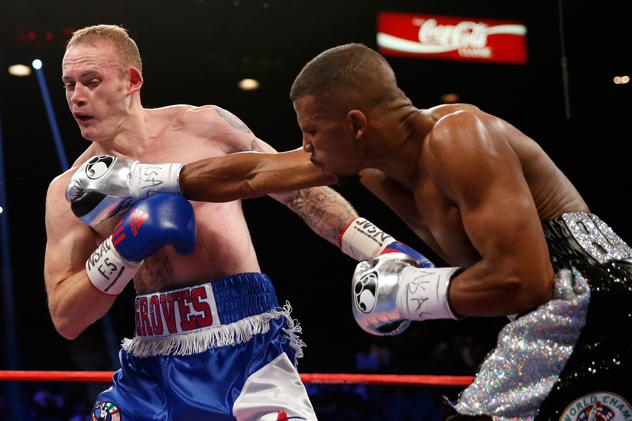 Badou Jack successfully retained his WBC super middleweight title for first time when he turned back mandatory challenger George Groves in Las Vegas in mid-September on the pay-per-view undercard of Floyd Mayweather Jr.’s fight versus Andre Berto.
Jack, who recently turned 32, was pleased with how everything went.
“It was a pretty good fight,” Jack told RingTV.com at the WBC convention in Kunming, China. “I knew (Groves) has a lot of experience of big fights, so I knew he was good. At this level, no fight is easy. He’s definitely a very good fighter. He came to win, he did what he could but it wasn’t enough.”
The Swedish-born fighter, who now lives in Las Vegas and fights out of the Mayweather Boxing Club, made an early statement in the fight, dropping the British fighter in the opening round.
“I didn’t look for it,” he said. “I set it up with the jab and I dropped him. I should have went to the body more. There’s a lot of things to work on. I should have stopped him, I think.”

Ultimately he had to settle for a split-decision win and moved his record to 20-1-1 (12 knockouts).

Afterward, Jack spoke with Mayweather about the fight, “He asked me, ‘Is that white guy really that tough?'” I said, ‘Yeah he is.”‘ (Laughs.)

Having taken care of his mandatory, Jack can look forward to a possible lucrative voluntary defense in early 2016.

“We’ll see who’s next. It could be (Julio Cesar) Chavez Jr. I don’t know yet. He’s got a good name from his father. He’s a former world champ too and there’s money in that fight, so absolutely. For me, I would like to fight him next.

“I would like to fight James DeGale. I like the (British) fans,” he explained. “He’s fighting (Lucian) Bute now (on Nov. 28). Maybe I’ll fight Chavez and, in the summertime, I can fight DeGale in a unification bout.”

He also has aspirations of one day joining his trainer, Eddie Mustafa Muhammad, as a light heavyweight champion.

For now, though, he’s enjoying some downtime and is attending the 53rd WBC annual convention.

“It’s my second time, I was here and fought in the Olympics in 2008,” Jack said when asked what it was like to be back in China. “I love it out here. It’s good to see a new city, Kunming. I’ve never been here before.”