Frampton-Quigg signed and sealed for Feb. 27 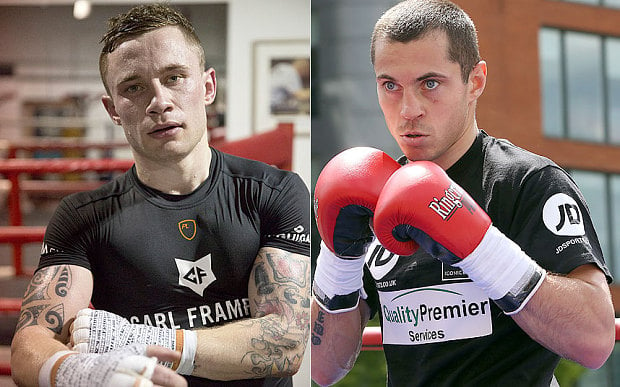 Undefeated British junior featherweights Carl Frampton and Scott Quigg will meet in an eagerly-anticipated showdown at the Manchester Arena in England, on Feb. 27.

Quigg, 27, from Manchester, and Belfast star Frampton, 28, were flanked by their respective representatives Eddie Hearn and Barry McGuigan, as details of next year’s clash were announced.

And both fighters revealed a mixture of relief and excitement at the prospect of getting into the ring to resolve their long-standing dispute over who is the best 122-pounder in the UK.

“I’m delighted that we have finally got this fight signed,” said Frampton, THE RING No. 2-ranked junior featherweight. “This is the fight everyone has wanted for years – and none more so than myself.

“I always said I’d fight Scott wherever he wanted – in Bury, Manchester, wherever. I respect him and I’m not going to badmouth him but I’m the legitimate champion and I’m going to his backyard to defend my title because that’s what champions do.

“On Feb. 27 the fans will find out who the real champion is. I’m going to win this fight in style.”

Quigg, who, in July, stopped Spaniard Kiko Martinez inside two rounds, is equally bullish that he will emerge victorious.

“”I’ve finally got the fight I’ve wanted for so long,” said the magazine’s No. 1 junior featherweight. “February 27 will be the best night of my life. I’ve dedicated my life to this sport and I have never been more confident going into a fight. I intend to knock his head off. I know I will beat him in every department.

“I’ve nothing bad to say about Carl. We’re not friends but I don’t dislike him. The main thing is this is a great fight for the sport and I’m delighted to be bringing it to Manchester.”

Finding an agreeable venue had been the final issue holding up the fight. While Manchester is very much Quigg’s home patch, tickets for the scrap will be split evenly between supporters.

“There will be 10,000 tickets for the Irish and 10,000 for the English,” said Matchroom Boxing chief Hearn. “[Carl] Froch-[George] Groves captivated people in this country. This fight captivates people all over the world. It is a fight for domestic supremacy but one between two elite boxers at their peak who are among the very best in the world.”

Those sentiments were echoed by head of Cyclone Promotions, McGuigan, whose son Shane trains Frampton.

“This is the most eagerly-anticipated British and Irish title fight out there,” said the former featherweight beltholder. “I am thrilled that we have finally got it done. I’m very excited and, like Carl, I can’t wait for the build-up.”