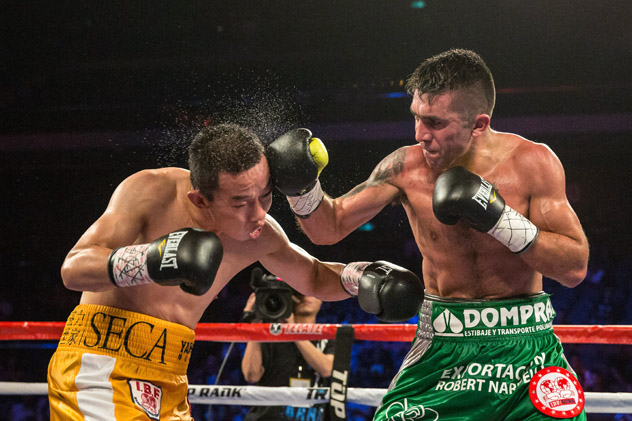 Several recurring subjects can surface in a boxing interview depending on the interviewee.

In the case of Cesar Cuenca (48-0, 2 knockouts), it is the one trait in his boxing genome that has brought him to the attention of fans worldwide – his lack of knockout power. This again becomes the main topic of conversation with the Argentine non-puncher and IBF junior welterweight titlist as he heads to Russia to defend for the first time against Eduard Troyanovsky on Nov. 4.

According to Cuenca, however, we may have to look for new topics the future.

“I didn’t trust my power before,” said the 34-year old Cuenca, who in spite of his notorious lack of pop did manage to send Chinese contender Ik Yang to the canvas in his title-winning effort back in July. “I used to box and move because I felt comfortable and that was my game. I believe I’m reaffirming my style and gaining confidence in my power. From now on, I believe I will start doing some damage.”

Largely unknown after a 12-year career developed exclusively in Argentina, Cuenca had a justified fear of fighting abroad and having his non-stop, two-fisted style going unappreciated by fans and judges alike. But after the Yang fight, the unbeaten Argentinian is convinced that his skills are finally earning him the respect he craves.

“I think so,” said Cuenca, when asked whether people’s perception of his solid boxing fundamentals are clouded by his lack of concussive power. “And more so with the people in the States, because they look for the knockout all the time. But I got calls from people that I never expected to hear from, and they said ‘I didn’t like your boxing style too much because I like knockout artists more, but I have to congratulate you.’ People will have to look at my boxing skills in a different light.”

In sharp contrast, the undefeated Eduard Troyanovsky (22-0, 19 knockouts) turns his punches over very well, but Cuenca fails to acknowledge power as a virtue unto itself and places emphasis on his opponent’s weaknesses.

He said, “Troyanovsky is strong, as you can see by his record. I haven’t followed his career, but my coach Mario Tedesco told me he’s slower than Yang.

“I believe bigger fighters such as (Juan Manuel) Marquez, who I was close to fighting in Mexico once, feel I’m not the right opponent for them because, in their mind, if they don’t knock me out or win convincingly they would feel ashamed. That’s what happened with (Argentine KO artist and former opponent Claudio) Olmedo, but my punching power is no longer relevant. I have the title and they have to come and take it. I’ll fight whoever they put in front of me.”

Some people might think there is less risk in facing a non-puncher like Cuenca, but the fighter believes that the opposite is true, and that the real pressure is on his opponent.

“That’s what happened with Yang,” said Cuenca. “He said in a press conference that he was going to knock me out in six, and when the sixth round passed he fell into despair. It’s tough for them because, unless they knock me out, I can do 12 rounds easily and I’ll be throwing a ton of punches in every round.”

Cuenca’s world title and immaculate record has earned him a place in the big fight conversation. In the past he was rejected by the aforementioned Juan Manuel Marquez, whom he claims to have called daily in order to set up a fight, and then the WBO inexplicably stripped him of his mandatory contender status (a move that Cuenca links to a personal whim with organization president, Francisco Valcarcel). Through it all, he persevered and maintains that critics are warming to him.

“I believe it will improve,” said Cuenca about the growing support both within his country and abroad. “Regardless of the criticism I always maintained this style, and I kept it until I won the world title. I never rushed to get the knockout and with this style I became a world champion.”

Still, the number of hearts and minds to be won over is immense although the 34-year-old likes his chances.

“They changed their minds after my title fight,” said Cuenca, when asked about the likelihood of people changing the way they look at his unique style. “Those who know about boxing didn’t have to change their minds about me. Boxing is hitting and not getting hit. I believe I have an exquisite boxing style, and not being a knockout artist shouldn’t be held against me.”

The sacrifices made as a child when he lived in abject poverty; picking cotton and cutting down trees for charcoal in his native town of Tres Isletas, in the province of Chaco, seemed to have hardened Cuenca. He is therefore unfazed at the prospect of building a fan base for a fighter who is well on his way to having the lowest knockout percentage of any world titleholder in history.

“It gives all of this an extra flavor,” said Cuenca about his uber-rough upbringing. “I always told God that I would wait for the moment where he decided to give me my due, and I believe this is that moment. I’m 34 years old and although I wish this happened three years ago, it’s better now because I have a different mindset. I’m grateful for everything that God has put in my path.”

A path that one day, he hopes, will cross with some of the bigger names in an elite division.

“I have to continue training hard, perhaps harder now that I have the title,” said Cuenca, about his chances of securing a lucrative bout against a recognizable fighter. “I have a lot of hunger for glory and maybe one day I’ll get it if I fight one of them.”