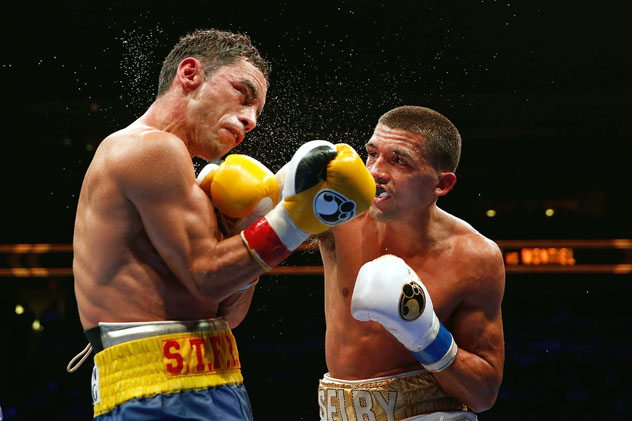 Selby (22-1, 8 knockouts) has mixed feelings about his performance.

“After the fight I was disappointed in my performance but then I watched it back on TV and it was a good fight against a good opponent,” Selby told RingTV.com. “I thought it was a decent performance against a very good experienced fighter.

“It was the biggest learning fight I’ve had, against a very experienced fighter; he’d had 22 world title fights; that was only my 23rd fight so it was a good learning fight. He showed he still had a lot in the tank at the age of 36, which a lot of people thought he didn’t. It was a good fight.”

The 28-year-old Welshman is well accustomed to being in America; he has had several training camps in Las Vegas as well as Los Angeles.

His fights, however, have mostly been in front of friendly faces, unlike the pro-Montiel crowd in Phoenix.

“I’m used to fighting in front of a home crowd. It’s really noisy. The U.K. fans are really noisy on the ring entrance,” he said. “In America, it was quite quiet for me. Obviously Montiel had a lot of fans being in Phoenix, I was the away fighter. They booed me when they announced my name, they booed me when I won and I walked out of the arena after the fight and they booed me.”

Selby didn’t let the crowd affect him in banking early rounds before Montiel made an impression in the middle rounds, cutting the champion with a head clash. Selby boxed well in the late rounds to take a unanimous decision: 119-109, 118-110 and 116-112.

For now his focus is on his younger brother Andrew – a former amateur standout who twice won the European Championships and medaled at the 2011 (Silver) and 2013 (Bronze) World Championships – who makes his pro debut on Friday.

“I’m looking forward to it as much as if I was fighting and I’m as nervous,” he admitted. “There’s a lot of pressure on him. It’s made at 117, he’s on weight now. But he’s gonna do flyweight; he’s a nice size for the weight.”

As for his own plans, it appears as though he’ll make a mandatory defense in the first quarter of 2016.

“Early next year. The IBF have ordered a final eliminator between Victor Barros and Eric Hunter,” said Selby, who is rated No. 5 at featherweight by THE RING. “They’re fighting towards the end of next month. So I’d imagine I’d have the winner of them in my mandatory.

“It would be nice if it was back over here but it’s up to Al Haymon wherever they put the show. They’re bound to win the purse bid.”

In the long-term he’d like to face the biggest names available.

“I’m not aiming for no one but I want high-profile, big fights,” he said. “You’ve got (Leo) Santa Cruz, he’s one of the highest profile fighters in America at my weight. I’ve heard him mention me on social media and in interviews that he’d like to fight me, so that’s a fight I’d like. Get through this mandatory OK and maybe straight in with him or another fight first.”