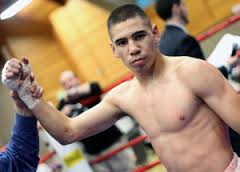 Manuel Avila has been a professional boxer since November 2011 but the junior featherweight standout from Fairfield, California wasn’t a fulltime pugilist until two months ago.

That’s because even before his pro debut, Avila – “Tino” to friends and teammates – held a job (or two or three).

“I’ve always worked, always held a job as a pro,” the 23-year-old boxer told RingTV.com. “I used to work the night shift at 24-Hour Fitness, training people in boxing, I was a part-time union rep for the grounds keepers for cemeteries and golf courses in the Sacramento area – that’s a job I had even before turned pro – and I worked fulltime for the Coca Cola company, setting up merchandise displays and restocking shelves in stores.”

Somehow, Avila found a way to train for his fights. And burning the candle at both ends didn’t keep him from winning 18 consecutive bouts, eight by stoppage. In his last fight, in August, Avila beat highly touted former amateur standout Yoandris Salinas to earn a regional 122-pound title (the interim NABF belt).

Salinas, who entered the HBO Latino-televised bout with a 21-1-2 record, was the odds favorite. The 30-year-old Cuban was only two bouts removed from holding top contender Scott Quigg to a draw in a WBA title bout in the UK. In the eyes of many boxing wise guys, Avila was in over his head but the Northern Californian dropped Salinas en route to a sixth-round stoppage when the more mature boxer retired on his stool.

“It felt great to get that win because it put my name out there a little bit,” said Avila, who takes on veteran Mexican journeyman Angel Beranza in the main event of a non-televised card at Cache Creek Casino Resort in Brooks, California tonight.

“It’s harder for me to get attention being a Northern California fighter. The promoters, most of the media and all the big-name gyms and coaches are in Southern California.”

With his newfound contender status – he’s now THE RING’s No. 10-rated junior featherweight – Avila felt it was time to commit fully to boxing. He quit his jobs and made a change in his management – signing with Kathy Garcia after the Salinas fight.

Garcia, who is based in Salinas, California, has a unique management set up. Her fighters live with her and her husband Max, who trains them at their home gym. When the Garcias’ fighters are in camp, they are like family and they live under the Garcias’ house rules. The Mom-n-Pop approach doesn’t work some fighters, but Avila, whose former manager, Cameron Dunkin, had a large stable of fighters, was looking for more individual attention and has taken to their system.

“The Garcias focus on one fighter at a time,” he said. “It’s a different experience for me, especially in training. There’s more focus on my conditioning and strengthening my body. I like it even though I got home sick at first.

“I live and train with the Garcias Monday through Friday and then I go home to Fairfield, which is about a two and half hour drive from Salinas, on the weekends.”

Garcia says Avila is a good fit for her style of management, which guided local fighters Jose Celaya and Eloy Perez to world rankings during their 15 years in the business.

“Tino was asking friends who they thought could help advance him to a world title, and we were mentioned,” Garcia said. “We’ve watched Tino on Don Chargin-promoted cards that included our fighters and we always gave him lots of encouragement, so we met, we talked and we signed.

“He’s from a supportive family and we’re a family organization. All we ask of our fighters is that they work hard and commit 100 percent to our sport.”

How far can Avila go in boxing if he commits 100 percent? Chargin, a hall-of-fame matchmaker who has developed several world champions during his 68-year career, believes Avila can go all the way.

“Avila has what it takes, in terms of talent and character, to win a world title now that he’s with the Garcia family, who will give him 100 percent of their time, skills and talent,” said Chargin, the promoter of tonight’s show in Brooks, California. “I really believe that he can advance from his North American title to a world title.”