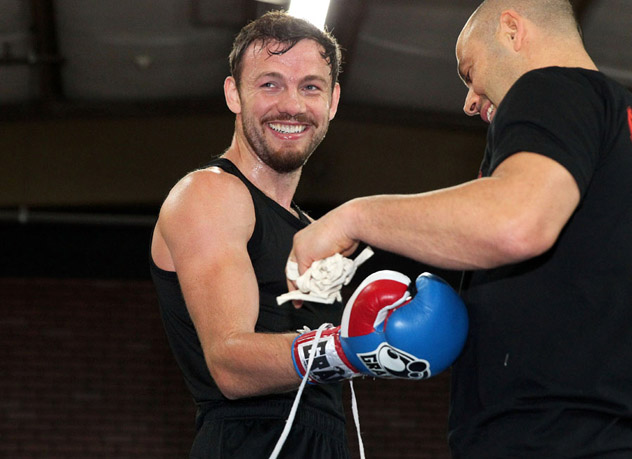 WBO middleweight titleholder Andy Lee has denied that he is overlooking his forthcoming opponent, Billy Joe Saunders, with a view to facing IBF and WBA champion Gennady Golovkin in a unification bout.

Lee, rated No. 2 by THE RING at 160 pounds, met face-to-face with Saunders at a press conference in Manchester, England, on Thursday, as the clock winds down to their Dec. 19 bout, and vigorously denied rumors that a deal had already been struck.

He said, “It would be stupid of me or Adam Booth to look past Saunders as he’s a dangerous fighter. There’s no way I’d be overlooking him. Golovkin is the golden carrot for everyone in the division, but I have to deal with Saunders first.

Saunders, rated No. 4 by THE RING at middleweight, insists that he is also 100 percent focused on the job at hand.

“I hope Lee is concentrating on this fight because I’m going all out to take his title,” said the 26-year-old Englishman. “Golovkin is the main man in the division right now but, when I win the WBO title, he’ll be calling me out to unify the belts.”

Saunders also ridiculed recent comments from Chris Eubank Sr. who said his son would destroy Golovkin, and reminded those in attendance that he had already beaten his rival.

He said, “I’m not going to shoot my mouth off like they do. Self-confidence is good but that is just plain stupidity. Eubank Sr. reckoned his son would beat me, but I handed Junior back to him beaten and broken.

“Andy Lee versus me is a real fight; this is the real thing. I guarantee someone will be going down but, one’s things for sure, I’m coming away with the belt.”

*Tickets are subject to a booking fee