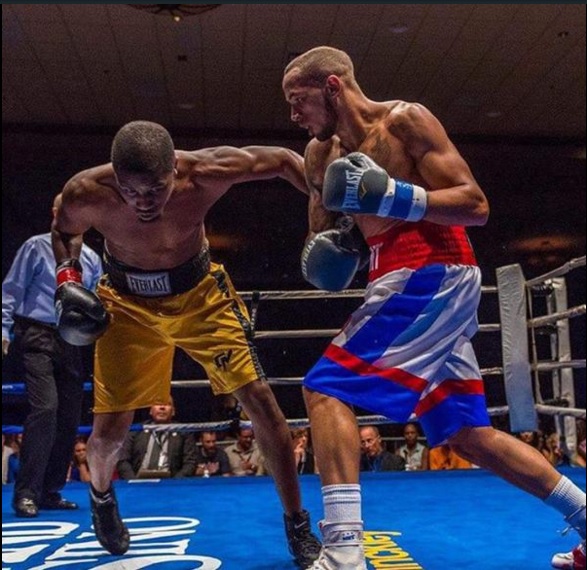 Best night of pro career: Brant feels he has grown exponentially as a fighter since he started working with Derrick James 18 months ago. He considers his third fight with James to be his best performance so far.

“I think my most notable opponent is Marcus Upshaw,” Brant told RingTV.com. “Which, of course, whenever you get in there with a higher level opponent, they bring out the best of you. I’d say, in a lot ways, against Marcus Upshaw was probably the fight I got to show the most, it was over eight rounds. That’s the most I’ve been able to showcase. I actually feel I’ve made major improvements every fight.”

Worst night of pro career: The recently turned 25-year-old prospect has had two nights in which, although he’s gotten the all-important W, he was disappointed with his performance.

“I had a fight with a gentleman [Keith Collins] with a horrendous record of 4-20 and although I won every round on the cards, it was a very pitiful performance, in my eyes. He didn’t want to engage and I couldn’t find a way around it.

“At that point, I started taking things a lot more seriously and realizing professional and amateur boxing are close to different sports. There’s different progressions that have to happen when you make that transition.”

Then in July, he fought Mexican journeyman Ernesto Berrospe in Bethlehem, Penn. when Brant hit the canvas.

“I say it was a slip but I wouldn’t have hit the canvas had it not been for a punch,” he explained. “I got careless; the guy was real easy to hit and I started forgetting my defense and I got tapped. I stood back up and made it at 9-9 round because I dominated the rest of the round. It was kind of a wake-up experience. It made me dial in and focus.”

Next fight: Brant, who headlines this week’s episode of “ShoBox” versus Louis Rose (13-2-1, 5 KOs), knows this is a step-up fight for him.

“He’s had a couple of losses but I really wouldn’t consider this being an ‘A’-side/’B’-side type of fight,” he said. “His quality of opposition has been really great. He’s a phenomenal outside boxer; he can move on the outside when he realizes he’s losing and exchange. When he’s in close, he will throw hard hooks to the body; he’s determined.”

Rose, 26, has been matched tough since making his debut in 2011. He has five wins over unbeaten opponents and, other than a first-round knockout against heavily-touted Ukrainian Ievgen Khytrov, is considered durable.

Why he’s a prospect: Brant had his first fight when he was 16 at a local show. He won the Ringside Championship in his fourth bout and enjoyed continued success, winning the Under 19 National Championship. He won the US Nationals in 2009 and silver in ’10. The highlight of his time in the unpaid ranks came in Little Rock, Ark. in 2010 when he won National Golden Gloves tournament as a light heavyweight.

He fought all over the world for America though admits he didn’t have much success internationally. He represented his country in Milan at the 2009 World Championships, in which he lost in the second round against eventual bronze medalist Jos├® Larduet of Cuba.

“I’ve had great opportunities to compete around the world,” he said. “Boxing has really given me opportunities I wouldn’t have had otherwise.”

Brant has several skills including a good defense and believes he’s developing into a boxer-puncher. However, he feels his boxing skills are his biggest strength: “My ability to adapt and be on the outside. My outside boxing ability is probably my best attribute.”

Minnesota is famed for hockey and wrestling, not boxing. However, Brant has fought at a local casino on eight occasions with success, suggesting, further down the road, he could be something of a popular local ticket seller.

“I’ve fought at the Grand Casino, Hinckley [capacity just under 3,000],” he explained. “All but one time we’ve sold out the venue. It’s not all on my shoulders but I am one of the bigger draws.”

Why he’s a suspect: Brant has been a pro for over three years but has yet to face a challenge.

“I think that’s yet to be seen,” he said when asked what areas he feels he needs to improve on to become a top fighter. “Some of the quality of opposition has been decent but I think I’ll really have a great answer for that when I hop in there with a guy like Louis Rose or these better competitors in the ring to bring some of those flaws out.

“In the last year-and-a-half, I’ve been fortunate enough to get guys out of there relatively quickly; right now, I’d say rounds and experience are probably my biggest downfall.”

He has yet to face an opponent who entered the fight with the belief that he was going to beat Brant. Although he was a top amateur in America, he wasn’t able to prove that at the world level, on which he enjoyed moderate success. Can he compete at the elite level?

Story lines: He was brought up by his father, who was a collegiate football player for UCLA. From a young age, Brant played as a running back and was friendly with a member of the team whose father was an ex-boxer.

“We used to go to his house,” he said, recalling his early boxing memories. “He had these 20-ounce gloves and we’d all put them on and have at it. His father said, “You’re pretty good at this.'”

When Brant was 16, he went to a local gym and worked with an elderly gentleman called Emmett Yanez. The two clicked; Yanez taught him the fundamentals and Brant moved his attention from football to boxing.

Brant, like Andre Ward before him, competed at 178-pounds in the amateur ranks but dropped down in weight. The Minnesota-born fighter made the sizable move, migrating south to 160 when he turned pro in the summer of 2012.

“I was always a really small ’78 and didn’t believe in cutting weight every day,” he said. “I fought where I felt comfortable and got the experience. Not coming from a boxing family or being in a weight-sensitive sport, I didn’t know how [to make weight].

“I competed, a lot of times weighing 172, 173, being a lot lighter. Then I realized, in the pros, [the opponents] seemed to get bigger and the gloves seemed to get smaller, so I thought this is a good opportunity to take nutrition seriously. I decided to make the move to 160. At first, it was a little bit tougher to maintain.”

His goals in the pro game are simple: “I want to become a world champion and defend my title in Minnesota.”

“I’m a huge Leonard fan,” he said. “I really enjoy watching Sugar Ray Leonard, not just for the things he did inside the ring but the way he carries himself outside the ring.”

Away from boxing, he works at a gym, Minnesota Top Team, where he teaches a kids boxing program. Before boxing, he contemplated going to University to study Elementary Education. He has two large dogs and enjoys spending time with them when he’s at home.