Roman Gonzalez demonstrated why he is king 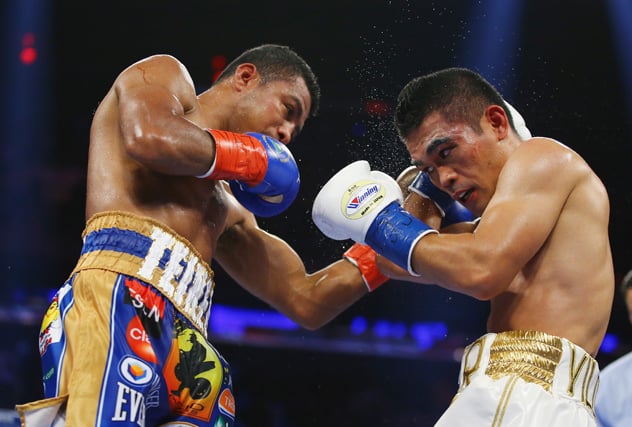 NEW YORK – Brian Viloria was well prepared to fight on Saturday night at Madison Square Garden. He was just in with the wrong guy.

Roman Gonazlez is a perfect storm, a skillful, fast, powerful little fighter with a menacing killer instinct. Viloria joined a growing list of capable, but overmatched opponents who learned those facts the hard way.

Viloria was courageous, perhaps too much so. He went down only once and survived eight-plus rounds but he took so much punishment that he couldn’t reach the final bell on the Gennady Golovkin-David Lemieux card.

Referee Benjy Esteves made the right – and merciful – decision when he jumped between the fighters to save Viloria from taking any more damaging blows from the No. 1 fighter in the world seven seconds before the end of Round 9.

Gonzalez retained his RING and WBC flyweight titles. It was also his 10th consecutive knockout. One gets the feeling there are many more to come.

“Brian is a great champion but tonight I was the better man,” said Gonzalez, who speaks much louder with his fists than he does with his mouth.

Viloria (36-5, 22 knockouts) fought with great spirit from the opening bell, when he burst out of his corner and attacked Gonzalez (44-0, 38 KOs) with purpose and confidence.

The first two rounds were close. In fact, Viloria won both of them on two cards and split them on the third. Then, in the third round, Gonzalez landed a short right that sent Viloria to one knee for the fight’s only knockdown.

That was the beginning of the end, as Gonzalez’s killer instinct kicked in. Viloria somehow survived that round and five-plus more – and, courageously, never gave up – but he took too many hard punches for Esteves to allow the fight to continue.

It was if he was fighting a flawless boxer. There was only so much Viloria could do.

Consider the CompuBox punch stats: Gonzalez outlanded Viloria 335-186 overall and connected on a remarkable 55 percent of his power punches (315 of 571), a testament to the Nicaraguan’s punching accuracy.

It was a wonder Viloria lasted as long as he did.

“Roman is a tremendous fighter,” said Viloria, a four-time world titleholder who at 34 is nearing the end. “I have nothing but respect for him. I had prepared for a different Roman and he surprised me with his defense and his speed.

“I do feel like the fight was stopped prematurely, I feel good and can keep going. If I had an opportunity to take him on again I would. I feel like I learned a lot today and would use that for the next time around.”

There probably won’t be a next time. Gonzalez will take some time off and then, with his team, he’ll select another tough, experienced opponent in an effort to build on his growing reputation as a terror.

And no one familiar with him will be remotely surprised if he emerges 45-0.