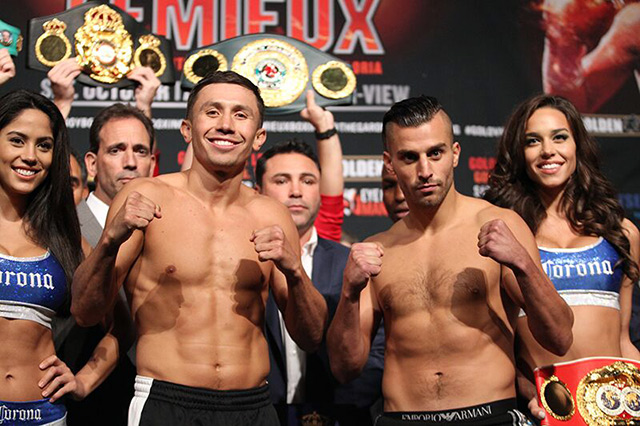 NEW YORK CITY – One fighter comfortably made weight on Friday afternoon. The other had to strip down just to reassure there will be a middleweight unification bout.
Undefeated WBA titleholder Gennady Golovkin weighed in at 159.4 at Friday’s weigh-in, which took place at The Theater inside Madison Square Garden.
There were some rumors going on within the last couple of days leading up to the weigh-in whether David Lemieux, who will be defending the IBF middleweight title, would make weight. As Lemieux got on stage, he undressed completely, save for the towel a couple of handlers held up while Lemieux got on the scale.
To the relief of those involved with the promotion, Lemieux weighed in at 159.8 pounds.
Roman Gonzalez and Brian Viloria both weighed in at 111.4 pounds for their RING magazine and WBC flyweight title showdown.
Both fighters were loudly cheered by a rooting section as each stepped on the scale.
Two more fights round out the HBO Pay Per View telecast, which begins airing at 9 p.m. ET/ 6 p.m. PT. Unbeaten heavyweight Luis Ortiz weighed in at 237.8 pounds, while once-beaten Matias Ariel Vidondo tipped the scale at 261 pounds.
Middleweight contender Tureano Johnson weighed in at 159.4 pounds, while Eamonn O’Kane weighed in at 160 pounds. It is an elimination bout between Johnson and O’Kane for the IBF number one position.
Non-televised undercard action:
– Maurice Hooker (139.4) and Ghislain Maduma (139.2) each comfortably made weight for their 10 round junior welterweight bout.
– Unbeaten Lamont Roach weighed 131.4 pounds, while Jose Bustos tipped the scale at 130.4 pounds for their six round bout.
– Unbeaten Ruslan Madiyev (139.6) faces late-sub Sean Gee (142.6) in a four round bout.

Below is the final bout sheet (with weigh-in results) for the stacked card presented by K2 and Golden Boy Promotions in association with Eye of The Tiger Management and Teiken: 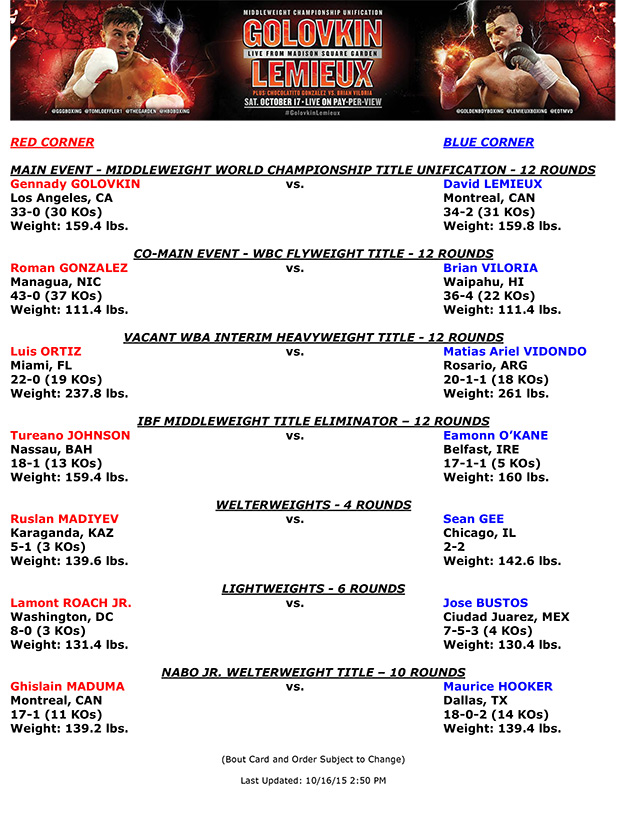