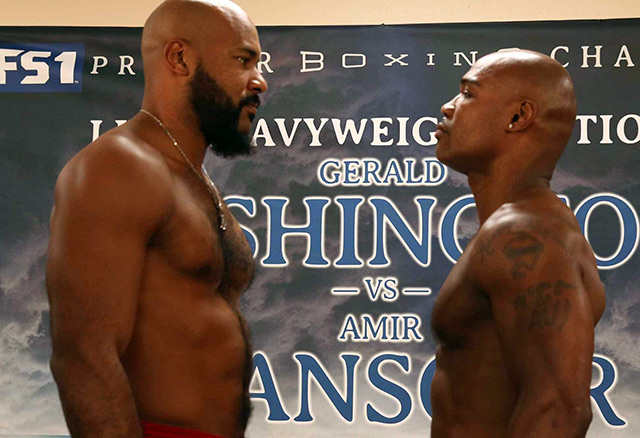 American heavyweights Amir Mansour and Gerald Washington battled to a 10-round split draw at Little Creek Casino Resort in Shelton, Wash. on Tuesday in the main event of a Fox Sports 1 card presented by Premier Boxing Champions.

Washington, 33, of Vallejo, Calif. controlled the early rounds, using his five-inch height advantage at 6-foot-6 to keep the shorter Mansour, 43, of Wilmington, Del. Mansour, who had won two straight after his first career defeat to Steve Cunningham in April 2014, struggled to get inside early as Washington landed right crosses and uppercuts pushed him back.

Mansour began to cut the distance in the middle rounds as Washington’s stamina betrayed him. Mansour’s wide-swinging left hands found their way around Washington’s guard, forcing Washington to hold to slow the pace.

Afterwards both men expressed disbelief at the judges’ verdict.

“This is boxing, this is fighting. You’re supposed to come in there and rumble, not run,” said Mansour in his post-fight interview.

“I knew what it was before I came over here, Al Haymon territory. I know if I didn’t blow him out I wasn’t getting the decision.”

Earlier in the night, 2012 U.S. Olympian Michael Hunter dropped Jason Douglas four times before forcing him to quit after the fourth round. Hunter (10-0, 7 KOs) scored a knockdown in each of rounds two and three, and two more in the fourth to end his first scheduled ten-round cruiserweight bout early.