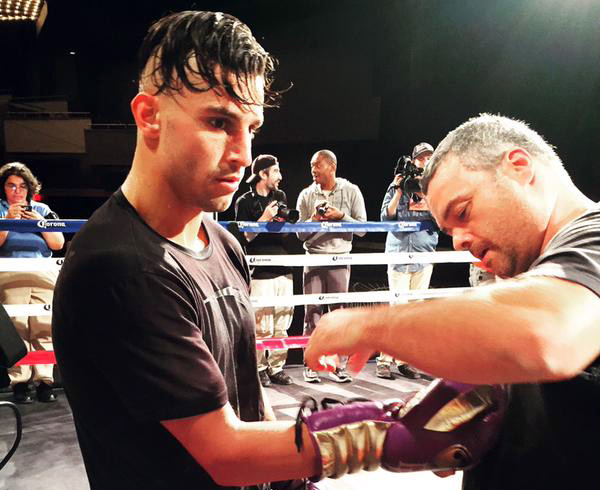 NEW YORK CITY – When David Lemieux met with the media in New York in August to talk up his middleweight unification match with Gennady Golovkin on Saturday, he didn’t seem to have a worry on his mind, as loose and carefree as a man on vacation.

On Tuesday, he once again greeted reporters in New York.

And Lemieux was again relaxed and playful, showing none of the dread a man tasked with facing perhaps the most feared puncher in the sport should have.

Asked what advice his promoters, Oscar De La Hoya and Bernard Hopkins provided him against Golovkin (33-0, 30 knockouts), Lemieux looked at a reporter with the seriousness of a traffic cop and replied: “Destroy him. Destroy him,” before admitting he was joking.

If some of Golovkin’s opponents have lost the fight before they stepped into the ring, undone by anxiety, then there is little evidence to support that Lemieux, a heavy underdog and single parent of a daughter in Montreal, will be a victim of his emotions on Saturday.

Lemieux (34-2, 31 knockouts) claims he won’t be undermined by nerves or have more butterflies in his belly, despite the obvious significance of the fight. It’s the first pay-per-view voyage for both fighters.

“Not at all,” he said following a media workout on Tuesday. “The ring is a square ring. There’s two fighters at it and whoever is at the top of their game, at this level every little detail makes a big difference. So I believe I’ve done everything I have to do to bring this fight home.”

When another reporter oddly asked him if he would have the “eye of the tiger” against Golovkin, Lemieux gamely played along.

The 26-year-old Canadian even laughed off a reference to Golovkin-trainer Abel Sanchez’s constant barbs.

Sanchez has predicted the fight won’t go past four or five rounds and has subtly needled Lemieux in comments he’s made to reporters at every turn.

“When did he say that? I don’t even remember,” Lemieux said with a chuckle. “I don’t pay attention to what he says. First of all, I’m not fighting Abel Sanchez. I’m fighting Golovkin. He can say what he wants, he wants to boost up his fighter. To me it makes no difference. Some trainers, they get over-excited and they want to start talking for their fighters. Oct. 17 is me against Golovkin and his trainer is going to swallow his words if that’s what he said.”

At another point on Tuesday, Lemieux was asked what he took away from his sit-down with Max Kellerman and Golovkin for HBO’s “Face-off” segment in which the fighters are seated in close proximity and asked to assess the other.

Beyond the size of Golovkin’s head, which he said was enormous, Lemieux said he was trying to understand his English to get a read on him.

“I was trying to figure out what he was saying because his English is pretty good but he has to keep working on it because there are some words he’s not too good with,” said Lemieux, who won the vacant IBF title with a dominant decision against Hassan N’Dam in June, rebounding from two straight losses in 2011. “But I was just observing him and looking at how he is. Eyes don’t lie. Everything is in the eyes. It’s nothing. It’s part of the game. It was fun. I was visualizing him a bit.”

And what did Lemieux observe in Golovkin’s stare?

“I saw caution,” he said. “He’s very confident in his abilities. I don’t doubt it. But he’s also aware of what I bring to the table, so it’s going to be a serious fight. I’m a confident fighter.”