Lucas Matthysse’s supporters plead for change and another chance 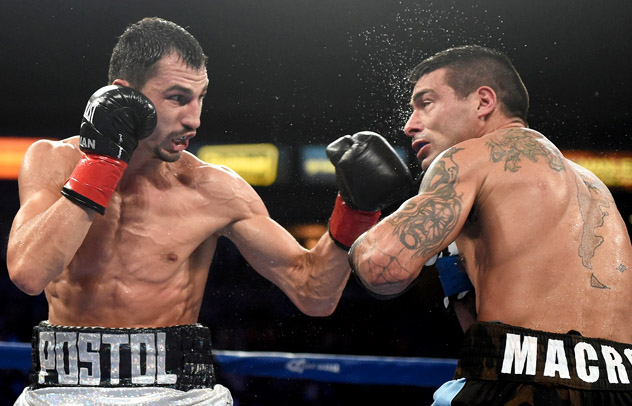 In the wake of Lucas Matthysse’s devastating loss to Viktor Postol on Oct. 3, members of his entourage, family and former team members have taken to social media and other outlets to vent their frustration at what they perceive as a less-than-ideal training regime for the Argentine slugger.

“I am holding back a few things just so I don’t hurt some people,” said Lucas’ sister Soledad Matthysse, herself a unified WBA/WBC female featherweight titlist, leading the charge in an appearance on local radio show “Cerca del Ring.” “Personally, I saw that my brother’s arms felt heavier, as if he had over-trained. I asked him a few things about his training and perhaps it was his swimming or his weight-lifting work.”

When asked about what exactly went wrong, Soledad quickly pointed at a general lack of direction within the training camp.

“There were no ideas,” said Soledad. “Every fighter has a Plan A but then there’s a Plan B and a Plan C but we didn’t see [those]. Everyone was banking on Lucas landing a couple of big shots and then the fight would be over but that didn’t happen and that’s when the ideas didn’t surface.”

Without pointing fingers or “naming names,” Soledad did underline the general impression whispered among Argentine fans and press alike about the size and scope of Lucas’ training staff, comprised by a large and diverse group of people that includes two trainers (Luis Barrera and former champ Juan Coggi), as well as a physician and a physical trainer.

Soledad simply expressed the concerns about a team in which job descriptions are sketchy at best, which leads to a few areas being left unattended while others are given too much attention and with virtually everyone weighing in on every issue.

“Arano, please, clean up Lucas’ entourage,” pleaded Soledad in one of her few comments directed to a specific member of Team Matthysse, in this case, his manager/promoter Mario Arano. “If Lucas wants to be a champion, he has to think about himself, not about his friendships. If people love him, they will let him go and allow him to continue growing. I have nothing against Arano; we get along very well. But Lucas will have to sit down and fix a few things, make a general ‘housekeeping’ job. I heard that [punching pad expert and former lightweight contender Eduardo] ‘The Surgeon’ Morales is not part of the team anymore. He used to be a big help. I believe Lucas has a lot of people doing nothing around him.”

Morales’ absence was noticeable to Soledad in Lucas’ movement around the ring and in his general mobility, which was critical against Postol.

“Perhaps he needed someone who would push him in his punching pad routine, to force him to move around,” said Soledad. “I never do pad work with someone who’s just standing in front of me. I use people who force me to move my legs and move around the ring.”

“They told me they didn’t need me because they had a lot of sparring partners,” said Morales, during an interview with local website Campeones en el Ring. “In the two fights I worked with Lucas [against Roberto Ortiz and Ruslan Provodnikov], he was fast, accurate and motivated. This time, he didn’t shine, he didn’t work on his sidestepping or his waist movement and he was unable to dodge Postol’s jabs.”

Morales was surprised to learn that his services were not required for this particular fight, in which Postol’s style required the former’s work.

“The key was not to fight head-on but rather to allow [Postol] to box and come in diagonally moving [Lucas’] waist to dodge Postol’s straight hands. That’s what I learned in the Cuban school; that’s how you close in on a guy with long arms,” said Morales, who fought Shane Mosley for the IBF 135-pound title back in 1998 and has been making a name for himself as a trainer ever since.

Morales went further by doubling down on his comments and going against Team Matthysse’s decision to train in Argentina.

“It is good to train in the States because that’s where the big leagues are and there are a lot of sparring partners that are up to Lucas’ level. Lucas needs to train there two months before his fights. I hope [Matthysse’s promoter] Oscar De La Hoya can arrange a rematch against Postol. I believe Lucas deserves it and I believe he [would have] won.”