Pacquiao denies that he spoke to Mayweather about rematch 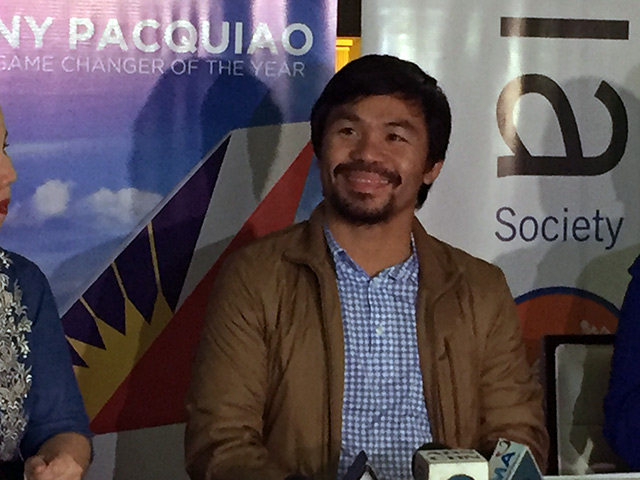 MANILA, Philippines – Manny Pacquiao denied earlier reports that he had spoken with Floyd Mayweather Jr. about a rematch, saying he will be speaking with promoter Bob Arum about his next and final fight when he arrives in New York this week.

Speaking at a press conference at Ninoy Aquino International Airport on Sunday evening in Manila, Pacquiao told reporters that he had not had discussions with the recently-retired American boxer, despite an Agence France-Presse report citing him as saying such.

“No, I didn’t talk to him. But I did talk to Bob,” said Pacquiao, who lost a unanimous decision to Mayweather this past May in the most financially lucrative fight in boxing history.

Pacquiao, an eight-division boxing champion, will be recognized with the 2015 Asia Game Changer Award at the United Nations in New York City on October 13.

Arum, when asked by Yahoo! Sports about reports of Mayweather negotiations, said he had “no idea what he’s talking about,” adding, “Mayweather is retired and I take him at his word.”

Pacquiao says he will discuss with Arum about his options, which also include his one-time gym mate and former junior welterweight titleholder Amir Khan. Khan (31-3, 19 knockouts) had told AFP at the AIBA World Boxing Championships in Qatar last week that he felt there was a “75 percent” chance the fight with Pacquiao happens.

“With Amir, we don’t have problems with his camp,” Pacquiao said. “We initially talked when we were in London last year. We talked about a possible fight.”

The 36-year-old Pacquiao, who is serving in his second term as congressman in the Philippines, announced his intention to run for the Philippine Senate in 2016 last week, telling AFP that he would fight his last fight in a 21-year career in March or April, just before the general elections take place on May 9.

“When I become senator I need to focus,” Pacquiao said Sunday.

In an interview with AIBA in Qatar last week, Pacquiao said he didn’t have a preference for whom he fought. In addition to Khan and Mayweather, Pacquiao also mentioned Juan Manuel Marquez, whom Pacquiao has two decision wins, a draw and a knockout loss against in four prior fights, and Tim Bradley, whom Pacquiao has split a pair of fights with.

“I’m a boxer, my job is to fight. Whoever my opponent is, I will accept. One of those, Amir Khan, Marquez, Bradley or rematch with Floyd Mayweather,” said Pacquiao.

Pacquiao told this reporter he would want the fight in the Philippines. He had previously said he wanted to bring the fight to Qatar.

Arum said to Yahoo! that Top Rank president Todd duBoef will be speaking with Marquez’s promoter Fernando Beltran of Zanfer Promotions this weekend about a fifth fight with Pacquiao, while adding that WBO junior welterweight titleholder Terence Crawford could also be a possibility.

Attempts to reach Arum through Top Rank on Sunday were not answered.