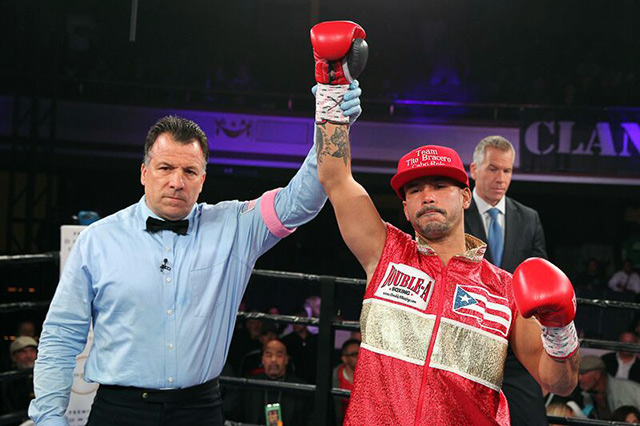 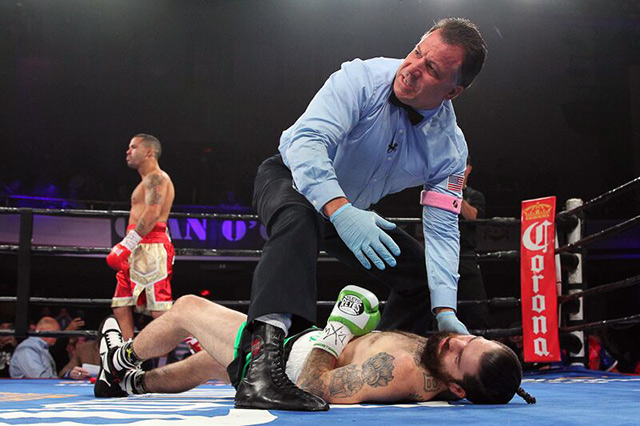 LOWELL, Massachusetts – Brooklyn’s Gabriel Bracero scored a stunning first-round knockout over Danny O’Connor in front of a partisan New England crowd at the Lowell Memorial Auditorium on Saturday in a rematch of a 2011 bout.

O’ Connor, who hit the canvas hard and did not get up for a full 10 minutes, needed medical assistance to make it up to a seated position in the center of the ring.

The official time of the knockout was 41 seconds of the first round.

Bracero (24-2, 5 Knockouts) measured the southpaw O’Connor (26-2. 10 KOs) as soon as he saw the first opening and unleashed an overhand right that landed square on the jaw line. O’Connor’s head hit the canvas with a thud which reverberated throughout the arena. Referee Arthur Mercante Jr. quickly waived the bout off and asked for the doctor. 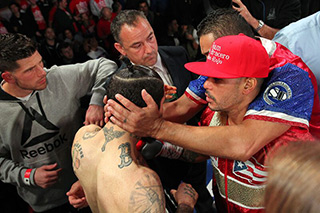 Bracero subdued his celebration and immediately showed concern for O’Connor. Once O’ Connor made it up to the stool, Bracero ran over to ensure he was okay and offered words of encouragement.

“I told him after my last fight when I lost I fell into deep depression,” Bracero said immediately after the bout. “I told Danny to not let that happen to him. He should be proud of himself.”

Bracero’s trainer/manager said the game plan was to attack immediately.

“We sent him to camp in Florida and he came back a beast,” said Tommy Gallagher. “We are hearing Adrien Broner is the next for Gabe.”

Bracero won an eight-round unanimous decision over O’Connor when they met in April 2011 in Texas.

Taking in the action at ringside was Lowell’s own Mickey Ward who knows O’ Connor personally.

“You never like to see a fighter hurt like that,” Ward said, “(but) it’s boxing, this stuff happens. There’s nothing we can do. I just hope he will be okay.”

In the evening’s co-feature, knockout artist Jonathan Guzman continued his streak of stopping every opponent he has faced as a pro by stopping Danny Aquino by ninth-round TKO.

Guzman celebrated his victory in the ring by dipping his hand in a bag of ice.

The Dominican Republic-born Guzman (20-0, 20 KOs) got out to a quick start by knocking Aquino down twice in the second round with massive right hooks which connected on Aquino’s neck and head. Aquino managed to get back up and survived the round.

Guzman landed a big right hand in Round 9 which dropped Aquino. The referee called the end to the fight and did not even begin the count much to the chagrin of Aquino and his corner, who protested the stoppage.

The official time of the stoppage was 1:19 round 9.

“I hurt both my hands in the second round when I knocked him down,” Guzman said through an interpreter. “I didn’t panic because I knew the knockout would come soon enough.”

In a bout of rallies and shifts in momentum, Kielczewski landed the harder shots and was the busier fighter but made mistakes which allowed Vazquez to get back into the fight.

Kielczewski had Vazquez hurt in the third and sixth rounds but could not put the fight away leaving the door open for the 37-year-old Vazquez to come back with a series of left hooks.

Kielczewski went to the body often and brought the crowd to its feet in the third. Vazquez answered with a left hook then landed a straight right hand to back Kielczewski up. Both men exchanged big shots as the round ended.

Vazquezz sported knots under both eyes and Kielczewski had a nasty cut over his left eye as the final round started. Kielczewski controlled much of the round until a counter left hook from Vazquez hurt him. Kielczewski started to hold on to stave off further shots from Vazquez and managed to survive the round to get the decision.

“He got me in the last round,” said Kielczewski immediately after the bout. I knew what I was doing but I couldn’t feel my feet. This is the first time that ever happened to me.”

In other action Steve Ormond improved to 19-2 with 10 KOs by defeating Michael Clark (44-14-1, 18 KOs) first round knockout. Ormond targeted the body immediately and scored 2 knockdowns to blow Clark away. The official time was 1:49 of the opening round.

O’ Sullivan delivered a punishing body shot which Ward would be proud of. Toribio keeled over in pain and the referee stepped in to stop the bout.

Titus Williams improved to 3-0 with 2 knockouts by defeating Arthur Parker by second round TKO. The official time of the stoppage was 1:04.