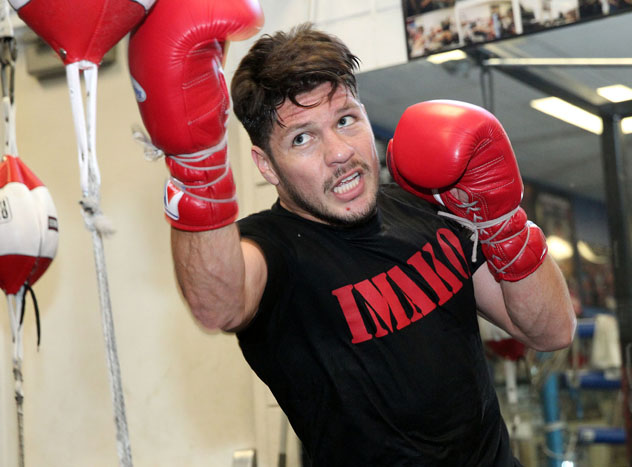 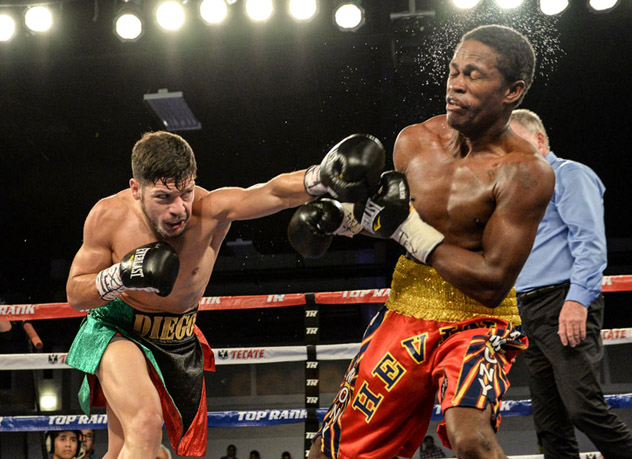 Diego Magdaleno (28-1, 12 knockouts) challenges Terry Flanagan for the WBO lightweight title in Manchester, England, on Saturday, and looks to make his second opportunity count in his quest to fulfill a dream.

Eighteen months ago, the Las Vegas resident ventured to Macau, China but came out on the wrong end of a hard-fought split decision to WBO junior lightweight titleholder Roman Martinez – a verdict many felt could have gone either way.

“The first time I came up a little short on the scorecards.” Magdaleno told RingTV.com. “In my mind, I won the Martinez fight. I didn’t get the decision but look how far I went last time. Now, I have experience traveling overseas and I’m ready.”

The soon to be 29-year-old left for Southern California two months ago to set up training camp under the watchful eye of Joel Diaz. Around the same time, the acclaimed trainer was released from his duties by welterweight star Tim Bradley.

“Things happen for a reason,” Magdaleno said. “Tim and his team had different ideas and I wish him the best but it’s my time to shine. I need that world title.”

Flanagan and Magdaleno meet at the Manchester Arena on the same card as Liam Smith versus John Thompson, who will contest the vacant WBO junior middleweight strap.

RingTV.com – What are your thoughts on facing Terry Flanagan?

Diego Magdaleno – This is a great opportunity. It’s an evenly matched fight and I feel really confident. I’ve seen footage of [Flanagan]; he’s a stand-up guy and we’ve been going over what he’s done in the ring and who he’s fought. It’s a great match up for both of us. This is going to be one of those fights where the best man wins. Of course, I favor myself but I think it’s going to be a great fight.

RTV – Having watched tape on Flanagan, what do you feel are his strengths and weaknesses?

DM – He has the height advantage over me and he’s fought in a higher weight class. That could either hurt him, coming down to 135 pounds, or he could bring his power with him. He’s got that left-handed stance and he can box. I’ve seen him against other opponents and he knows how to use the ring and move around but he can also sit there and slug it out.

I think his weakness is that he hasn’t fought somebody like me. [Jose] Zepeda was a good step up, a good name for him but the fight ended quickly [because of an injury to Zepeda’s shoulder]. I think I’m a solid, world-class opponent.

DM – Training camp has been on fire ever since we got word of this fight. Joel Diaz is a phenomenal person. He talks to me every day in the gym, even afterwards when we’re just hanging out. Joel has been in this position many times before; he’s been overseas with Julio [Diaz, his brother] and he’s been there with Tim Bradley. He has a great outlook on what’s going on and is doing everything within his power to make sure I’m prepared mentally and physically.

I’ve been in the ring [sparring] with Luis Ramos and he’s a talented fighter. I’ve also sparred Victor Ortiz, who is a lot bigger and stronger but he’s a southpaw like Flanagan. I’ve worked with my younger brother Marco, who is also training with Joel and will be making his pro debut soon.

RTV – Would you say the pressure is on Flanagan because he’s fighting at home?

DM – He has to please the crowd. I’m going over there to fight and get a world title. I have a loss on my record, whereas his record is undefeated and I’m sure he’s trying to keep that winning streak alive. I have nothing to worry about. I’m going in there to do damage and that’s my only focus.

RTV – You lost to Rocky Martinez in April 2013 and, since then, you’ve won five fights. How have they helped prepare you for this opportunity?

DM – It made me a lot hungrier. I’ve put every single opponent on the canvas since then and knocked out three of them. That’s showing you guys, the promoters and everyone in my division that I’m coming after what’s mine. Nothing is stopping me. I’m with Joel Diaz and [manager] Frank Espinoza, so I have a great team behind me. I’ve been doing some damage at 135 pounds. A lot of people are asking if I have the power at lightweight but I think I’m stronger. I’m not looking back and this is the division where I’ll make my name, starting with this fight.

RTV – Since that loss, all of your fights have been outside Las Vegas. You’ve been in California and Texas. Has traveling helped you coming into the Flanagan fight?

DM – It has. I’ve been spoiled fighting in [Las] Vegas and traveling has been on my agenda ever since I left my old team. I’m not training at home anymore, and camp in California is a four or five hour drive. Now, I’m accustomed to being far away, fighting in different places like you said. I traveled to Texas three times, which helped mature me as a person and it also took me out of my comfort zone. Joel doesn’t want me to be comfortable. He wants me to be able to fight in uncomfortable circumstances because that’s when you learn the most.

RTV – You’re coming off a win over Jose “Chelo” Gonzalez. Can you tell us about that fight?

DM – The Gonzalez fight was pretty slow in the beginning. We knew his style was dangerous early but then we started picking him apart. I had to stick to the game plan and my focus was to break him down as the fight went on.

RTV – Joel is not working with Tim Bradley anymore, so he’s free to spend more time with you. Has that helped?

DM – He dropped everything and it worked out great for me. I benefited from it because there are no distractions. Coach Joel has devoted all his time to me and I’m his pride and joy right now. He’s going to make a world champion out of me. Everything happens for a reason.

RTV – What are your thoughts on the lightweight division?

DM – It’s a talented division and it’s about who wants it the most. Right now, I think it’s all in my favor. I’ve worked hard to get back in position for a world title fight and it’s time to show the world what I bring to the table. It’s going to be hard to get that title away from me when I get it.

RTV – What is your life away from boxing like?

DM – I have a great family and I’m really looking forward to Marco starting his professional career. He looks up to me and [middle brother] Jessie and is more than motivated to get there himself. I want to be the big brother and lead the way with world titles. I’ve also been working with Global Sports Streaming (GSS), as a commentator. It’s kind of life outside of boxing, although I’m still dealing with the sport.

RTV – In closing, do you have a message for Flanagan?

DM – Not really a direct message to Terry. I know he’s bringing his ‘A’ game and I’m gonna bring mine, so we’ll settle it in the ring and may the best man win. This is a gentleman’s sport and I’m not the type of guy to bash an opponent. I give everyone respect who gets in the ring because boxing is hard and you have to give credit where it’s due. I just want a great fight and I want to please the fans. I’m looking forward to it.