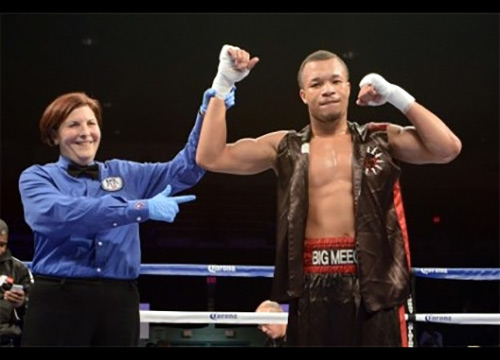 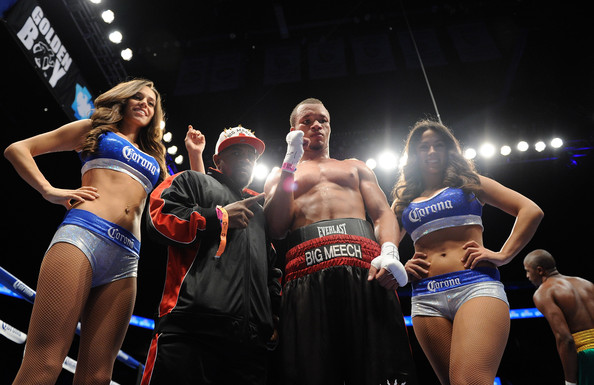 D’MITRIUS BALLARD
Age: 22
Hometown: Temple Hills, Maryland.
Weight class: Super middleweight
Height / reach: 6-foot (182 cm)/ 74 inches (187 cm)
Amateur record: 102-15
Turned pro: 2013
Pro record: 9-0, 7 knockouts, 1 no-contest
Trainer(s): Bernard Roach
Manager: Lamont Roach Sr.
Promoter: Golden Boy Promotions
Twitter: @DmitriusB
Best night of pro career: Ballard has quietly gone about his business defeating seven of his nine opponents inside the distance. However, he’s his own harshest critic, insisting he could have improved on every performance. Ballard believes his best outing was on the undercard of Danny Garcia-Zab Judah at Barclays Center in April, 2013, when he stopped Marcus Clay.
“The most notable was probably my second fight,” Ballard told RingTV.com. “That fight, I think I did exactly what my coaches wanted me to do. I got in the ring, worked my jab, attacked the body and I put the pressure on him and broke his will and eventually got the stoppage in the second round.”
Worst night of pro career: The Maryland-born prospect is dissatisfied with his wins over Lekan Byfield and Josue Ovando.
“The two fights that did go the distance,” he said. “I know I could put my shots together more and use my experience in the ring and I would have got the stoppage.
“I didn’t listen to my corner and use my skills; I relied on just my power and didn’t put my punches together.”
Next fight: Ballard takes part in his first scheduled eight-rounder when he faces his most experienced opponent to date in Eddie Hunter.
The 28-year-old Hunter of Seattle, Washington has had 25 fights, going 10-13-2 with 3 knockouts. He’s been stopped seven times, notably by Jesse Hart and Dominic Wade. He has also taken former prospects Dmitry Chudinov and J’Leon Love the distance.

Ballard-Hunter takes place on Saturday at the StubHub Center, Carson, Calif. in support of Lucas Matthysse-Viktor Postol. Although Ballard is used to appearing on the undercards of big fights, he is grateful of the exposure this opportunity has afforded him.

“From early in my professional career, I’ve fought on big cards, from Bernard Hopkins, Danny Garcia, Lamont Peterson,” he said, “but this one is special because it’s the first time I’m fighting on the West Coast. It’s an opportunity for me to showcase my skills for the West Coast fans.”
Why he’s a prospect: Ballard was a highly decorated amateur standout. He was a silver medalist at the Junior Olympics, Silver Gloves champion in 2009 and Under 19 champion before graduating to the seniors, in which he became a five-time Ringside World champion, four-time PAL champion. Ballard also won bronze at the 2010 National Golden Gloves, though corrected that by winning gold at the 2012 tournament and was fourth at the USA Nationals.
He represented America as a junior, youth and senior, fighting in Armenia, France and Azerbaijan.
In the unpaid ranks, Ballard twice met fellow unbeaten prospect Jesse Hart, at the Olympic trials and the Reload tournament. He feels he won the second fight but officially lost on both occasions. He also fought highly regarded Antoine Douglas and 2012 Olympian Terrell Gausha, dropping decisions against both.
Recently, Ballard spent 22 days with George Groves in Big Bear, Calif. helping prepare George Groves for his ultimately unsuccessful WBC world title bid against beltholder Badou Jack. He says they sparred every other day, doing six to eight rounds.
It wan an enlightening experience for Ballard, who made the most of it.
“Seeing these guys train, how focused they are, how serious they are about their conditioning, seeing how champions train,” he said. “I’m learning how I can get to that level and stay at that level.”
Middleweight titleholder Gennady Golovkin was also in camp, though Ballard didn’t spar with him. Previously he’s sparred with the Peterson brothers, Lamont and Anthony.
Ballard feels he has many facets to his game, “I believe I’m a boxer-puncher. I have good skills, good footwork, my defense, great coaching. I also have power behind my punches. I believe I’m a well-rounded fighter.”
Ballard humbly acknowledges the opportunity afforded to him by his promoter, Golden Boy Promotions, in particular, CEO Oscar De La Hoya and East Coast President Bernard Hopkins.

“I always see Bernard and we have conversations. I’ve met Oscar but not as much as Bernard,” he said. “I appreciate and am thankful to Golden Boy. I wouldn’t be able to experience all the things I have and being on the platform I am now. I really appreciate everything, Golden Boy, Oscar, Bernard and the whole team. They’re a big family and I’m happy to be part of it.”

“He is a very determined young man that gets better and better every fight,” said Diaz. “I am happy to say that he recently helped George Groves in camp for his world title fight vs. Badou Jack and the report I received was he did very well. That, of course, says a lot since he is just getting started and coming from the camp of an experienced young man like Groves made me really happy.

“One thing that stuck with me is how he is not just satisfied with a win, where many fighters celebrates victories, he was not celebrating after his June fight and that shows a lot of character. Although he won the fight, he was not happy with his overall performance and that is because he knew he could have done better and that is what separates a champion and a challenger.”
Why he’s a suspect: Ballard is a perfectionist. His own biggest critic, he scrutinizes every performance.
“[I] make sure, in the ring, I stay focused and I listen to my coaches and take my time,” he said. “Sometimes I feel I rushed. I don’t have to rush. I can take my time and I’m going to get the results I’m gonna get, if I listen to my coach and take my time.”
Ballard has never been cut but says he’s been on the canvas once, in 2011, as a 17-year-old: “In the Golden Gloves, in the early stages, against Jarrett Hurd [an unbeaten pro, with a record of 16-0, 10 KOs], I got caught with a really good right hand. I got up to win the fight.”
Story lines: Ballard enjoyed a good upbringing growing in Temple Hills, a short ride from the nation’s capital, Washington DC.
“I had an amazing time, he said. “I had an amazing mother and father who made sure I had everything I needed, not everything I wanted but everything I needed, day-by-day, food, clothes, school. They made sure I had everything I needed. I was a happy child.”
From a young age, Ballard was a talented American football player and came across boxing in the off-season, close to his 11th birthday.
“One of my friends started boxing and, one day, he told me to come to the gym,” he explained. “I went and it seemed pretty cool. I had nothing to do because the football season had finished, so I was just in the house. I decided I’m gonna try boxing. I told my father. We went to the gym. We sparred and never looked back from there.”
He continued to play football and box and says he had over 30 Division One scholarships to play football but ultimately decided that his future lay in boxing.
“It was a family decision,” he said. “We all felt boxing would be the better choice for me in my future career. So far so good, I don’t regret my decision at all.”
Ballard’s favorite boxers are Roy Jones Jr. and Terry Norris and hopes to follow in their footsteps and reign supreme in his division.
“I would like to be undisputed super middleweight champion of the world,” he said when asked of his goals in boxing. “I want to dominate my weight class and be known at the end of my career as one of the greatest boxers to ever lace up some gloves.”
He maintains a simple life away from boxing: “I don’t do much. I’m boring. I’m in the house. I don’t really go out and party. My daughter was just born a few weeks ago. I spend time with the family.”
Fight-by-Fight Record