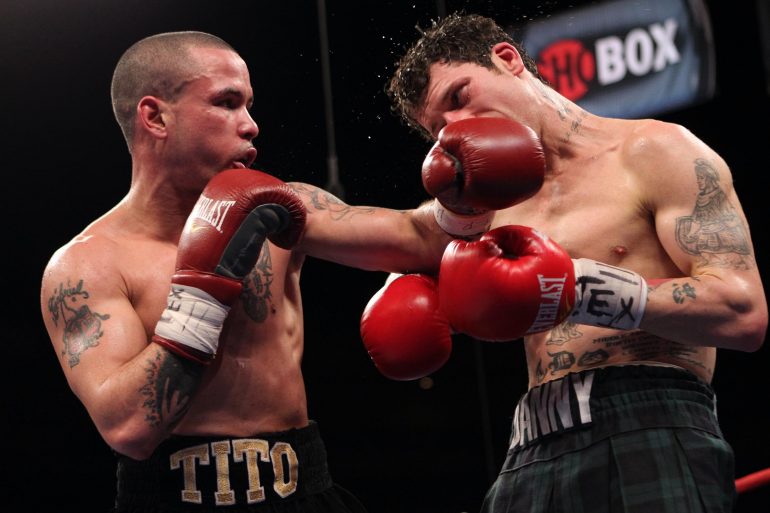 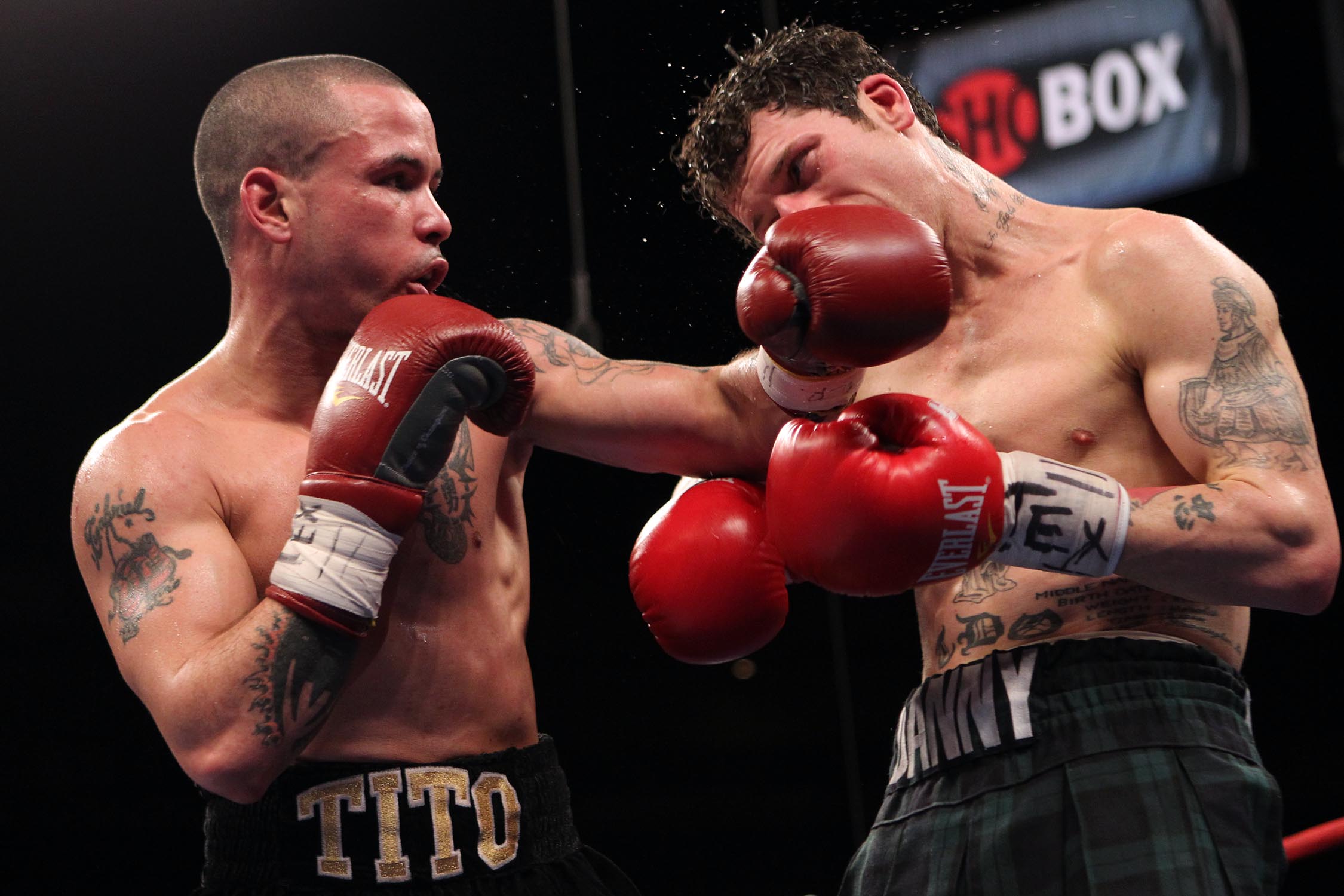 Gabriel Bracero (left) connects with a left hook upstairs on Danny O’Connor in their first bout on April 8, 2011, a unanimous decision win for Bracero. They meet again on Oct. 10, 2015. Photo credit: Tom Casino/Showtime

The kid lost. They all lose, most of ’em, the ones not named Mayweather…

But it’s a bad, big deal if the reaction after the loss indicates it was taken to heart.

So Tommy Gallagher watched and listened and assessed…and was happy, I guess you could say, when he figured out Gabriel Bracero would be OK.

The loss – he’d lost before, back in 2012 to Chop Chop Corley – on April 11 at Barclays Center, could have been a backbreaker.

Bracero, age 34, grew up in Sunset Park, Brooklyn, where he found a loving community but also trouble. The usual stuff, the temptations, the bad crew to run with, handling black market transactions, carrying implements to suggest an ability and propensity to protect turf and rep in violent fashion.

“He’s the nastiest sonuvabitch you’ll ever find,” Gallagher will tell you of Bracero, speaking of a past-tense persona, of the one who did that time in lockup for shooting at someone else, but using the present tense, maybe to remind the kid of what he needs to avoid, so he isn’t a statistic of incarceration.

Last April, it was Bracero, entering at 23-1, taking on 16-0 Felix Diaz, with fewer fights but chops, an Olympian. It was a decent rumble and not so one-sided. But the power of the Dominican Diaz spoke out; Bracero went down twice, did well to hang in there, and lose a UD 10.

Gallagher consoled the kid. He needed it; fans sometimes don’t get it, the pressure on these guys. The chances aren’t infinite. Gray hair for us means cracking jokes and whining about getting old. To them, it means a door being slammed shut. The door is the one to “success” and maybe, even more so, financial stability. College for the kids…or not. A route out of the “statistic” path…or maybe, God forbid, not…

A win over Diaz would have maybe meant a title crack next, maybe against an Adrien Broner or a Danny Garcia. A loss…what would that mean? Bracero didn’t think about that possibility before…but afterward, yes. Maybe there was a tear or two, post-loss; I can see that. Bracero is impassioned, will tell you he’s blessed to get a second chance, to not be that mere grim statistic, that guy in a cell for the rest of his life.

So, Tommy G, how did Bracero react?

“He acted in a pretty good way,” said the New York Boxing Hall of Fame entrant, a Queens and NYC-boxing fixture, who also has his hand in ongoing TV and movie projects. “I was pretty impressed by that.”

Here is a lesson in Tommy-speak: “Pretty impressed,” from this Tough Love purveyor, means he was mightily impressed. “He fought a 2008 gold medal winner and didn’t sulk.”

This means Bracero’s chances in his next bout, which comes on Oct. 10, against Danny O’Connor (26-2 with 10 knockouts; age 30; from Framingham, Mass.), in Lowell, Mass., are maybe that much better. “It’s rematch; they fought in 2011. “Tito” won. Danny wouldn’t fight him again unless it was on his turf. He’s looking for an edge. Eff it; we fight anywhere.”

OK, so is this that silly cliche, a “must-win”?

“Every fight is a must-win,” Gallagher continued. “That’s how you have to treat it. Losing two in a row is not a big deal…but my kid is 34, getting up there, he has two or three more years to be productive. We will be in Lowell, in his environment, and we’re gonna try and beat the s–t outta this guy.”

Lowell relies on yellowed clippings to prove it but it’s a fight town. Micky Ward’s ‘hood. Should be a good setting for this rumble…

“Yeah,” Tommy G said, “I knew a lotta guys from there and that part of the the area. In the ’70s and ’80s…they’re making movies about them now.”

For what it’s worth, Gallagher was headed to see “Black Mass” with his missus right after he got off the phone with me. And soon, he will be watching another drama, Bracero-O’Connor, and he’s hoping his “sonuvabitch” will piss Lowell off.

Biggest drama in which Woodsy takes part? Whether or not to buy the Cinnabon Gooey Bites. Heat some up right here.