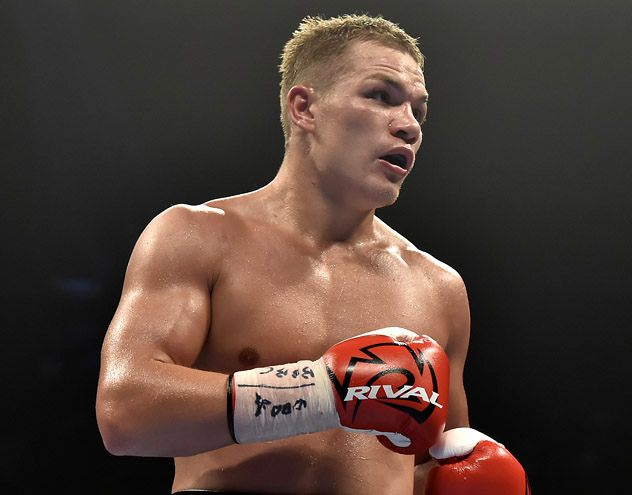 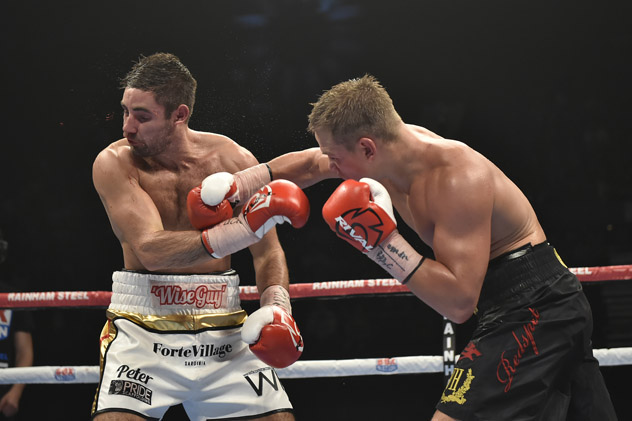 Russian super middleweight Fedor Chudinov extended his unbeaten run to 14-0 (10 knockouts) with a convincing 12-round unanimous-decision victory over Frank Buglioni in London on Saturday.

Chudinov, rated No. 9 by THE RING at 168 pounds, was largely dominant although he was dropped illegally by a heavy right hand following the bell to end Round 6. The pro-Buglioni crowd cheered soccer-style, however the infringement earned the home favorite a two-point deduction from the referee and the powerful Russian soon regained control.

“I’ve grown after this fight,” said Chudinov, when interviewed by BoxNation in the U.K. “I respect my opponent and he is a very good fighter. Once I’ve had a rest I’ll go into training for a rematch with Felix Sturm.”

From the opening bell, Chudinov set the pace behind a thumping left jab. The force of that particular punch seemed to shock Buglioni but, as would be the case throughout the night, the Englishman bravely returned fire despite being outgunned.

The pace more than the weight of the shots seemed to prevent Buglioni from having any real success and the visitor consistently put his foot on the pedal any time his opponent attempted to rally.

The 28-year-old Chudinov is relatively new on the world scene. His coming out party was a split-decision win over the aforementioned Sturm, in May, a victory bolstered by the fact that he defeated the former four-time middleweight titleholder on German soil.

It must be said, however, that the Russian’s biggest nights lie ahead as he is still a work in progress. Interestingly, he was trained for this particular fight by multi-weight world champion Roy Jones Jr., who was recently granted Russian citizenship by President Vladimir Putin.

Buglioni (17-2-1, 13 KOs) is very popular in his home city of London, but a sixth-round stoppage loss to Sergey Khomitsky, in April of last year, was a serious warning sign. Former two-weight world titleholder Steve Collins and brother Paschal were brought in as trainers but Chudinov was a bridge too far tonight.

“It was a great opportunity and Fedor was the better man,” said Buglioni afterwards.

Also on the card, former heavyweight title challenger Dereck Chisora labored his way to a 10-round unanimous-decision win over Marcelo Mascimento. The fight was devoid of any worthwhile action and the crowd greeted the spectacle with virtual silence.

The official score handed in by the referee was 99-91 in favor of the enigmatic Londoner.