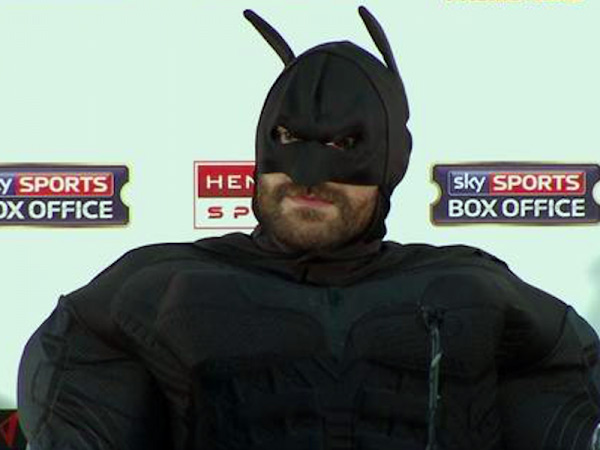 THE RING heavyweight champion Wladimir Klitschko has branded Tyson Fury “a bipolar psychopath” following the pair’s bizarre press conference in west London on Wednesday, which included the unbeaten Brit arriving dressed as Batman and having a staged scrap with an intruder – aka ‘The Joker’.

Klitschko, the WBA, WBO and IBF titleholder, and Fury (24-0, 18 knockouts) were in the English capital to promote their eagerly anticipated Oct. 24 clash in Dusseldorf, Germany. Fair to say, the Manchester man’s madcap antics, all conducted in good taste and with humor, completely stole the lunchtime show.

The all-conquering Ukrainian admitted he was both amused and bemused by the challenger’s remarkable over-the-top performance. However, while initially he described the comical scenes as the most enjoyable of his entire career, he later turned a little more serious.

In classic Klitschko style, he suddenly declared Fury’s behavior to be that of someone mentally unwell and requiring therapy. Those comments, aired on Sky Sports News HQ rather than at the main top table conference, may have been tongue in cheek but, given Fury’s well-publicized battle with depression, could be also deemed below the belt. They were cut from Sky’s later wrap-up.

“That’s the most entertaining conference I have been at in 25 years boxing. It was funny and amusing,” said 39-year-old Klitschko (64-3, 53 KOs). “But a lot of the statements and nonsense that he said is because of the insecurity inside him.

“So I definitely think Tyson Fury is a bipolar psychopath and he needs treatment and that I can make him a better person. I have done the same with a lot of other guys previously and the way of the treatment is the fight. The treatment has already started for him.”

After the Batman and Joker caper Fury, THE RING’s No. 3-ranked heavyweight, returned in smart suit and tie and proceeded to hold court with the mainly British press. He wrapped up a loud, boisterous rant by asking anybody in the audience not backing him to dethrone Klitschko net month to make themselves known. Unsurprisingly, there were no takers. It was clever stuff from the 6-feet-9 self-proclaimed ‘Gypsy King’.

“I wanted him to know what time it is. I’m not here to play games. He says he doesn’t want to hurt people, well then he’s in the wrong sport.” Fury, 27, said in a separate interview with SSN HQ. “I wanted to send a message out to him and I he got it loud and clear.

“I do think I’ve rattled him, properly. If anything is going to rattle him that will have done it because it was a hell of a show. He can try and do what he wants but he is boring. I just want to beat the man who is the man at the moment. This is my time to shine. There are no ifs. I will be victorious. I will be heavyweight champion. I am going over there to knock him out. “

Klitschko responded to the idea Fury has needled him in dismissive fashion and also denied he is in any way taking him lightly.

“How can this all affect me? I have seen a lot of fighters at many press conferences before. At the end of the day, I let my fists do the talking in the ring. That’s going to happen on Oct. 24 in Dusseldorf.

“I am preparing for one of the toughest battles I’ve had – just like every fight it can be complicated. He is younger, heavier, with a longer reach as well. I am not underestimating him. As a boxer, he’s very unpredictable. He probably doesn’t even know his own plans. I’m expecting a very competitive fight.”