Frank Buglioni talks Fedor Chudinov: ‘I know I can hurt him’ 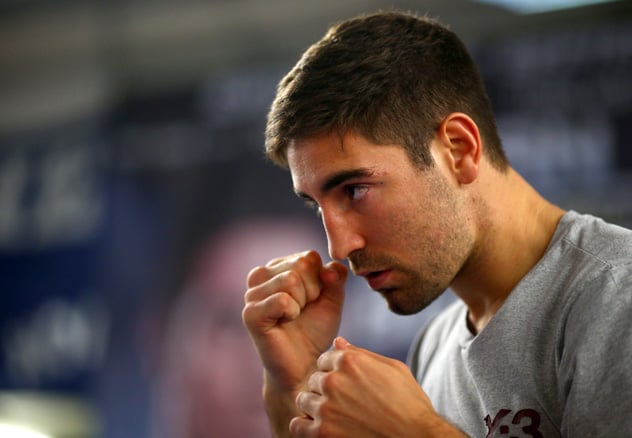 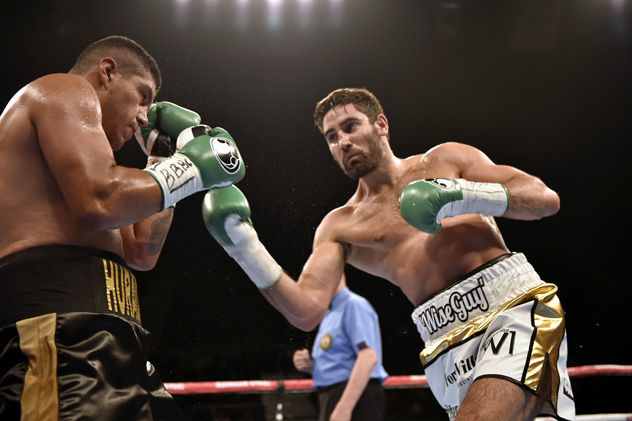 Frank Buglioni (R) would push the action to a fifth-round knockout victory over Fernando Castaneda in July 2015. Photo by Leigh Dawney/Getty Images.

When British super middleweight Frank Buglioni discovered that a July clash with Fedor Chudinov had been postponed due to the unbeaten Russian sustaining a badly broken nose in sparring, he was beyond frustrated.

A torturous training camp had been nearing its end and Buglioni (17-1-1, 13 knockouts) was primed to take on the most dangerous, albeit exciting, assignment of his career. Injuries, to opponents and self, are a necessary evil in the fight game but that does not make them easy to deal with.

Two months on and Buglioni has a new lease on life, and the immensely popular 26-year-old insists that victory will be his when he steps into the ring with Chudinov this Saturday in London.

“The postponement was a blessing in disguise,” said Buglioni, who scored a fifth-round knockout of late substitute Fernando Castaneda on the original July date.

“I completed back-to-back training camps and continued to work on my tactics for Chudinov. We also brought in fresh sparring partners, so it’s been brilliant and I feel that I have come up another level.” 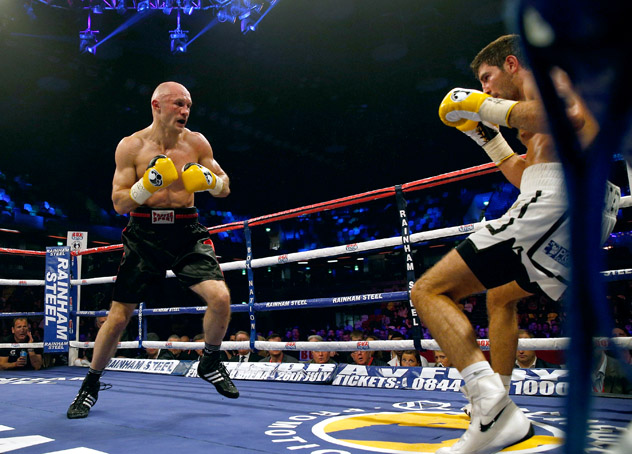 Buglioni won his first 13 professional starts and scored nine knockouts. However, in April 2014 he was matched with a formidable European gatekeeper, Sergey Khomitsky, and succumbed to a shuddering sixth-round stoppage.

Shortly thereafter, Buglioni defected from London-based trainer Mark Tibbs to former two-weight world titleholder Steve Collins and his brother Paschal. After four wins and one draw, the fighter now feels his new training team has ironed out the flaws and added strings to his bow.

“I’m a lot more relaxed and that’s Steve and Paschal’s experience rubbing off on me,” Buglioni said. “I’m tighter with my defense and although I can box at range, these guys are also developing me into a very clever inside fighter. I’m utilizing my strengths and cutting down weaknesses.

“Steve and Paschal gained a lot of their experience in America, where so many great fighters have come from. They make sure that my sparring is top class and that has been a huge benefit for me.”

Chudinov (13-0, 10 knockouts) has had fewer fights than Buglioni but remains a solid betting favorite away from home. In May, the teak-tough Russian claimed a 12-round split decision over four-time middleweight titleholder Felix Sturm in Germany, a result which trumps anything on his future opponent’s resume.

“I think Sturm was made to order,” countered Buglioni. “He was a middleweight at the end of his career and was there to be beaten. Other than that Chudinov hasn’t faced any stiff competition.

“He throws a lot of shots and has a good work rate and although he does everything well, there is nothing exceptional about him. Chudinov is a good combination puncher who likes to plant his feet and if you stand in front of him he’ll tee off on you.

Buglioni continued, “I’ll be looking to counterpunch in this fight. I have the height and the reach on him and when he overcommits, I’ll be waiting with the right hands and left hooks. When I start landing, I know I can hurt him.” 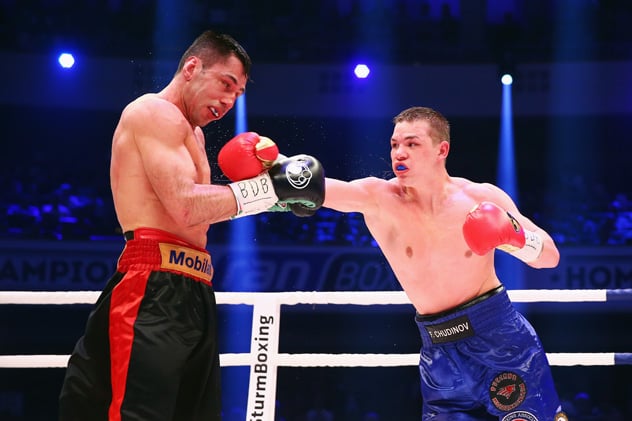 Fedor Chudinov (R) punching his way to a breakout victory over Felix Sturm in May 2015. Photo by Alex Grimm/Bongarts-Getty Images.

Chudinov, rated No. 9 by THE RING at 168 pounds, has appeared very dismissive of Buglioni’s chances during the extended buildup to Saturday’s bout. Essentially the 28-year-old views the Londoner as a stepping stone to bigger game.

“If that’s what he thinks then fantastic,” said an excited Buglioni. “If Chudinov is really looking past me then why didn’t he take the fight last time? If it’s so easy, why not come over and beat me with the injury? They’ve also drafted in Roy Jones Jr. as his trainer, so they’re clearly looking for an edge of some sort.

“It’s all too little too late for him and Chudinov is in deep water. He’s going to get taken out.”

Despite Buglioni suggesting that the fight will end inside the distance, he did explore the possibility that victory could involve going the full 12 for the first time. If successful he can delve deep into what is currently a star-studded division, at home and abroad.

Buglioni said, “I’m just looking to win the fight. If I catch Chudinov and hurt him then I’ll jump all over him and I’m a good finisher. Still, if he can take my shots for 12 rounds then I’ll make sure he’s in a sore state for a couple of months after the fight.

“Victory here would mean the world to me. This could be the first of many big fights. I want to fight the James DeGales, the George Groves’, the Martin Murrays, the Callum Smiths and the Rocky Fieldings. They’re all massive fights and I’ll be looking to cement my legacy against these guys.”