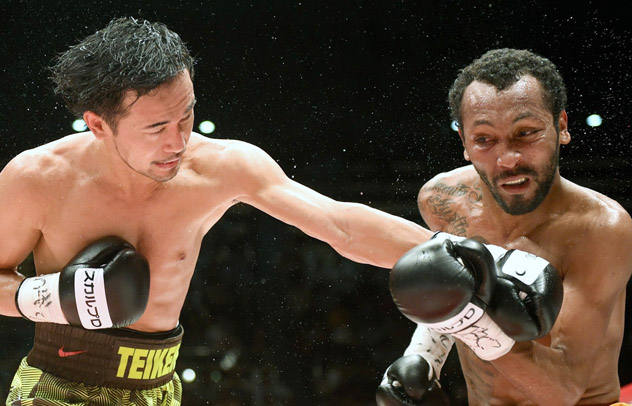 It was just the third time Yamanaka had gone the distance in 10 previous title fights.

Yamanaka, who was inserted at No. 9 on THE RING pound-for-pound list earlier this year, was facing a 30-year-old former WBA bantamweight and junior featherweight titleholder in Moreno, who hadn’t fought in a year following his sixth round technical decision loss to Juan Carlos Payano.

In the early goings, the bout became a battle of southpaw jabs as Moreno’s defensive skills negated Yamanaka’s heavy, but telegraphed left hands. Two judges had the fight 39-37 for the 32-year-old Yamanaka according to WBC open scoring after four rounds, while the third had it 38 each.

The accuracy of Moreno’s right jab began backing up Yamanaka in the middle rounds, but it wasn’t until round nine, when a sweeping right hook caught the Japanese puncher squared up, that one of the fighters appeared hurt.

Yamanaka survived, and sensing his title slipping from him in his ninth defense, came out seeking to end the fight with one blow. The numbers game began to pay dividends and an exhausted looking Moreno appeared ready to wilt, but it was Yamanaka’s turn to appear gassed in round 11. Yamanaka closed the fight as the aggressor in round 12.