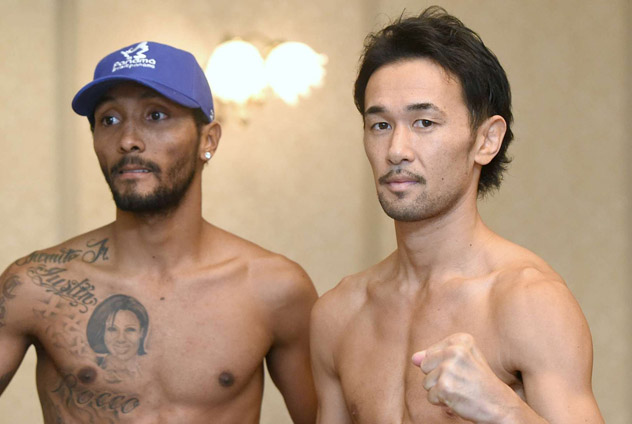 This past week was about as quiet as it gets in the boxing world. Thus, we’ll look forward here to a busier week that could produce changes to the RING Ratings.

The most intriguing fight takes place Tuesday in Tokyo, where No. 1 bantamweight Shinsuke Yamanaka (No. 9 pound for pound) will defend his WBC title against slick No. 3 118-pounder Anselmo Moreno.

Yamanaka (23-0-2, 17 knockouts) obviously is the hotter of the two. The Japanese fighter has won his last 18 outings against some of the best little men in the world and is one of the longest-reigning titleholders, as he’ll be making his ninth defense.

Meanwhile, Moreno (35-3-1, 12 KOs) is 2-2 in his last four fights and lost to Juan Carlos Payano in his last outing, two reasons this fight isn’t for the RING championship.

However, the former WBA titleholder’s losses might not be as telling as some believe. He lost a clear decision to Abner Mares in November 2012 but went up to junior featherweight for that fight, which can be considered a mitigating factor.

And one could argue that Moreno’s technical-decision loss to Juan Carlos Payano almost exactly a year ago – his last fight – was inconclusive, as the fight was stopped after six rounds because of a cut over Payano’s eye that was caused by an accidental head butt.

Bottom line: We’re going to get a very idea of where Moreno stands after he fights Yamanaka.

Flyweight Juan Francisco Estrada is in a similar position to Yamanaka, a No. 1-rated fighter taking on an opponent intent on proving he remains an elite fighter.

Estrada fights unrated Hernan Marquez on Saturday in Puerto Penasco, Mexico. Marquez (39-5-1, 28 KOs) is only 5-3-1 in his last nine fights, although the former flyweight titleholder has won his last two fights against marginal opponents.

Estrada (32-2, 23 KOs) is on a roll, having won two 112-pound titles and six fights in a row since giving Roman Gonzalez a tough fight in 2012. He could be too much for Marquez at this point.

Also in action this weekend is WBC heavyweight titleholder Deontay Wilder, who faces Johann Duhaupas (unrated) in the second defense of his belt Saturday in Birmingham, Alabama.

Duhaupas (32-2, 20 KOs) is a tall (6 feet 5 inches) Frenchman who is coming off the only meaningful victory of his career, a majority decision over Manuel Charr in April. He isn’t expected to survive long against Wilder (34-0, 33 KOs).

These are this week’s changes:

The future of No. 6 Malcolm Tunacao (35-3-3, 20 KOs) appears to be in question after he allegedly was attacked with a machete-like weapon in a domestic dispute on Wednesday in the Philippines.

He reportedly was in stable condition in a hospital on Wednesday but it is unclear when or even if he will be able to return to boxing. Also, he hasn’t fought in more than a year, which is grounds for removal based on our rules.

Thus, Tunacao has been removed from the ratings. If he is able to return to the ring and is successful, he will receive due consideration from the Ratings Panel and Editorial Board.

No. 1 Hekkie Budler (29-1, 9 KOs) defeated Simphiwe Khonco (unrated) by a unanimous decision Saturday in South Africa to retain his position.