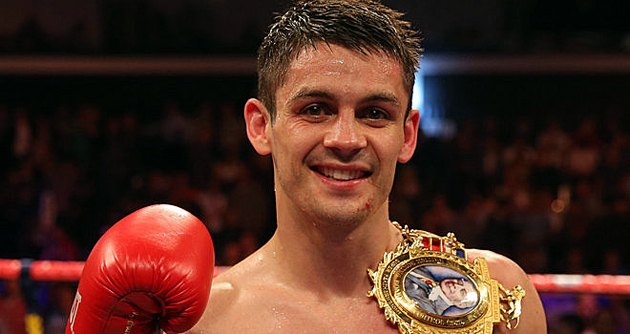 British boxer-puncher Stephen Smith kept his dreams alive by scoring a sixth-round stoppage over Devis Boschiero in a final eliminator for the IBF junior lightweight title in Liverpool, England, on Saturday.

Smith (23-1, 13 knockouts) dropped Boschiero in the second with a flush right hook counter and then swarmed his man to score another knockdown in the same session. The Italian did well to recover but two knockdowns, courtesy of well-placed left hooks to the body, ended the contest in the sixth.

“I’m over the moon,” said Smith when interviewed by Sky Sports in the UK. “I felt physically stronger than him but had to stick to my boxing in order to win. I did most of what my trainer (Joe Gallagher) wanted me to do and I think he’ll be happy with that.

“I’m adamant now that I will fulfill my potential and become world champion.”

Smith’s lone career setback was an eighth-round stoppage defeat to Welsh sensation Lee Selby in 2011. Since then he’s posted 11 straight victories and is now poised to challenge IBF titleholder Jose Pedraza, should the Puerto Rican come through his first defense against Ednar Cherry on Oct. 3.

Promoter Eddie Hearn said, “Stephen will be next in line and can go to sleep knowing that his next fight will be for the world title. That was a career best performance, much needed, and he’s definitely announced himself on the world stage.”

Boschiero, a former European titleholder and world title challenger, had never been stopped in 41 prior outings.

In a big upset, rising junior welterweight prospect Bradley Saunders was disqualified for a blatant head-butt on French opponent Renald Garrido. The official time was 2:53 of Round 6.

Saunders (12-1, 9 KOs) was under heavy fire from the start and struggled to match the visitor’s pace at any time during the scheduled eight rounder. The former Beijing Olympian was bundled to the canvas in the sixth following a series of combinations and committed the foul shortly after rising.

During his post-fight interview Saunders claimed that he had damaged both hands in Round 2 and implied that he reacted out of frustration. Regardless, this is a horrible setback for the highly touted 29 year old who is promoted by Matchroom Boxing.