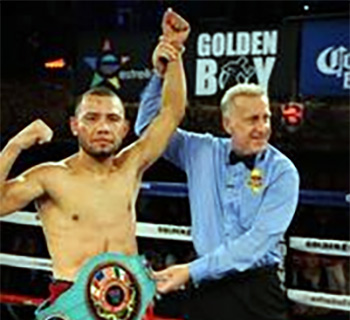 The 28-year-old Tijuana native was not expected to beat the talented 23-year-old prospect from Puerto Rico but the experienced southpaw was able to land his left cross from the opening round of the scheduled 10 rounder that was televised on Estrella TV and streamed live on RingTVLive.com.

Quintero (28-6, 24 knockouts), who worked his jab and utilized more lateral movement than expected, picked his spots to let his hands go in the early rounds of the bout. However, he went on the attack in Round 4, backing Fontanez (16-2, 12 KOs) to the ropes and forcing heated exchanges. Quintero clipped Fontanez with a left cross midway though Round 5 and dropped the backpedaling Caguas native in the final minute before the prospect’s corner (headed by former lightweight contender Jose Cotto) tossed in the towel.

It was a must-win fight for Quintero, who had lost two fights (by stoppage) in four bouts since dropping a split decision to Miguel Vazquez in a bid for the IBF lightweight title in October 2012.

In the opening bout of the Estrella TV broadcast, Colombian bantamweight prospect Oscar Negrete (12-0, 4 KOs) stopped Jose Estrella (17-8-1, 10 KOs) after Round 6 of their scheduled eight rounder. The corner of Estrella, a 25 year old from Tijuana, decided their fighter had had enough after being outworked and outclassed for six rounds.

[Editor’s note: the Estrella TV portion of broadcast and the four-bout undercard can be watched On Demand on RingTVLive.com.]

Emilio Sanchez, a 21-year-old junior featherweight prospect from L.A., improved to 10-0 (7 KOs) with a third-round stoppage of Juan Sandoval (7-17-1, 4 KOs), a journeyman from San Bernadino.

Francisco Esparza, a 20-year-old lightweight from Las Vegas, won his pro debut with a four-round decision over Carlos Gonzalez (1-8), of Bell, California.

And in the opening bout of the card, Oscar Duarte, of Parral, Mexico, won a four-round split decision over previously unbeaten Alejandro Salinas (3-1, 3 KOs), a 20-year-old lightweight prospect from Youngstown, Ohio. The 19-year-old Mexican, who took the fight on three days notice, scored a knockdown in Round 2.