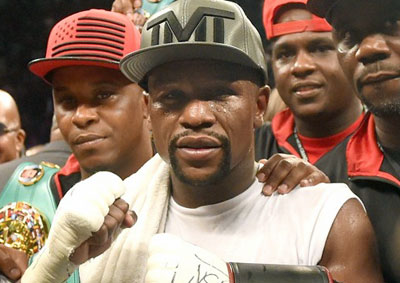 Floyd Mayweather Jr.: If that was Mayweather’s final fight, he went out as he fought for most of the past decade-plus: dominating but with precious little drama. He did to Berto what you’d expect a fighter of his ability to do to an opponent who was 3-3 in his previous six fights; he toyed with him like a cat might play with a tenacious bug to win an uncompetitive fight by a landslide Saturday in Las Vegas. Mayweather had fun; we didn’t. Par for the course. For the umpteenth time, that doesn’t mean we shouldn’t appreciate Mayweather’s ability. The man is an absolute master at the hit-and-not-get-hit objective of the sport. No one did that better than him since Roy Jones Jr. was at his best. His defensive skills are otherworldly at 38. Berto landed 17 percent of his punches, which is typical of a Mayweather opponent. That remains astounding. I’m in the gargantuan camp of those who never found Mayweather entertaining in the ring, though. I appreciate sublime technicians but I adore warriors, fearless men and women who take risks to give the fans what they crave: action. Mayweather was never, ever that type of fighter. He’s a chess player and chess isn’t much of a spectator sport. For Mayweather, it always came down to the inspiration for his nickname: “Money.” He did what it took to win and promoted himself in a manner than rivaled his boxing proficiency. That’s special. I applaud Mayweather on a magnificent career. He was truly great. And truly boring.

Andre Berto: No one should feel sorry for Berto (30-4, 23 KOs). The two-time welterweight titleholder was painted by the media – traditional and social – as a pathetic opponent for the No. 1 fighter in the world, a mediocre pug who did nothing to deserve this opportunity. And his performance justified that perception: He was bad, really bad. He landed 83 punches, according to Showtime statistics. That’s not even seven per round. So why wasn’t Berto the least bit upset after the fight? Well, first of all, he knows he’s in good company. Mayweather has embarrassed a looooooooooong list of capable opponents. Sometimes you just have to shrug and acknowledge you were in over your head. And, much more important, Berto earned a reported $4 million for the fight. That’s roughly 80 times more than the earnings of the average American household. I think most people would take a few punches and endure a little humiliation on national television for that kind of cash. He really didn’t take much of a beating, either. Mayweather landed only 19.3 punches per round, which doesn’t exactly equate to a pounding. And, since no one expected much from him, his stock didn’t take a beating either. So, all in all, it was actually a pretty good night for one of the sport’s good guys. Or at least as good as it gets for a badly outclassed fighter.

Orlando Salido vs. Rocky Martinez: Salido turned in a remarkable performance on the Mayweather-Berto card, regardless of the scoring. The inhuman punching machine fired off 1,037 shots toward all legal targets and landed 285 – almost 100 more than Martinez’s 189 – in a chilling display of viciousness and stamina. Then the judges screwed it up, scoring the fight a split draw that allowed Martinez to retain his WBO 130-pound title and stole an important victory from Salido. The fight was both competitive and very entertaining, as Martinez got in plenty of his own licks. That included a knockdown in the third round. The Puerto Rican simply couldn’t keep Salido off him for the vast majority of the fight. As a result, Martinez very clearly absorbed more damage than Salido did. For what it’s worth, I scored it 116-112 for Salido, eight rounds to four. The official scores were 115-113 for Martinez, 115-113 for Salido and 114-114, making it a draw. I felt terrible for Salido, who once again laid it all on the line and thought he had done more than enough to avenge a unanimous-decision loss to Martinez that cost him the title in April. That’s boxing. The saving grace here might be this: If ever a 2-0 series called for a third fight, this is it. Let’s hope Salido gets another shot at his rival. I know the fans would buy into it.

Peter Quillin vs. Michael Zerafa: Quillin (32-0-1, 23 KOs) reportedly weighed 182 pounds on Saturday, a day after weighing in at 160 on Friday. That’s 19 pounds over the agreed-upon catchweight of 163 and reportedly 14 more than Zerafa weighed when they walked into the ring. The result wasn’t surprising: Quillin scored a brutal fifth-round knockout that sent a semi-conscious Zerafa to the hospital. It reminded me of the infamous Arturo Gatti-Joey Gamache fight, in which Gatti reportedly outweighed his opponent by 15 pounds for a welterweight bout on fight night. Gamache didn’t last two rounds and never fought again. Zerafa (17-2, 9 KOs) wasn’t seriously injured but the weight difference and result once again raise questions about day-before weigh-ins. I support them because, with same-day weigh-ins, too many boxers would walk into the ring dehydrated after struggling to make weight. That doesn’t mean wide weight disparities on fight night should be acceptable. Every jurisdiction should set a limit on the number of pounds a fighter is allowed to gain between the weigh-in and the fight, the exception being heavyweights. The limit could be a percentage of the weight limit in each division. A reasonable percentage might be 7.5. That would be 12 pounds for middleweights, which would establish a ceiling of 172 pounds. Then no one would be in the position Zerafa was in on Saturday night.

Do I believe Mayweather fought for the last time on Saturday? No. He’s too good and too much money remains on the table. And I don’t believe he’ll wait long to fight again. He’s 38. He knows he doesn’t have much time left. Would I be shocked if he never fought again? Also no. The smart thing to do would be to walk away now and he’s not stupid. The problem is that’s a very difficult thing for a fighter to do, even that fighter. ÔÇª Quillin apparently will challenge WBA “regular” middleweight titleholder Daniel Jacobs (30-1, 27 KOs) on Dec. 5 in Brooklyn. Let’s hope Qullin doesn’t weigh 250 pounds on fight night. ÔÇª RING and WBC light heavyweight champ Adonis Stevenson stopped Tommy Karpency in the third round on Friday in Toronto. Now, we hope, it’s on to a real challenge. Sergey Kovalev? Jean Pascal? Artur Beterbiev? Adonis, fight someone – anyone – we can get excited about. ÔÇª A number of important fights took place on Saturday. Here’s a run-down. ÔÇª Badou Jack defeated George Groves by a split decision to retain his WBC super middleweight title on the Mayweather-Berto card. Jack (20-1-1, 12 KOs) looked pretty good but I don’t think he’s special in any way. Groves (21-3, 16 KOs) has now failed in three attempts to win a world title, after falling short twice against Carl Froch. I wonder whether he’s the type who will always come up just short. At least he didn’t get stopped this time. ÔÇª Jonathan Oquendo (26-4, 16 knockouts) defeated Jhonny Gonzalez (58-10, 29 KOs) by a majority decision in an entertaining, seemingly close 10-round junior lightweight bout on the Mayweather-Berto card. That’s why Robert Hoyle’s card surprised me: 98-90, eight rounds to two, for Oquendo. Gonzalez didn’t deserve that. He has now lost two of his last three fights. ÔÇª

I was stunned at how bad (read: old) Cornelius Bundrage (34-6, 19 KOs) looked against Jermall Charlo (22-0, 17 KOs) in defense of his IBF junior middleweight title on the Qullin-Zerafa card. Charlo put Bundrage down once in the first round, once in the second and twice more in the third, prompting merciful referee Johnny Callas to stop the slaughter. Kudos to Charlo, who looked terrific in winning his first major belt. Bundrage, 42, said afterward that he’d be back. I’m not sure that’s a good idea. ÔÇª Former U.S. Olympian Marcus Browne (16-0, 12 KOs) stopped Gabriel Campillo (25-8-1, 12 KOs) 55 seconds into their light heavyweight fight, another mismatch on the very weak Quillin-Zerafa card. Campillo is 4-5 in his last nine fights, including four KO losses. He’s no longer a viable opponent. Please stop treating him as such. ÔÇª Another former U.S. Olympian, Errol Spence Jr., stopped Chris van Heerden (23-2-1, 12 KOs) in eight rounds on the Stevenson-Karpency card. Spence (18-0, 15 KOs) is special. Can’t wait for him to take the next step in his career. Ditto for Olympic champion Anthony Joshua (14-0, 14 KOs), who stopped Gary Cornish (21-1, 12 KOs) 1:37 into their heavyweight fight in London. Spence and Joshua are near-future stars.