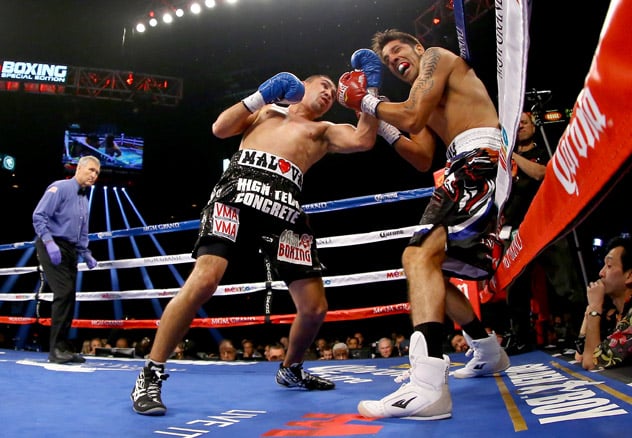 Humberto Soto (L) pins John Molina to the ropes on his way to a 10-round unanimous decision win in Las Vegas on Sept. 13, 2014. Photo by Al Bello/Getty Images

Former two-division champion Humberto Soto will face up-and-coming Antonio Orozco in an intriguing, junior welterweight crossroads fight at the StubHub Center, Carson, Calif. on Oct. 3 on HBO. It will be chief support to Lucas Matthysse vs. Viktor Postol. who will clash for the vacant WBC 140-pound title.

“They offered me this fight and I was interested in fighting Antonio because he’s an undefeated, young, strong, hungry fighter,” Soto told RingTV.com last week through Cecilia Zuniga of Golden Boy Promotions. “He’s also a fighter [stylistically] I like to fight. He comes forward and he won’t back down. The fans are the ones who will come out winning from this fight because I know it will be an exciting event for them.”

The 35-year-old Los Mochis native had been due to face another young, unbeaten up-and-comer in the form of Frankie Gomez back in May on the undercard of Canelo Alvarez-James Kirkland.

Soto had done his part in making weight but Gomez failed miserably – coming in 6¾ pounds above the agreed weight. The fight was canceled. It is believed that Soto still received part of his purse and HBO kept faith in him.

“When the whole Frankie Gomez thing happened, I was very frustrated because I was ready,” he said of the emotional rollercoaster he endured. “I was in good condition. I was responsible but, at the same time, I am very grateful that HBO still gave me the opportunity to come back on the network and trust me to deliver a good fight.”

The 76-fight veteran is preparing for the Orozco fight at altitude in Toluca, just outside Mexico City. He is fully aware that if he can take Orozco’s unbeaten record (22-0, 15 KOs), he’ll enhance his position further in his attempt to capture another world title but, for now, remains steadfast.

“Right now, we’re really focused on facing Antonio Orozco,” he said. “My focus is that I fight him and look good fighting him and secure a win. I also don’t want to get ahead of myself and thinking of a third world title at this point but, once I get past Orozco, definitely that’s what I’m going to think of next.”

It is 13 months since Soto last fought, when he impressively out-boxed the dangerous John Molina Jr.

He doesn’t see the extended absence as a problem.

“I feel really good, very calm and concentrated,” he explained. “What has helped me in the time off is that I haven’t stopped going to the gym. I haven’t stopped conditioning and training. My team and I are hungry to come back to the ring and show fans that I’m still a prominent fighter in the weight class.”