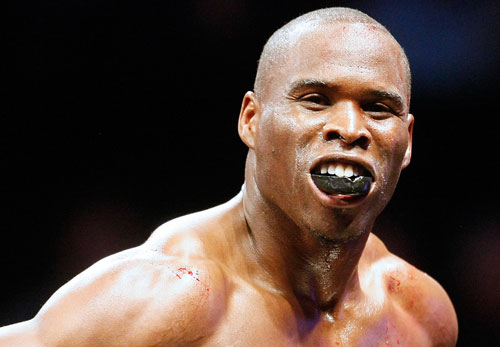 The following press release was issued by Premier Boxing Champions:

It’s been 30 years since a world championship title fight was fought in Toronto – and the exuberant crowd at Ricoh Coliseum welcomed boxing back with hard-hitting action on the main televised card of the Premier Boxing Champions on Spike.

“Superman” Adonis Stevenson (26-1), the light heavyweight world champion put his coveted belt on the line in front of his fellow Canadian countrymen against the gritty American challenger Tommy Karpency (25-4-1). Attempting to be kryptonite to “Superman,” Karpency was out-classed by the stronger and quicker Stevenson. In the first round, Stevenson began his onslaught with a big left that buckled Karpency’s legs. A straight left hand at the end of round 2 knocked Karpency to his knees. With a boisterous partisan crowd behind him, Stevenson finished Karpency off with a devastating TKO at 21 seconds of round 3.

In the co-feature, Errol Spence Jr. (17-0) put his unblemished record on the line in the opening bout of the main card against the dangerous South African welterweight Chris Van Heerden (

23-1-1) riding an 9-fight winning streak.
Spence, a 2012 Olympian, showed off his world- class pedigree by pounding his opponent with brutal body shots and a flurry of jabs that nearly closed Van Heerden’s left eye. After two knockdowns in the 7th round, Spence’s dominating performance was punctuated by a flurry of punches that led referee Alan Huggins to stop the fight at 50 seconds of round 8.

Spence will now set his sights on moving up the ladder in the talented welterweight division occupied by big names such as Keith Thurman and Shawn Porter.

When asked in the ring what is next for him he responded “I want to fight anyone in the top 10- I think I deserve it.”

32-10-2) from Brooklyn, NY battled undefeated prospect Prichard Colon (15-0) of Puerto Rico. Colon showed off his power as he dominated his veteran opponent – ending the bout at 1:03 in the 4th round with a punishing knockout. The rising star, who honored the victims of 9-11 on his robe, is bullish on his future. “It’s great to put a win over a former world champion on my resume.”