Ishe Smith: “Thomas Hauser has been after Floyd Mayweather for years” 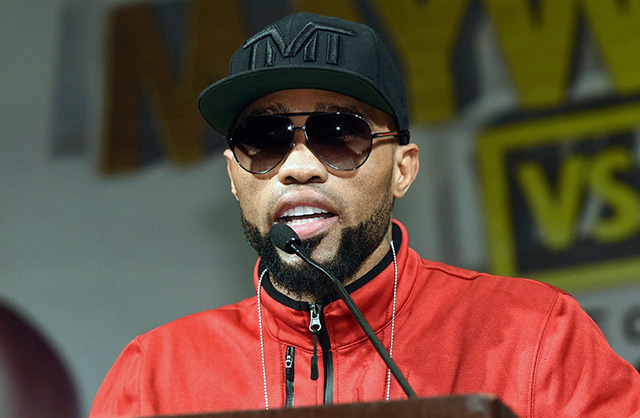 Mayweather Promotions’ 37-year-old veteran Ishe Smith (27-7, 12 knockouts) was supposed to talk about his Saturday night showdown with Vanes Martirosyan (35-2-1, 21 KOs) at Thursday’s Mayweather-Berto undercard news conference. But with all of the controversy surrounding his promoter, he decided to lace up his verbal gloves and go to war with the media rather than discuss his bout with Martirosyan.

“It was the IV story that set me off along with some things going on with me,” Smith said when asked what prompted him to go on his tirade at yesterday’s presser.

A report by Thomas Houser questioning Mayweather and the United States Anti-Doping Agency’s relationship set the internet on fire earlier this week and was capped off by an IV that Mayweather took after the weigh in prior to his mega fight with Manny Pacquiao that allegedly didn’t receive a formal exemption.

“The IV thing just really sent me over the edge. We’re talking about something that athletes, not just boxers, do all the time. But when it’s Floyd Mayweather it becomes a big deal. Enough is enough.”

Smith admittedly stated he didn’t know much about the when the exemption was applied for but believes that his promoter did no wrong by rehydrating after the weigh in.

“It’s a witch hunt,” Smith said about the article. “Thomas Hauser has been after Floyd Mayweather for years. If his testosterone was abnormal, I get it. But we’re talking about an IV. He felt dehydrated, his urine was dark and he needed an IV. What has changed about him wanting to clean up the sport?”

Smith stopped short of suggesting race has something to do with the way Mayweather is handled by the media, but feels that other fighters who have had past indiscretions with drugs and women have been forgiven for their actions.

“Why didn’t they go after Manny Pacquiao this tough?” Smith asked. “You guys forgave him. Then you have the guy who admits to cheating on his wife, did drugs and wore fishnets (Oscar De La Hoya) and you treat him like he’s the savior of boxing. But when it comes to my promoter, who has made three black kids with different backgrounds (himself, Swedish fighter Badou Jack and Mickey Bey) into champions. He gets no praise for that whatsoever.”

Smith also questioned the timing of the article with RingTV.com and says that Mayweather will always be in a no-win situation when it comes to certain sportswriters.

“It’s crazy that this was brought up right before the fight because why couldn’t they do this a while ago?” Smith asked incredulously. “He’s bought 90 percent of us cars, paid our rent and taken care of us in our times of need. He doesn’t care if that doesn’t get reported. He does a lot of charity work but he doesn’t want us to run to the media with those stories. It’s frustrating for us and I have to speak out about it because some of the criticism he gets just isn’t fair. He’s criticized for his fighting style yet he’s undefeated. You want him to get hit to make you guys happy? It’s just really crazy to me.”

But Smith realizes that he still has a fight to focus on this Saturday with Vanes Martirosyan and says that his rant at the podium won’t affect his preparation whatsoever.

“I know I still have a job to do on Saturday night but I had to get that off my chest, ” Smith says. “It’s going to be a hell of a fight. I have to win. I have no choice.”