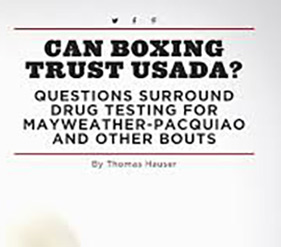 The following press release was issued by Showtime Sports and CBS on Thursday:

For the first time ever, fans will be able to watch a SHOWTIME PPV boxing event on their computers and mobile devices via cbs.com/fight, as Floyd Mayweather puts his undefeated record on the line, in what Mayweather says will be his final fight, against two-time world champion Andre Berto this Saturday (8 p.m. ET / 5 p.m. PT).

In addition to the main event, the live stream will also feature three undercard fights. Roman “Rocky” Martinez will risk his WBO Junior Lightweight title in a rematch of a Fight of the Year candidate against the boxer he dethroned, four-time world champion Orlando “Siri” Salido. In addition, Badou Jack “The Ripper” will make the first defense of his WBC Super Middleweight World title against mandatory challenger “Saint” George Groves, and Mexico’s Jhonny Gonzalez will face Puerto Rico’s Jonathan Oquendo in a 10-round super featherweight bout.

With the pay-per-view purchase of the fight online, U.S.-based users will also receive a three month free trial of CBS All Access, the subscription video on demand and live streaming service for the CBS Television Network. For more information on CBS All Access, visit cbs.com/allaccess.

Mayweather vs. Berto, a 12-round welterweight world championship bout for Mayweather’s WBC and WBA 147-pound titles, is promoted by Mayweather Promotions, LLC and sponsored by Tecate. The event will take place Saturday, September 12 at MGM Grand in Las Vegas and will be produced and distributed by SHOWTIME PPV.