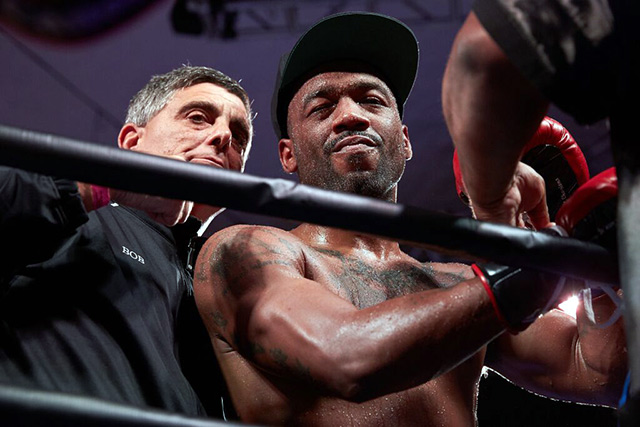 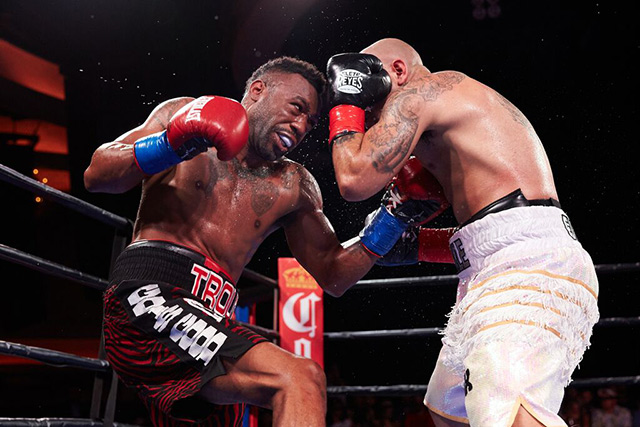 The following press release is from Premier Boxing Champions, which promoted Tuesday’s show headlined by Austin Trout-Joey Hernandez in association with TGB Promotions:

Working behind a piston-like jab from the opening bell, Trout of Las Cruces, NM scored at will and frustrated Hernandez of Miami, FL throughout the fight.
In the fourth stanza Hernandez was deducted a point by referee Jack Reiss for body slamming Trout to the canvas.
Trout ended the fight in style as a barrage of punches sent Hernandez stumbling to the canvas where he was counted out at the 3:00 mark of the sixth round. Scores at the time of the stoppage were 50-44 on all three scorecards.
Said Trout after the victory:
“We got a good win with a knockout. I’m happy to be here. I want to thank the fans for showing up. If you didn’t come for me this time, you will next time.
“I’m trying to be the best in my class. I think it’s me and if people don’t believe it, they will.
“I thought I was breaking him down. I was watching his body language and there was
No Doubt I was wearing him down.
(On the body slam) “He wasn’t winning. So it wasn’t like there was a need for the flash. He was getting desperate. Maybe he was hoping I got hurt with the body slam but that wasn’t the case.
“Truly my best is yet to come. At the age of 29, I am a better fighter than I’ve been and I will continue to be a better fighter than I was tonight.
“It’s an honor to fight in the Tuesday night PBC on FS1 debut. I can’t wait to get back in the ring. I would like it to be before the end of the year against a world champion or top name in the division.”
Stated Hernandez in defeat:
“From the first round, I had no legs. I was conditioned, but the day of the weigh-in I had to lose nine pounds. It is hard to come back from that.
“I’m going back to the drawing board after this rough loss. My mind wanted to do it, but my body couldn’t get it done.
“I was trying to catch him because he wasn’t really hurting me until the body shots that ended it.
“I’m too good a fighter to become a full blown opponent.”
In the co-featured, scheduled eight rounder, undefeated light heavyweight Ahmed Elbiali, 12-0 (11 KOs) continued to shine, drilling Brazilian Fabiano Pena, 11-3-1 (8 KOs) to the canvas with a massive right halt, which ended the bout. Time of the stoppage was 1:15 of the opening stanza.
Said Elbiali after his first round KO:
“I didn’t have enough time to really show what I can do.
“I want to show people I can box. I do have great defense. I have great footwork.
“I’m sure one day I will go toe-to-toe with a great fighter, but until that day comes, I am going to keep knocking people out.
Opening the telecast featherweights’ waged war as Jorge Lara, 27-0-2 (19KOs) of Guadalajara, Mexico and Jesus Rojas, 22-1-2 (15KOs) of Caguas, Puerto Rico battled in a scheduled ten round tilt.
Lara was badly cut twice during the bout from a clash off heads. Following the sixth round the bout was stopped as Lara stated to the referee he was unable to see.
Scorecard tallies were 57-57 from all three judges resulting in a very disappointing technical draw.
Stated Rojas after the draw:
“I came here to fight like a man and I’m very disappointed. I wish it didn’t end that way, with an accidental head butt.
“I am definitely looking for a rematch, but I want it to be in Puerto Rico. I came to his house with his crowd and now I want to box and bang on the island.
Said Lara:
“I’m very upset with the way this went. Rojas is a dirty fighter. I came to fight and show people what this sport is all about.
“My eye just kept getting worse and worse as the fight went on. There was no way I could continue.”