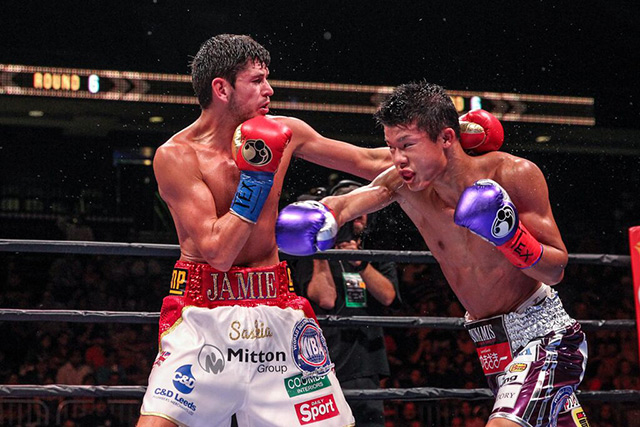 It takes a lot to rile up Jamie McDonnell. The immensely proud bantamweight from Doncaster, England is as laid back as it gets but if you tell him he lost the biggest fight of his career when three ringside judges had him winning comfortably, you just might have hit the wrong button.

On Sunday, McDonnell, who is rated No. 4 by THE RING at 118 pounds, defeated Tomoki Kameda by unanimous decision for the second time in just over four months. The scores were 117-110, 116-111 and 115-112; tallies which suggested a dominant performance.

The only problem is that the commentary team working for Premier Boxing Champions, which included Paulie Malignaggi and Virgil Hunter, as well as several acclaimed writers, had Kameda winning the fight clearly. For the record, this reporter had McDonnell up 117-111.

“I won that fight by five or six points,” said McDonnell sharply. “I’d have given Kameda two or three rounds, so, in my view, I absolutely smashed him. When I knocked him down in the 12th, I thought, I’ll just get on my bike now because I’ve won this easily.

“It’s stupid to think that Kameda won. The seven and five-point margins, on two of the judge’s scorecards, were right. How anyone can have it close is beyond me. He landed some good single shots but was eating jabs and combinations all night. He was also hitting thin air whenever he came forward, which wasn’t very often.”

Dave Coldwell is manager and trainer for the 29-year-old McDonnell and was aghast to discover that US television had his man losing before the official decision was announced.

“I just thought, ‘Oh my God,'” Coldwell said. “In terms of scoring, Jamie was constantly throwing more and landing more, so there was only one winner in that fight. I’m gob-smacked that anyone could have it any other way.

“Jamie boxed brilliantly. A British fighter coming over to America and beating a top opponent is a big thing but to do it twice on the bounce is special. He was the underdog twice and, twice, he proved people wrong.”

McDonnell and the judges were of the opinion that the rematch was a much smoother ride than the first encounter. In May, the Englishman was floored heavily in the third round but rallied hard to get himself back into a fight that could have gone either way. Adjustments were required and, ultimately, implemented.

“The plan was to start faster than I did last time,” said McDonnell, who improved to 27-2-1 (12 knockouts). “I kept it tight and he couldn’t get his punches off because he didn’t have time or distance. It was so easy to push him back and use straight shots and Kameda wasn’t working hard enough in there.

“I actually thought I might get the stoppage but didn’t want to take too many risks because he carries a good punch. I felt so comfortable that there was no point changing anything.”

This reporter spoke to McDonnell and Coldwell during fight week and the pair hinted that the Kameda return would be McDonnell’s swansong at 118 pounds. The likes of Carl Frampton and Scott Quigg reside at junior featherweight and massive domestic matchups are there to be had.

Now on the back of what many feel was a career best performance, the inevitable move north could be delayed.

McDonnell said, “I think I’ll have one more at bantamweight because I breezed through this fight. I could have done 15 rounds against Kameda; that’s how easy it was. As long as it’s a big fight and big money, then I’m happy to stay at 118 pounds.”

Coldwell believes diligent preparation in and out of the gym is the reason McDonnell can still get the best out of himself at bantamweight.

“We’ve got a nutritionist called Dave Stache, from Sheffield, and he’s the best in the business,” said Coldwell confidently. “He had Jamie on a strict diet for seven weeks and, after the weigh-in, we had perfect recovery foods to replenish energy. Off this performance, I can see Jamie having one more fight at bantamweight; he was as strong as an ox.”

McDonnell, who has held British, Commonwealth, European and IBF titles, is classed by many as a perennial overachiever but the message from his camp is simple: They wouldn’t have it any other way.

“If people want to keep underestimating Jamie, then more fool them,” said Coldwell.