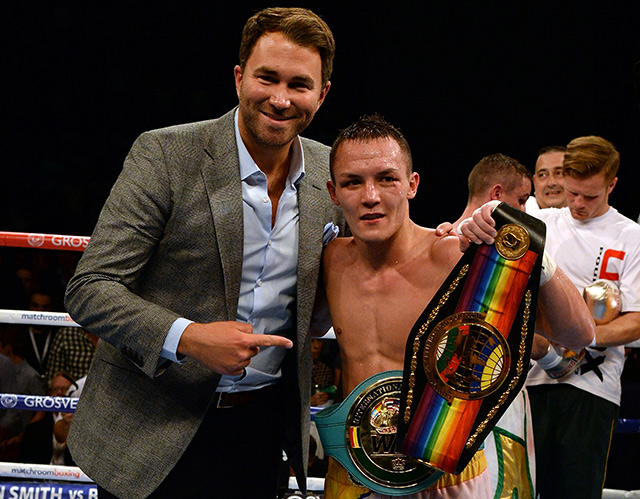 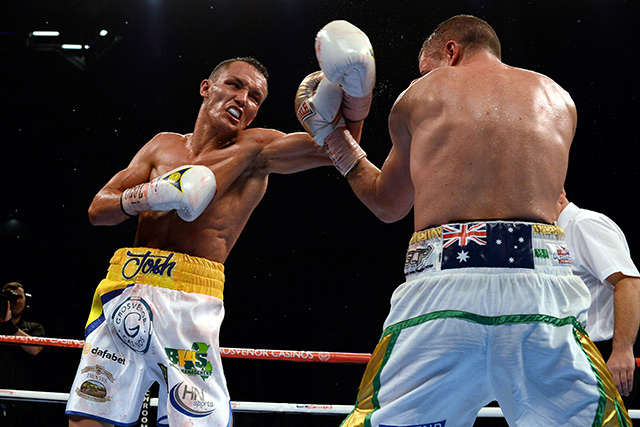 Rising British featherweight Josh Warrington scored a very impressive 12-round unanimous decision over Joel Brunker in Leeds, England, on Saturday and could be on course for a world title shot.

All three judges scored the bout 120-108 for a complete shutout.

In the past two years, Warrington has claimed British, Commonwealth and European belts and he doesn’t look too far away from world level. Brunker (28-1, 16 knockouts) was considered a serious threat coming in but at no point was he able to put a dent in the home favorite.

“I just wanted to prove I could box for 12 rounds,” said an elated Warrington when interviewed by Sky Sports in the UK. “Joel is a world-class opponent with a brilliant record and now we can work towards a big world title fight.”

Warrington was extremely effective against Brunker in the opening sessions and although he was made to work hard, his engine was more than up to the task. The left jab was constant and some well-timed combinations kept the teak tough Australian at bay.

In the fifth a deep cut opened on the left side of Brunker’s skull; the result of an accidental clash of heads. The wound was not in a dangerous place but plenty of Warrington’s punches continued to find the target and the visitor was landing less and less.

Another gash opened up around the right eye of Brunker in Round 10 and the situation was now hopeless. Warrington had an answer for every crude attack that the game Australian could muster and they usually came in the form of rapid combinations to the head.

Last October, Brunker was stopped in nine rounds by reigning IBF beltholder Lee Selby. Rumors abound that Warrington could challenge Selby for the title sometime in 2016 and tonight was a barometer of his worthiness. The 24 year old certainly passed the test but was he convincing enough to pose any threat to the talented Welshman?

Warrington (22-0, 4 knockouts) is obviously not regaled as a puncher but it should be noted that three of his previous six wins came by stoppage and his aggressive style could mesh well with the sophistication and skill that Selby brings to the table. Warrington has also become a very popular attraction in his home city of Leeds and such a bout would be huge domestically.

Promoter Eddie Hearn said, “Josh is a very modest guy but that was a world class performance. Lee Selby defends his title on Oct. 14 (against Fernando Montiel) and if he comes through there’s no reason why that fight can’t happen next year.” 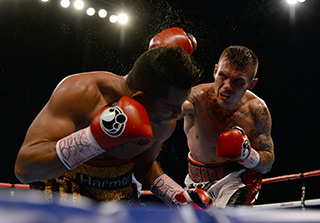 Murray (32-2-1, 15 KOs) scored seven official knockdowns against his opponent who continually touched down whenever he was caught by half a punch. Torres was on the canvas in every session that was contested and the referee eventually waved off the scheduled 12 rounder in disgust.

The 32-year-old Murray is determined to secure a world title shot at 168 pounds and would pose a real challenge to many of the top players in this weight class.

Two-time light heavyweight title challenger Tony Bellew defeated Latvian journeyman Arturs Kulikauskis in the fifth round of a cruiserweight contest which was scheduled for eight.

An unmotivated Bellew had real issues with his timing but gradually began to land meaty headshots which forced his southpaw opponent to retreat. A solid left hook began working well in the fifth and the referee made a mercy stoppage when Kulikauskis became reluctant to return fire.

“Tony will be taking on the winner of that fight,” said Eddie Hearn.