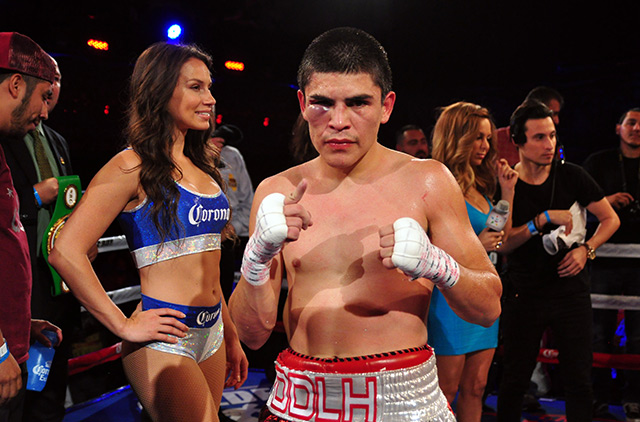 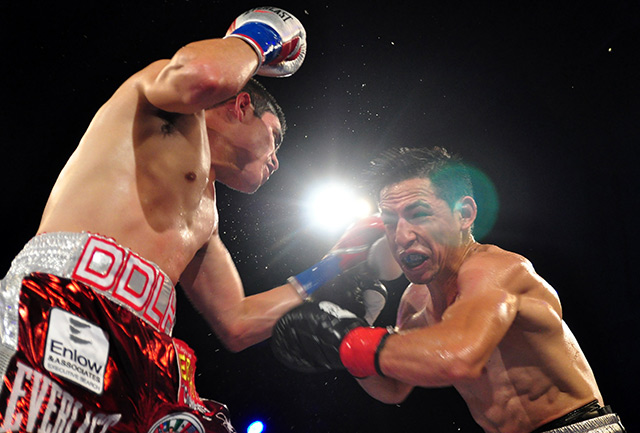 [Editor’s note: The Ring TV Live call of the three bouts televised on Estrella TV can be watched On Demand at RingTVLive.com]

LOS ANGELES – He may not have the mannerisms as his famous older cousin, but Diego De La Hoya is poised beyond his years.

That maturity was on display on Friday night at a sold-out Belasco Theater.

Facing a fighter with over four times as many pro fights as him, De La Hoya was very workmanlike in winning a 10-round unanimous decision over young veteran Jesus Ruiz.

While De La Hoya has fought modest opposition, he was taking a major step in competition against Ruiz, who lost to then-WBC 122-pound titleholder Leo Santa Cruz on Jan. 17.

With Oscar De La Hoya (his cousin and promoter) watching from ringside, De La Hoya demonstrated a rapidly-improving skill set. He was able to work behind a jab, throwing and landing two- and three-punch combinations. De La Hoya was able to set up counter or lead right hands, which he was able to score as well.

Ruiz was game, mostly working from the center of the ring. He looked to work the body of De La Hoya, but left himself exposed to being countered to the head.

De La Hoya suffered his first case of adversity during the fight, as he suffered a cut along his right eye in the seventh round. Replays showed the cut was opened from an inadvertent elbow by Ruiz.

De La Hoya’s corner was able to close the cut, allowing the 21 year old to continuing dictating the fight, making Ruiz miss by feinting and countering to the head.

While he remained in control during the second half of the fight, De La Hoya did display his power. De La Hoya landed a left hook that shook Ruiz midway through the ninth round. To his credit, Ruiz was able to hold on, fighting back until the final bell.

“Movement was a big part of our strategy,” said De La Hoya, who is managed by Joel De La Hoya. “So we conditioned (for the fight) so I could move around the ring. I thought I hurt him on a few occasions, especially with the uppercut.”

After what looked like an even first round, Tienda scored a knockdown at the beginning of the second round, although it looked as though Lopes tripped over Tienda’s lead foot.

The ‘knockdown’ did not seem to faze Lopes. The two-time Olympian from Brazil initiated most of the exchanges, throwing and landing lead left crosses to the head of Tienda.

Just as Lopes seemed to be in control of the fight, Tienda scored a legit knockdown in round five, this time landing a lead right cross to the chin of Lopes. Instead of following up, Lopes and Tienda turned the action into a sloppy affair during the second half of the fight, where both fighters tied each other up or would be pushed down to the canvas.

As the bout progressed, Tienda dealt with swelling underneath his right eye. While Tienda did all he could to press the fight, Lopes attempted to counter to the head with left crosses or right uppercuts.

“Every fight is a learning experience,” said Lopes after the fight. “It was my first time getting knocked down, but I stayed calm and I feel that was the difference in the fight.”

Gonzalez too much for Lizarraga

In the opening bout of the Estrella TV telecast, lightweight Christian Gonzalez demolished Luis Lizarraga in the second round.

After a slow opening round, Gonzalez began to walk Lizarraga down more aggressively. Gonzalez hurt Lizarraga with a left hook to the body, eventually dropping him with a hard left hook to the head. Lizarraga was able to beat the count, but his trainer stepped inside the ring, saving his fighter from what was likely further punishment. Referee Sharon Sands stopped the bout at 2:09.